A Tango in Auschwitz

"I'm still young, I want to live"; even in their darkest hour, the prisoners of the Nazi camps wrote songs of hope 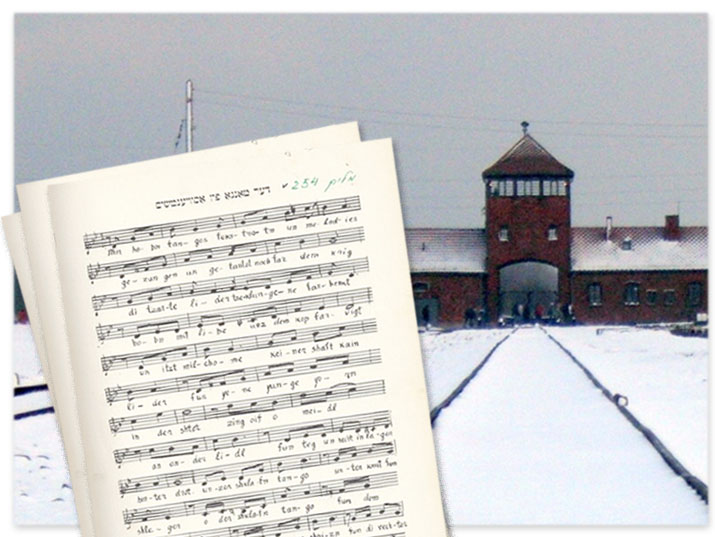 In the summer of 1948, Ben Stonehill arrived at the Hotel Marseilles in New York, a gathering point for Jewish refugees who had arrived in the United States after World War II. He brought with him heavy recording equipment and placed it in the hotel lobby. Why would an American Jew of Polish descent who worked for a living installing linoleum, carpets and wallpaper haul heavy recording machinery and set it up in the hotel lobby? The purpose was to record the refugees singing songs they remembered from their homelands; folk songs their parents sang; holiday songs from synagogue; songs from school and youth movements; and also – the songs they sang in the concentration and extermination camps, in the ghettos and in the hiding places, where they had spent the long years of war.

The songs that Stonehill recorded were stored in the archives of the YIVO Institute for Jewish Research dedicated to the documentation and preservation of a rich, pre-WWII Yiddish culture. The recordings eventually made their way to the National Sound Archive at the National Library of Israel. Among them are two songs that share a number of similarities. They provide a glimpse of moments of both despair and hope, conveyed through popular music of the 20th century’s first half.

The name of the first song essentially reveals the whole picture: Tango in Auschwitz. It is, indeed, quite a concise description. The song was written in Polish by a 12-year-old Polish girl named Irka Janowski. Unfortunately, we do not know much about her other than her name and age. We do know she was not Jewish and that she perished in one of the Auschwitz camps. The song she wrote was set to a well-known pre-war tango tune and had become popular among the prisoners of the camps in the extermination complex; many remembered it later as they were being recorded by Ben Stonehill’s equipment. 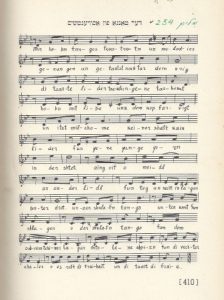 Janowski’s song and biography remind us of a facet that is usually neglected in the recollection of Auschwitz. The complex comprised several extermination camps and many labor camps, and among the prisoners were many non-Jews. Tens of thousands of Poles, Romanis and people of color, as well as French and Russian war prisoners were murdered at Auschwitz. Janowski’s lyrics (translated into Yiddish by survivors) speak of the Auschwitz prisoners, but, surprisingly, do not focus on Jews:

The black man soon takes up his mandolin,
and will soon start to strum his little tune here,
and the Englishman and Frenchman sing a melody,
so a trio will arise out of this sadness.


And also the Pole soon takes up his whistle
and he will emote to the world –
The song will light up the hearts
who are longing for the freedom they miss.

The song’s chorus ignites hope in the hearts of the listeners:

Tango in Auschwitz was not the only tango heard in the camps. Perhaps the musical genre, which grew extremely popular in Europe in the early 20th century, served as a reminder of pre-war life – a spark of hope that the war would eventually end, and life would return to normal. And so, in Stonehill’s collections another song was found, sharing many similarities with Janowski’s song, most notably – it, too, was a tango.

This song was probably written in Auschwitz, though its writer is unknown. This time the song was written in Yiddish, not Polish. The song’s name is “Oh I Used to Have a Father” (Oy gehat hob ikh eynmol eyn tatn) and it tells the story of an orphaned child whose parents were murdered in the notorious extermination camp. The soft, comforting melody of the tango rhythm soothes the pain of loss and lessens the sting of the harsh words that describe life in the camp. The end of the song, much like Tango in Auschwitz, maintains an optimistic note: The narrator declares that he is still young and therefore chooses life and will continue to live in spite of everything.

There are many similarities between these two recordings, which represent rare documentation of the extermination camp songs that gave the prisoners a bit of hope. Both songs were most likely written by young children. They both describe the harsh reality of life in the camp, yet they express true hope that the nightmare will soon end. They are the only two songs in the collection that explicitly mention the name ‘Auschwitz’. In both cases, pain and hope are accompanied by the tango rhythm, its origin far from the land of Poland. For those listening, the songs symbolize the hope that one day, everything might return to normal.

This article was written with the generous assistance of Dr. Gila Flam, a scholar of music in the Holocaust and the director of the Music Department at the National Library of Israel.

Bringing Darkness to Light: Singing Chanukah Songs Through the Holocaust