The Exceptional Lilli Henoch: The Sad Story of a Champion Athlete

Home > Life Before The Holocaust > The Exceptional Lilli Henoch: The Sad Story of a Champion Athlete
Diaspora

Lilli Henoch won championships and set new world records, but her accomplishments weren't enough to save her from the bullets of the Nazi Einsatzgruppen soldiers 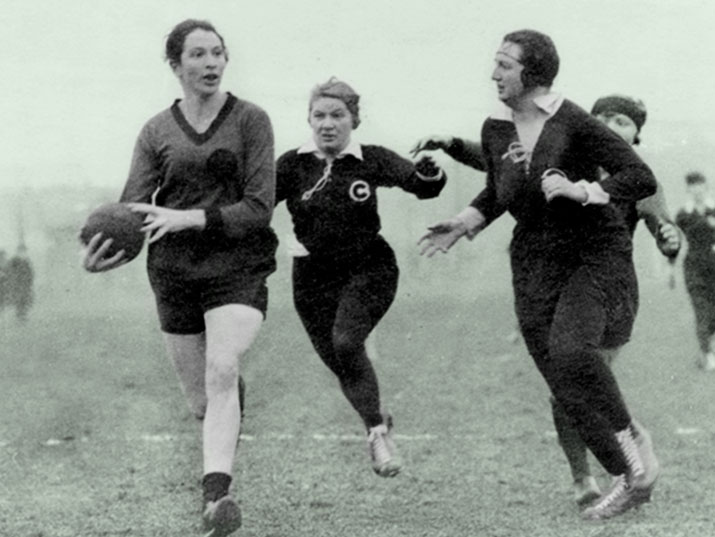 From the private collection of Martin-Heinz Ehlert

Lilli Henoch was an exceptional athlete. She was not only an outstanding sprinter, but also a long jumper. She not only set a shot put world record, she set another in the discus throw. Not only did she compete in individual fields of athletics, she was also a leader of women’s teams in both handball and hockey. Lilli Henoch was a ten-time German champion in various fields of athletics, a holder of world records – but she was also Jewish.

Lilli Henoch’s story may have a familiar ring to it. Some may recall the figure of Gretel Bergmann, a high jump champion, whom the Nazis banned from taking part in the1936 Berlin Summer Olympics. Many know the story of Béla Guttmann, a legendary soccer player and coach, who survived the concentration camps. Lilli Henoch’s story is even more tragic.

Henoch was born in 1899 in the city of Königsberg, East Prussia (now the Russian city of Kaliningrad), the second child in a middle-class Jewish family. From time to time, the family would host their friendly neighbor, Albert Einstein. From a young age, Lilli loved to jump and run, but life wasn’t all fun and games. Her father, Leo, passed away when she was only 13 years old. Several years later, the family moved to Berlin, and Lilli’s mother remarried. Lilli quickly joined the Berliner Sport-Club (BSC) and engaged in athletics, at a time when the field was considered “masculine” and inappropriate for women.

There, at the famous sports club laden with history and trophies, began the glorious career of one of the best and most versatile athletes in German history. For example, in 1924 alone, Henoch became the German national champion in four different fields: the shot put, the discus throw, the long jump, and the 4×100 meters relay. During this period, she set two discus throw world records, another world record in the shot put, and was part of the running team that achieved a world record in the 4×100 meter relay race in 1926. There are those who claim that her achievements, as well as the achievements of other German female athletes, were what encouraged the International Olympic Committee to approve women’s participation in athletics for the first time in the 1928 Olympics.

However, as if often the case in any new field of sport, by the time the Olympics took place in Amsterdam, other athletes had already bypassed her achievements, and Henoch did not take part. Nevertheless, Lilli Henoch continued to be a prominent figure in her Berliner Sport-Club. She was captain of the handball team (a sport that was actually regarded as “proper” for women at the time), and was considered one of the best-known athletes in Berlin. Lilli was so well-respected at the Berliner Sport-Club, that on January 18th, 1933, she was elected chairwoman of the women’s athletic section.

However, just like a multitude of brilliant scientists, famous artists, educators, and others – her achievements didn’t stop the Nazi government from banning her from athletic activity from the moment they came into power in 1933 – less than two weeks after Henoch was appointed to her prestigious position. She was forced to look for a new professional home. She then joined the Jüdischer Turn-und Sportclub (JTSC), an organization affiliated with non-Zionist, assimilated Jews. She played for the club’s handball team in the Jewish leagues of the 1930s, and won two championships. She also became a gymnastics teacher at a Jewish school in the city.

Years later, Lilli’s sister Susie said Henoch received an offer to move to the Netherlands and work there as a coach. Henoch refused, although it was already apparent that staying in Germany was dangerous. She preferred to stay in Berlin with her mother, who was widowed for the second time. In 1942, the mother and daughter were deported from Berlin and sent by train to Riga, in Latvia. There is contradictory information regarding what exactly happened next. However, what we do know for certain is that Lilli and her mother Rose were executed by Einsatzgruppen death squads and buried – with many others – in a mass grave in the woods near the Latvian city.

Thanks to the tireless efforts of one German scholar, Martin-Heinz Ehlert, the name of Lilli Henoch has been commemorated across Berlin. Several sports venues are named after her: a school gymnastics hall, a soccer field not far from the Jewish Museum, and a small street.

So why is Lilli Henoch’s name not so familiar here in Israel? Why is so little written about her in Hebrew? Perhaps this has something to do with the fact that Henoch was not a Zionist, and did not join a well-known Jewish and Zionist club, like Berlin’s highly successful Bar Kochba club. For Henoch, sport was not a political cause, but a passion, a pleasure, and a haven for her competitive nature. Lilli Henoch simply wished to jump and run.

Thanks to Ronen Dorfan for his assistance in writing this article.