Home > Zionism > Passing the Torch: The Maccabees of Berlin
Diaspora

More than 80 years after Jewish sports associations were outlawed by the Nazis, hundreds of German athletes still proudly wear the Star of David on their jerseys 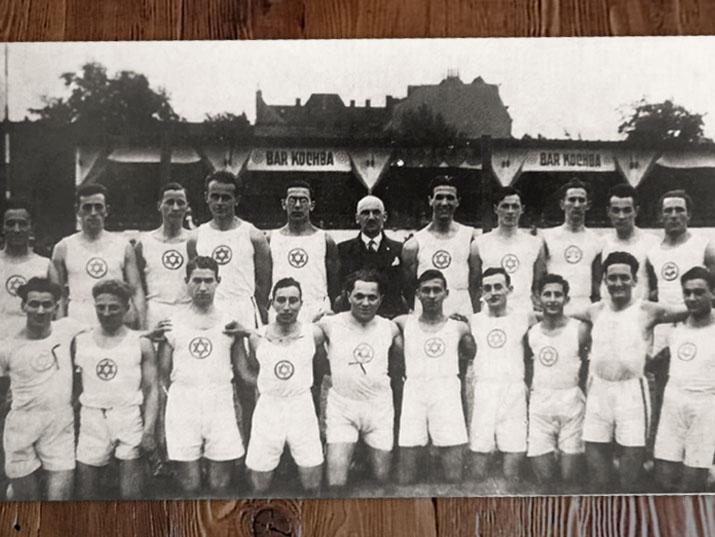 Not a day goes by that Israeli sports fans don’t read or hear the word ‘Maccabi.’ It is a name attached to dozens of Israeli teams in most sports played in the Jewish State. Much less familiar is the fact that there are still active teams in other parts of the world that proudly bear this name. Here we will tell the story of one of these – a little-known football (soccer) team from Berlin.

Indeed, in the year 2020, the Makkabi Berlin football team plays in the Berlin-Liga, a sixth-tier division which consists solely of clubs based in the German capital. True, this semi-professional organization doesn’t exactly pose a threat to the giants of German soccer, but it has a rich history which stretches back more than 120 years.

The team’s story begins with an event, or rather an idea, that sparked the creation of a long list of Jewish sports and athletic associations and clubs. In late August of 1898, Max Nordau stood at the podium of the Zionist Congress and called for the promotion of ‘Muscular Judaism’ (Muskeljudentum), an idea which envisioned the creation of a ‘new Jew’, typified by physical strength, which was, in his opinion, necessary in order to achieve the national revival of the Jewish people. Sometime later, at the end of October of that year, 48 young Zionists gathered in Berlin and founded an athletics club in the city, a true realization of Nordau’s ideas. They named the club ‘Bar Kochba’, after the legendary Jewish hero who led a revolt against Roman rule. During those years, Jewish clubs of the sort began to spring up like mushrooms after the rain. Most of them chose powerful Hebrew names like HaKoah (“The Force” or “The Strength”) and HaGibor (“The Hero”), or names of heroic figures from scripture such as Gideon and, of course, Maccabi (“Makkabi” in German).

Bar Kochba Berlin was originally established as a general athletics club, as was common in those days in Germany. It was the first of its kind – that is, the first Jewish athletics club in Germany. It was likely a reaction to, or perhaps a reflection of, the general development of athletic culture in Germany during those years. This was also the context for Nordau’s ideas; the Zionist leader didn’t necessarily picture 22 people chasing a ball when he spoke at the Congress in 1898. Only later did the club expand by opening individual departments dedicated to boxing, swimming, tennis, gymnastics – and football.

Most of the Bar Kochba Association’s successes were in gymnastics, while the football team generally took a backseat to the various other departments. The impressive achievements in gymnastics and boxing reinforced a Jewish sense of pride by showing that Jews were not inferior to their German neighbors. Jewish sports fans especially enjoyed watching the athletes proudly wear the light blue Star of David on their uniforms.

The Bar Kochba association soon became much more than a sports club. Its Zionistic activity grew, and the association published a periodical as well as a Zionist songbook. Young members of the association even formed the core of a Jewish defense force that helped protect the Jewish quarter in Berlin where Jews were harassed during and after WWI.

Sometime after the establishment of Bar Kochba, a HaKoah club was founded in Berlin, which shared its name with clubs in Vienna and other European cities. HaKoah Berlin focused mainly on football. Interestingly, a number of German refugees who had immigrated to Mandatory Palestine following the Nazi rise to power played under the Hakoah Berlin name as well.

In 1929, Bar Kochba and Hakoah merged to form a single Jewish Berlin club which was known from that point on primarily as Bar Kochba-HaKoah. The football team competed mainly in Berlin’s local leagues, up until 1933. In that year, the new Nazi regime moved quickly to cripple Jewish participation in sports. Jewish players were banned from all-German teams, and, having no other choice, joined the Jewish teams, Bar Kochba among them. Jewish football teams were forbidden from competing in national competitions resulting in the formation of separate Makkabi football leagues, which consisted of Jewish teams from all over Germany. Bar Kochba-HaKoah was notably successful under the new arrangement, winning a championship in its first year of competition. This feat was repeated three more times in later years.

In 1937, with the isolation of Jewish teams in Germany at its peak, the Bar Kochba-HaKoah football team went on tour to Israel. The visit was barely covered by the local Hebrew press and the Jewish press in Germany paid only scant attention. Nevertheless, the team’s players were to play approximately four matches in six days, and, in between games, attend numerous receptions and ceremonies held in their honor. The results were hardly impressive: Bar Kochba-Hakoah managed only two wins, two more games ended in draws while three matches resulted in defeat. Being cut off from proper competition in Germany had taken its toll.

About a year and a half later, following the organized violence of Kristallnacht, all Jewish sports clubs in Germany, including Bar Kochba-Hakoah, were officially shut down.

And yet, this was not the end of the road for Germany’s first Jewish sports association. German immigrants and survivors reestablished the Bar Kochba-HaKoah community here in Israel, celebrating its anniversaries and issuing a newspaper sponsored by the association. Meanwhile, Jews who returned to Germany sought to reestablish their beloved clubs, resulting in the formation of Makkabi Berlin in 1970, generally regarded as the successor organization to both Bar Kochba and Hakoah.

The new club was in fact formed as a merger of a number of sports departments bearing historic Jewish names: Bar Kochba Berlin in athletics, HaKoah Berlin in football and Makkabi Berlin in boxing. One of the organization’s former coaches was none other than Emmanuel Scheffer, manager of Israel’s legendary national football team that played in the World Cup. And so, even now, we find teams of men, women and children out on the grassy fields of Berlin, wearing blue uniforms and Stars of David on their chests. These days, the Makkabi Berlin men’s team is sitting comfortably in the top half of the city’s local Berlin-Liga. Makkabi Berlin also fields teams in basketball, volleyball, artistic gymnastics, swimming and even chess. The association can proudly boast around 500 active members, more than 120 years after a group of young Jews founded the first Jewish athletics association in Germany.

This article was written with the help of Yuval Rubovitch, Professor Moshe Zimmermann and Ronen Dorfan.