Why ‘Anti-Semitism’ Was Not in the Original Oxford English Dictionary

In a newly surfaced letter, the dictionary's founding editor wrote that it was not thought likely to be more than a "passing nonce-word…" 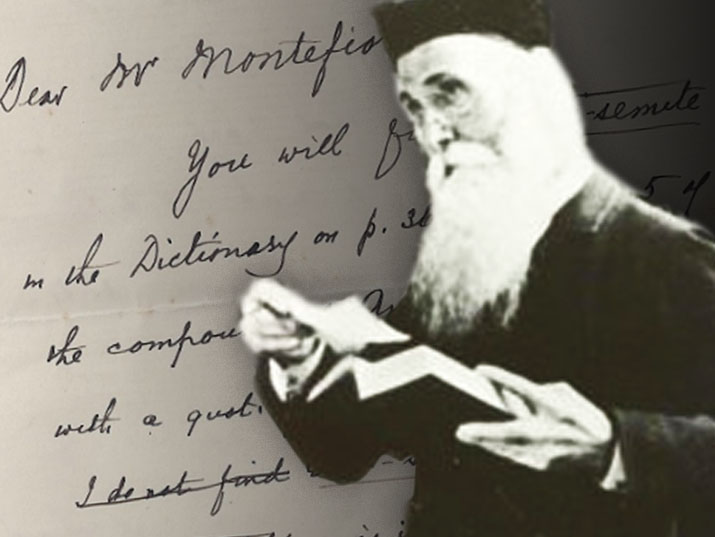 “Anti-Semitism” and related words do not have their own entries in the original edition of the Oxford English Dictionary, the massive project which sought to publish a comprehensive lexicon of the entire English language. Murray became the founding editor of the OED in 1879, with the full edition taking 40 years to publish.

The reasons for the word’s exclusion are elaborated by Murray in the letter, which he wrote on July 5, 1900 to Claude Montefiore, a scholar, ardent anti-Zionist and scion of the renowned British Jewish family. Montefiore was a founder of Liberal Anglo-Judaism, and the great-nephew of Moses Montefiore, one of the most important early supporters of the modern Zionist movement.

Besides the fact that “the material for anti- words was so enormous that much violence had to be employed” to get them all in, Murray noted the following:

“Anti-semite and its family were then probably very new in English use, and not thought likely to be more than passing nonce-words, & hence they did not receive treatment in a separate article. Probably if we had to do that post now, we should have to make Anti-semite a main word, and add ‘hence Anti-semitic, Anti-semitism.’

You will see that Anti-slavery, which was, then at least, a much more important word, is also treated among the Anti– combinations (sense 4). Would that Anti-semitism had had no more than a fleeting interest! The closing years of the 19th c. have shown, alas! that much of Christianity is only a temporary whitewash over brutal savagery. It is unutterably sadding to one like myself who remembers ’48 and the high hopes we had in the fifties that we had left ignorance, superstition[?], and brute force behind us, and that the 19th c. was to usher in the reign of righteousness. How the devil must have chuckled at our fond & foolish dream!” 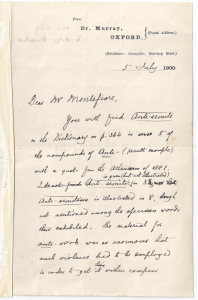 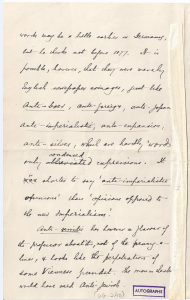 In a post-script, Murray also notes that according to his German assistant, a variety of “anti-” terms were “English newspaper coinages” – “hardly words” at all, but rather “condensed expressions”.  It was shorter to write “anti-imperialistic opinions”, for example “than ‘opinions opposed to the new imperialism’.”

Some prevalent “newspaper coinages” of this type at the time included “Anti-boer, anti-foreign, anti-Japan[?], anti-imperialistic, anti-expansion, anti-silver”. The term “Anti-semitic”, in his view, did not seem to fit into this category: “Anti-semitic has however a flavor of the professor about it, not of the penny-a-liner, & looks like the perpetration of some Viennese pundit. The man in the street would have said Anti-Jewish.”

The letter came to light as part of a major National Library of Israel initiative, supported by the Leir Foundation, to review and describe millions of items in NLI archival collections, which include personal papers, photographs, and documents from many of the 20th century’s most prominent cultural figures.

According to expert National Library archivist Rachel Misrati, who catalogued the letter as part of the initiative and has written extensively on NLI archival materials, “The Oxford University Press was unable to locate Montefiore’s original letter to Murray. Nonetheless, we can see from the context that Montefiore was apparently surprised by the fact that ‘anti-Semitism’ seemed to be conspicuously absent from the dictionary intended to be the English language’s definitive authority.”

Interestingly, the term “Semitism” did appear in the first edition of the dictionary, along with mention of the fact that “In recent use,” it had already come to be associated with “Jewish ideas or Jewish influence in policy and society”.

—
Special thanks to Rachel Misrati for her keen eye and expertise.


The Abraham Schwadron Autograph Collection has been reviewed and described thanks to the generous support of The Leir Foundation.

The Black Hebrew Exodus, 50 Years On