Coronavirus? We've seen it all before… A look at several plagues (both real and fictional) that were commemorated in literature over the years 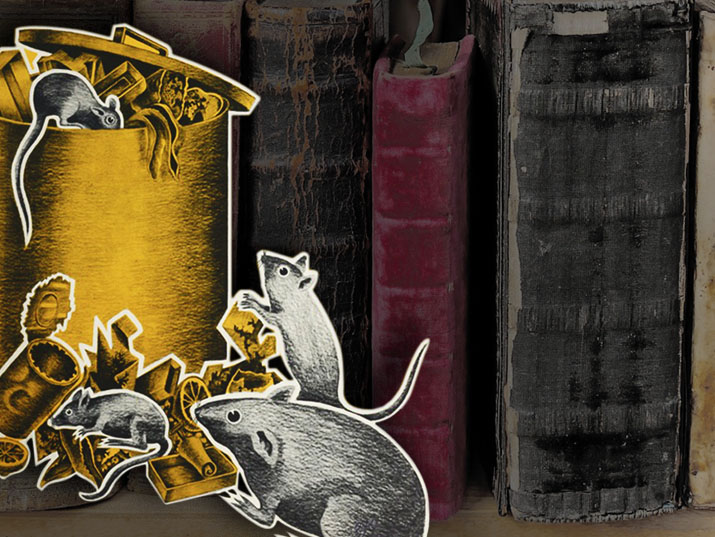 In these tumultuous days of corona, as we all endure the weighty rules of social distancing, allow me to recommend that you keep the four following books close by – at best they will provide comfort; at worst, they’ll remain sealed on your book shelf, because this article will tell you all you need to know (spoiler alert!).

Let’s start with The Pied Piper of Hamelin, a common folk tale which dates back to the Middle Ages, and which has been told and retold in many different versions. The story takes place in the year 1248, in the city of Hamelin, Germany, during the outbreak of a disease among the city’s rats.

Just when the residents of Hamelin despaired of their unsuccessful struggle against the pestilence, a mysterious piper appeared and offered to remove all the rats from the city for a fee. After facing the ridicule of the city’s residents, the city council approved the pact with the odd visitor. The piper took his pipe and started playing a tune as he strode along the streets of the city. As he played, the rats were lured out of their hiding places, to the great surprise of the locals.

When all the rats were gathered, the piper left the city and walked down to the Weser River. When he reached the water, he walked into it, while still playing his pipe. The rats followed him in and drowned. The city of Hamelin was saved from the rats, and the city council immediately declared a holiday and held a festive ball.

When the piper came to demand his fee, he was met with derision, and to his surprise, the locals even demanded that he be thrown out of the city. When the residents were exposed as ungrateful villains, the piper once again took up his pipe and began to play. This time, he played another magical tune – yet it wasn’t the rats that ran after him bewitched, but the children of the city! Once all the children had gathered around him, the piper made his way into a large mountain, from which no child ever returned. And so, the city of Hamelin lost all its children, as a result of the evil deeds of its people.

The story was rewritten again and again over the course of history; including by the Brothers Grimm. The moral of the story teaches us that the punishment of a corrupt, rotten society is annihilation – just like the biblical story of Noah’s Ark and the following literary plagues.

Unlike the previous story, the next book isn’t based on an actual historical plague.  However, just like the tale of the Pied Piper, it also makes use of the theme of disease to hint at a process of decay in society (and rats are again at the center of it all! Is someone trying to give us a hint…?)

The Plague is a novel by Albert Camus, a French Algerian author, and a Nobel laureate in Literature.

The novel is divided into five parts: in the first, we are told of an outbreak of plague in the city of Oran, in Algeria. The locals grow anxious as the city is filled with dying rats and before long people begin to succumb to the disease as well, at an ever-growing rate. Preventive measures are taken and a special department is opened in order to treat the patients and isolate them. Due to the sharp increase in the number of people infected and the lack of proper equipment to take care of them, the city is sealed off and a state of emergency is declared.

In the second part, all resources are severely limited and the city is completely cut off – communication with the outside world is impossible, apart from phone calls in cases of emergency. The narrator emphasizes the separation of family members, friends, and couples. The separation and lockdown affect daily activity in the city and crush the peoples’ spirit, despite their attempts to continue to behave normally.

The remainder of the book reads like the script of your typical post-apocalyptic thriller, as the atmosphere in the city descends into chaos, and attempts to revolt and escape are violently suppressed. Just as people begin to despair, the disease miraculously abates and the rats return to the city.

The book, perceived as an allegory of the maladies of human society, was published in 1947 after World War II. Some also consider it a metaphor for the French resistance to the Nazi occupation.

Blindness is a novel by the Portuguese author José Saramago, published in 1995.

The story begins with a driver who suddenly goes blind. However, this is no ordinary blindness – the only thing the driver sees before his eyes is the color white! A passerby volunteers to bring the driver home, but exploits his blindness and steals his vehicle. The blind man contacts an eye doctor, who is unable to find anything wrong with his eyes.

Gradually, the blindness becomes contagious, spreading from person to person: when a blind person looks at someone, that person also becomes blind. This is how the car thief is afflicted with blindness, the people in the doctor’s waiting room, and the doctor himself. The only person who remains immune to the blindness is the doctor’s wife. As the epidemic of blindness continues to spread, the authorities declare a state of emergency, placing all the blind people in isolation in an abandoned psychiatric hospital, in order to prevent the spreading of the blindness, which becomes known as “the white sickness.”

The patients suffer hardships until they manage to escape the asylum and return to the city. There, they discover that all of the city’s residents have gone blind and that chaos rules. The group tries to establish a measure of structure and order in what has become a lawless world, and is confronted with the difficulties of this strange new life and the necessity to search for food and water (and, I assume, toilet paper, as well).

At the end of the book, the blindness is lifted, and all the residents of the city get their sight back in the same order in which they were infected – starting with Patient Zero and so on. The cause of the strange blindness isn’t explained in the book, and remains a mystery.

And now, an abrupt transition, from the white plague to the black plague, in a literary masterpiece which narrates a fictional plot against a backdrop of historical reality. Here, too, we see an attempt to preserve normal social order amidst instability and social disintegration, in Giovanni Boccaccio’s great work – The Decameron.

Boccaccio wrote The Decameron in the 14th century, as the bubonic plague (“The Black Death”) ravaged Florence.  In his story, ten young noble Florentines flee from the plague to an unaffected rural area. Quarantined with their servants in a luxurious villa, they spend ten days telling each other stories. We won’t dwell on these fascinating tales, but rather on the introduction describing the situation in the city during the epidemic.

Instead of explaining and expanding, I’ll just let the text speak for itself.

“Thirteen hundred and forty-eight years had passed since the fruitful Incarnation of the Son of God, when there came into the noble city of Florence, the most beautiful of all Italian cities, a deadly pestilence, which… several years earlier had originated in the Orient, where it destroyed countless lives, scarcely resting in one place before it moved to the next, and turning westward its strength grew monstrously. No human wisdom or foresight had any value: enormous amounts of refuse and manure were removed from the city by appointed officials, the sick were barred from entering the city, and many instructions were given to preserve health… at the beginning of the spring of that year, that horrible plague began with its dolorous effects in a most awe-inspiring manner, as I will tell you.

…But what gave this pestilence particularly severe force was that whenever the diseased mixed with healthy people, like a fire through dry grass or oil it would rush upon the healthy. And this wasn’t the worst of the evil: for not only did it infect healthy persons who conversed or mixed with the sick, but also touching bread or any other object which had been handled or worn by the sick would transport the sickness from the victim to the one touching the object.

…Because of all these things, and many others that were similar or even worse, diverse fears and imaginings were born in those left alive, and all of them took recourse to the most cruel precaution: to avoid and run away from the sick and their things; by doing this, each person believed they could preserve their health.”

It’s true that the social distancing that’s been forced upon us isn’t easy to cope with, but let’s stay optimistic (and adhere to the rules), and remember that things are gradually getting better (and warmer). Let’s hope we get a few good books out of this pandemic too!