With his son still on the front lines, philosopher Samuel Hugo Bergmann wrote about how the news of victory over the Nazis was received in Jerusalem 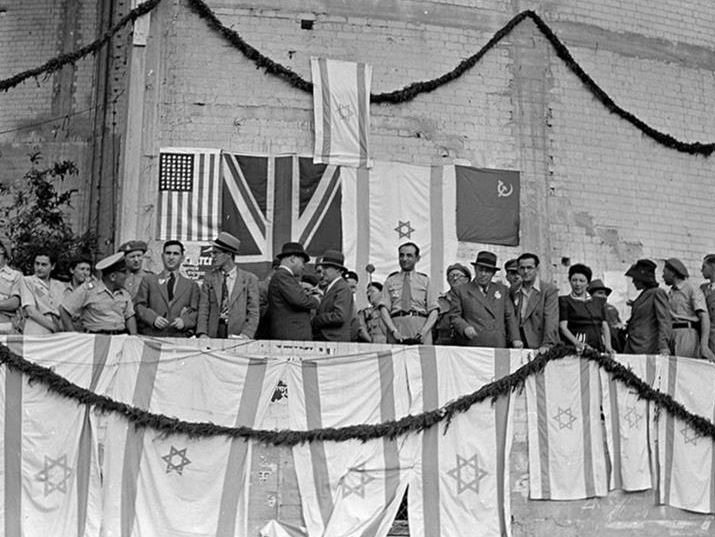 May 2nd: This morning, the news came of Hitler’s death, which passed without making much of an impression, for a number of reasons: because people don’t believe it, or because they were prepared for it, or because, after all that has transpired and still lingers like poison in the soul, the death of the one who was chiefly responsible is no longer significant. There is no joy in the air during this hour of victory, just as there was no excitement at the beginning of the war […]

After five years and eight months, with the unconditional surrender of the Germans on the 8th of May, 1945, World War II came to an end in Europe. It had been the most destructive and cruelest war in human history, involving more than 60 nations and some 110 million soldiers, and it is estimated to have exacted approximately 60 million victims, including six million Jews, the victims of the Holocaust. Vast territories, entire cities and villages across Europe were left in ruins, and millions of people lost their homes.

Stories from the war and its history became the basis of an unfathomable number of literary and cinematic works, as well as scholarly and philosophical studies. Such stories continue to serve the same function today. It goes without saying that an event of this magnitude remained etched in the memories of millions, occupying subsequent generations born years after the war was over.

May 5th: Two letters from Uri [one of Bergmann’s sons], in which he reports on his meeting with German prisoners. They are human beings like everyone else. May he give one of them a knife to open a can of sardines? Should he give him cigarettes? He wrote about the Jewish soldiers who continued fighting to the end, so that they would not be forced to become prisoners, and asked for my opinion about it. Yesterday I wrote to him. – What times these are! Yesterday I heard a story on the radio about the surrender of the Germans in Holland, Denmark, and northwest Germany. Afterwards, they broadcast the verse from Psalms 126: “We were like dreamers[…]

In European countries, the 8th of May has a special significance, since on that day in 1945, the German Instrument of Surrender to end the war entered into effect. A day earlier, General Alfred Jodl, Chief of the Operations Staff of the German Armed Forces High Command had signed it. The surrender ceremony at which the document was signed in the presence of the Western Allies took place on the 7th of May, in the French city of Reims. A similar ceremony took place in the presence of Red Army generals of the Soviet Union in Berlin, on May 9th.

The war had barely reached Mandatory Palestine and its residents, with the exception of the Italian bombing of Tel Aviv in 1940. A greater danger was the presence of large German units in North Africa under the command of General Erwin Rommel, but his defeat in November 1942 at El Alamein put an end to the danger of the conquest of Palestine by the Nazis.

May 6th: […] When [Yitzchak Ernst] Nebenzahl told me that he had heard on the radio that they would declare Victory Day within a day or two, I used the opportunity to tell him about the pessimism that gripped us, obviating any joy like that in Fichman’s article in “Davar” and in prayer 126 [the verse from Psalms]

Despite this situation, many residents of Mandatory Palestine were involved in the war in one way or another: as refugees from Europe, as soldiers in the Jewish Brigade (a unit in the British Army) or as relatives of European Jews who fell prey to the cruel deeds of the Germans in the framework of the Final Solution and the methodical extermination plan.

The archives of the National Library of Israel contain material that reflects the historical moment of the war’s end and the German surrender. One fascinating example is the diary of philosopher Samuel Hugo Bergmann.

Bergmann (1883-1975), a native of Prague, immigrated to Palestine in 1920. For 15 years he served as the director of the Jewish National and University Library, today’s National Library of Israel. From 1935 he served as a professor of philosophy at the Hebrew University of Jerusalem.

Like many of his generation, Bergmann kept a diary in which he documented personal issues, but also referenced political developments and general matters. Bergmann wrote his diary entries in German, but used a shorthand method, widely used at the time among speakers of German and other languages. The use of shorthand enabled very quick writing, but it has become something of a secret code, as today we are barely able to decipher it. Luckily, Samuel Hugo Bergmann’s widow, Else, together with a number of other individuals, deciphered his journals and copied the texts into ordinary German.

A selection from the diaries was published in Germany in 1985. The original diaries are located, together with other writings and documents, in the Samuel Hugo Bergmann Archive in the Archives Department of the National Library of Israel.

May 8th and 9th: Two days of peace celebrations. On May 7th in the morning, a lecture by Sir Ronald Davidson on problems in England following the war. On the way, I heard that Germany had surrendered. In the evening, at [David Werner] Senator’s home, during the meeting at 9.30 we learned that the surrender talks had concluded and that they had declared Days of Peace on May 8th and 9th. That same evening, I went with [Else] to Zion [Square], where we saw only drunken soldiers […]

The Samuel Hugo Bergmann Archive has been reviewed and described thanks to the generous support of The Leir Foundation.