The Student Demonstration against the Nazis and against Anti-Semitism, Munich, 1960

Home > Germany the Jews and Israel > The Student Demonstration against the Nazis and against Anti-Semitism, Munich, 1960
Diaspora

"It is impossible to define anti-Semitic activity as a prank. It is directed not only against the Jewish citizens who live with us, but against the basic rights of our country. What is called for is not punishment, but education!" 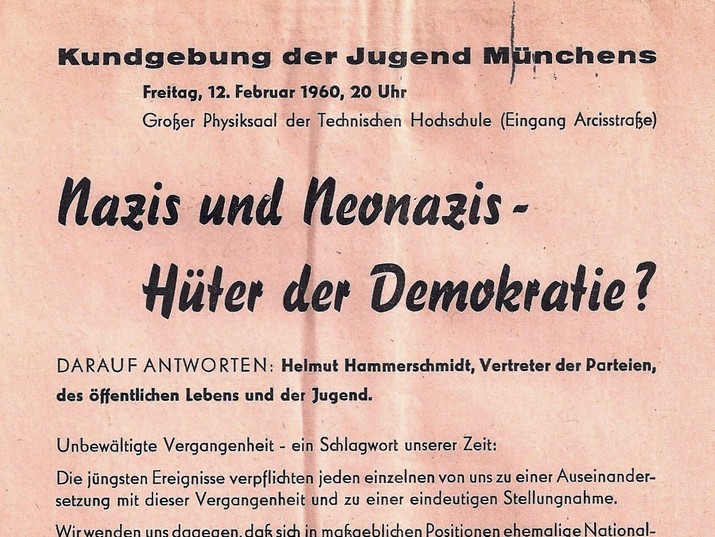 On Christmas Eve, 1959, two young, 25-year-old German men scrawled an anti-Semitic slogan and swastikas on the synagogue in the city of Cologne in West Germany, as well as on a monument in memory of the victims of the Nazi regime. Local citizens took note of the deed and called the police. A few days later, the police caught the vandals, who were members of a small extreme right-wing party known as “The German Reich Party.” Although most German citizens were to a certain extent still accustomed to such slogans and to the sight of a desecrated synagogue, the act captured public attention and resonated strongly. Ministers condemned it on the radio, and the still fledgling television stations broadcast special repots about the incident and the progress of the police investigation. The Israeli press also reported the incident, such as the December 27, 1959 article appearing in Davar. On one hand, desecration of the synagogue actually encouraged the occurrence of similar incidents around West Germany, and yet, on the other hand, it also spurred a wave of anti-Fascist demonstrations and public events in which discussions of the incidents were held.

One of the public discussions took place in the city of Munich in February 1960. Residents of the trainee and student dormitories at Massmannplatz, part of a democratic group of young people, called for a meeting in one of the halls of the Technical University for a public discussion about the new-old wave of anti-Semitism and about the necessity of grappling with the Nazi past of Germany and its people. One the speakers at the Munich event was Helmut Hammerschmidt, the Assistant Chief Editor of the Bavarian Broadcasting Authority, whose Jewish father had been murdered during the Nazi period. The organizers of the event, residents of the dormitories, issued a special edition of the organization’s newspaper, which featured reporting on the event – which took place precisely during Carnival, a coincidence of dates which was one of the reasons for the relatively small number of participants. A number of the speeches from the evening in Munich were printed in the newspaper, a copy of which was sent to Israel.

Paradoxically, the anti-Semitic act of the two extremists in the city of Cologne ultimately yielded a positive result: following the desecration of the synagogue, official and unofficial individuals and organizations criticized and condemned German society, and even the German government, which was forced to take concrete steps to initiate a public discussion of Germany’s past up to 1945. One minister in the East German government, who had a very active Nazi past, was forced to resign. Following the event, Chancellor Adenauer visited a former concentration camp for the first time, and participated in a ceremony in memory of its Jewish victims. The Germania Judaica Library in the city of Cologne, established in 1959 on the initiative of the author Heinrich Böll, which focuses on the history of Germany’s Jews, has since developed, and today is presently the most important library of its kind in Germany. A few universities in West Germany established institutes of Jewish studies (Berlin, Frankfurt, Cologne, Freiburg) and in 1963, 25 years after the Kristallnacht pogroms, a large exhibition opened on the history of Germany Jewry, drawing more than 100,0000 visitors. In 1960, David Ben Gurion and Konrad Adenauer met for the first time, and shortly afterwards, student exchanges between the two countries began to take place. In 1965, the two countries also established diplomatic relations. 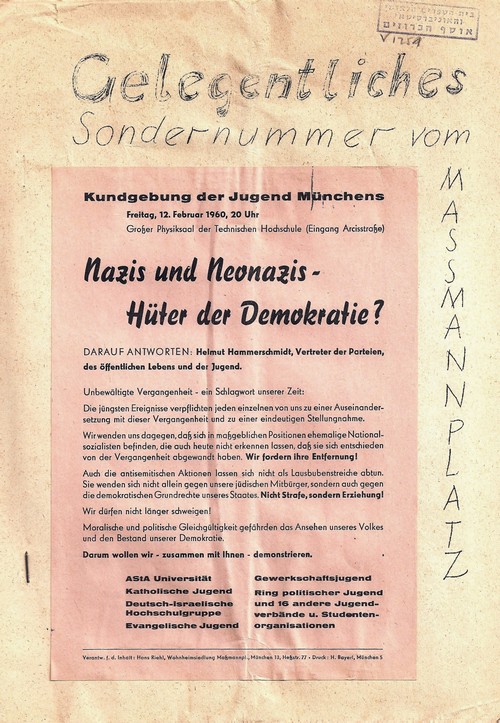 Translation of the announcement:

Nazis and Neo-Nazis – Preservers of the Democracy?

Panel Participants: Helmut Hammerschmidt and Representatives of the Community and the Youth

The Past We Haven’t Dealt With – A Motto for our Time.

The recent events require every one of us to grapple with the past and take an unequivocal stand.

We protest the fact that former Nazis who have no reservations about the past occupy key positions. We demand their resignation.

It is impossible to define anti-Semitic activity as a prank. It is directed not only against the Jewish citizens who live with us, but against the basic rights of our country. What is called for is not punishment, but education!

We must no longer remain silent!

Ethical and political apathy endanger the good name of our people and the existence of our democracy.

Therefore, we all want to demonstrate with them

The Youth of the Professional Guilds

The Political Youth Organization, and 16 other youth and student organization