Who was Curt Wormann? What was he doing in Germany just ten years after the end of the war? And who was Felix Weltsch? 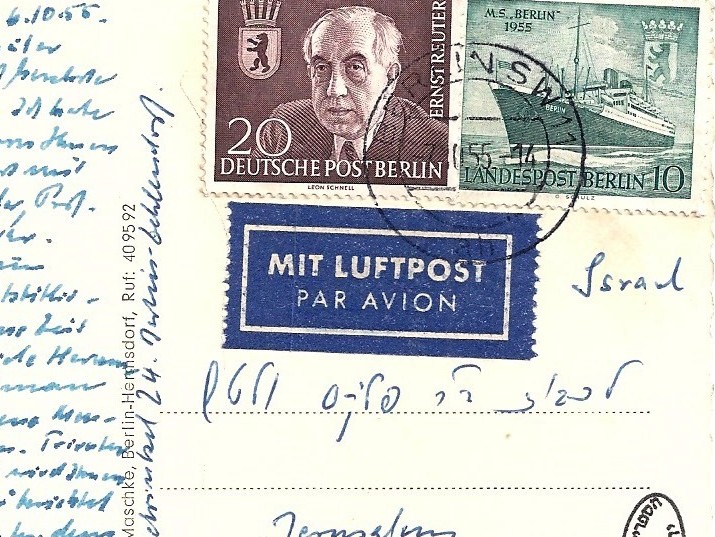 When Curt Wormann wrote this postcard in Berlin to Felix Weltsch in Jerusalem, it was not simply an inquiry from one man to his colleague. Actually, the director of an important institution in Israel was writing to one of his senior employees – from Germany. Who was Curt Wormann? What was he doing in Germany just ten years after the end of the war? And who was Felix Weltsch?

Curt David Wormann was born in Berlin in 1900, studied literature at university, joined the German Social-Democratic Party, and worked as a librarian at the public library of Berlin-Kreuzberg, of which he was also the director until 1933. In the spring of that same year, Wormann received a letter of termination from the municipal services in Berlin, which had begun within a short time to operate according to Nazi directives. Wormann, as it turned out, was fired for two reasons: he was Jewish, and he was a Social-Democrat. A year later, he moved to Israel, and in 1937, he was again working as a librarian, this time at the Tel Aviv municipal library, under the directorship of Heinrich Loewe. But this was not the final stop in Curt Wormann’s career. In 1947 he received his last appointment – as the head librarian of the National and University Library in Jerusalem (now the National Library). He began his work in this institution under less than simple circumstances that grew more complex with the partitioning of Jerusalem in 1948, when the library building was on Mount Scopus, cut off from the western part of the city. And indeed, thanks to Wormann, the library survived, grew over the years in terms of both the number of holdings and the staff, and even received a new building at the recently established campus of the Hebrew University in Givat Ram. The building, inaugurated in 1960, is used by the National Library to this day. In parallel to his work as head librarian, Wormann also established and headed the School of Library and Archive Studies at the Hebrew University.

Felix Weltsch, to whom the postcard is addressed, was born in Prague in 1887. In his city of birth he studied law and philosophy and received doctorates in both disciplines. Already in 1910 he was working as a librarian at the German University in Prague. He was acquainted with Franz Kafka from his legal studies. The great author was one of Weltsch’s closest friends. Together with Max Brod and the sightless author Oskar Baum, they were the famous “Prague circle,” active in the fields of literature and philosophy. From 1919 and until his last days in the spring of 1939, Felix Weltsch was also the chief editor of the Zionist newspaper published in Bohemia, Selbstwehr (“self-defense”). With the German invasion of Czechoslovakia in 1939, Felix Weltsch fled to Palestine/Eretz Israel with his family and with Max Brod, where he took up residence in Jerusalem, and shortly thereafter, joined the staff of the National and University Library. Due to his vast experience as a librarian, Weltsch was made responsible for the library’s classification system, and even taught at the School of Library Studies. At the same time, he wrote articles in philosophy and literature, including on Franz Kafka and his works. Weltsch wrote mainly in German, but his writings have been translated into Hebrew and other languages.

In the postcard to Weltsch, Curt Wormann writes about the meetings he had in Germany, for example with the publisher Peter Suhrkamp, with his colleague Lambert Schneider, and also with Hans Wilhelm Eppelsheimer, the first director of the National Library (Deutschen Bibliothek) of West Germany, located in Frankfurt. At one point, Wormann even visited the National Library in East Berlin, formerly the National Library of Prussia. It is reasonable to assume that Wormann knew the librarians from before when he worked in Berlin. It is also known that Wormann went to great lengths to save Jewish books confiscated by the Nazis. It is therefore likely that these were the reasons that brought the director of the library in Jerusalem to Communist East Germany in 1955, during a period when there were no official ties between the State of Israel and East Germany.

The choice of the German language for writing the postcard is not surprising: it was the mother tongue of both Wormann and Weltsch, and the two felt comfortable in it. Only the address is written in Hebrew, in order to make things easier for the employees of the Israeli postal system. 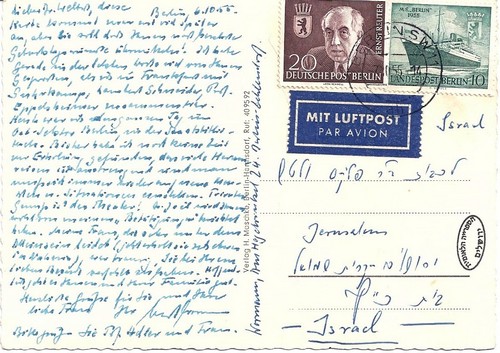