"The Germans must not forget what was done during these shameful years. […] Nobody, absolutely no one, will relieve us from that shame."

Fifty years ago, on May 5, 1960, former German President, Professor Theodor Heuss, landed in Israel. Although Heuss was one of thousands of tourists who visited the country that year, his visit was classified top-secret, and his coming to Israel aroused much excitement. What was so special about Heuss that distinguished him from the other post- World War II German statesmen, and what was the secret of his charm, that caused many members of the Israeli public, who still had reservations regarding the new relationship with the “other Germany”, to receive him so warmly?

Theodor Heuss, son of an engineer, was born in 1884 in the state of Württemberg, Germany. He studied political philosophy at Munich and Berlin Universities, and already as a student became deeply involved in political activity. His unequivocal positions, as representative of the German Democratic Party, negated the policy expressed by the National-Socialist Party during the last days of the Weimar Republic. Among the political writings that Heuss published at the time, two of them are of particular note, as they were directed against Hitler. Later, these books were condemned to be burned and Heuss was publicly denounced. During the period of Nazi rule in Germany, Heuss was forbidden from participating in any political or journalistic activity, and he devoted himself to academic work, writing biographies, as well as a comprehensive history of the German of 1848. When publishing articles in the newspapers, he was always sure to use a pen name.

Heuss’s great moment as a statesman came after World War II. In 1948, after he failed in his attempts to establish a pan-German liberal party, he was elected to the position of Chairman of the Free Democratic Party. His respectable character, mild personality and broad education won him the sympathies of many people in the nascent West German Republic. As one of the formulators of the German constitution, Heuss contributed greatly to shaping the face of his country, forced to arise from the ruins and deal with its difficult past. In 1949, and again in 1954, Heuss was elected to the German presidency, and was the first president of the West German Republic. During his two periods of office, Heuess won the respect and affection of many members of the German people.

​In his great wisdom, Heuss understood that an inseparable part of the reconstruction of Germany and its reacceptance into the world of nations depended on its ability to courageously confront its Nazi past. Felix Shinar, Israel’s first ambassador to Germany, wrote in his memoirs that Heuss “expressed the idea of Germany’s inconsolable disgrace in coining the concept of the German people’s ‘collective shame’ about what happened.” In the dedication of the headstone in memory of the victims of the Bergen-Belsen Concentration Camp in 1952, Heuss said: “The Germans must not forget what was done during these shameful years. […] Nobody, absolutely no one, will relieve us from that shame.”

Heuss’s courageous attitude regarding the days of the Third Reich earned him the faith of many people, including in Israel, and helped facilitate the thawing of relations with the state, the echo of whose crimes against humanity had not yet subsided. Heuss’s personality therefore helped to bring about the recognition of a “different,” enlightened Germany, a country and culture that many Israeli citizens continued to secretly admire, wishing for the quick opening of a new page in the relations between the two peoples. It is therefore not surprising that Heuss was very warmly received by the Israeli academic elite, many of whose members were German-born. Heuss, the man of letters and culture, understood that a renewed rapprochement between the Jewish and German peoples would not arise merely from financial contracts and diplomatic ceremonies. The building blocks of the relations between Israel and Germany, he believed, would be an open and sincere exchange of view between intellectuals, artists and philosophers from both sides. His visit to Jerusalem, therefore, was one of the heights of a series of meaningful meetings and reciprocal visits, in which ideas in the realms of intellect and culture were exchanged.

Martin Buber, Gershom Scholem, Akiva Ernst Simon and Samuel Hugo Bergman were Heuss’s official hosts at The Hebrew University, and they delivered moving welcoming addresses at the conference held in his honor on the Givat Ram Campus, at which Heuss spoke about the shaping of democracy. The next morning, the daily newspaper Maariv reported that “There are 750 seats at the Wise Auditorium at The Hebrew University. Over 1,000 people attended, and many remained outside.”

The visit to The Hebrew University brought the 76-year-old Heuss great pleasure, apparently since it was the only event during his long tour of Israel in which the Holocaust was not mentioned explicitly and no questions on the matter were posed to him. During the period when citizens of Israel were waiting for the commencement of Adolf Eichmann’s trial, just a few weeks after his arrival in Israel became public knowledge, the topic of Holocaust crimes was a sensitive and oft-discussed matter. One cannot deny that during this historic visit, among the Israeli populace there were many who vehemently criticized the warm reception that the representative of the German people, the “murderous nation” received. 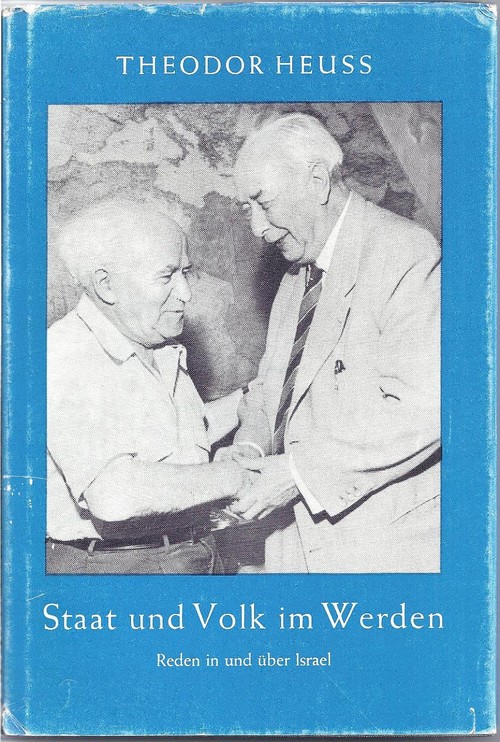 H​euss, who reported carrying a small notepad with him at all times, in which he drew and expressed his impressions in brushstrokes, shortly after his visit to Israel published a book with statements he delivered in Israel, and words spoken in his honor at The Hebrew University. The text in this book was interspersed with delicate brush drawings of Israeli landscapes that made an impression on him. In August 1960, just two months after his return to Germany, he sent Martin Buber a copy of this book, with a warm dedication. During his visit to Jerusalem, Heuss had made a personal gesture to Buber, visiting him at his home on Hovevei Tzion Street.

The meeting with the heads of the Hebrew University of Jerusalem also included a visit to the National Library, which was at the time a university institution. The National and University Library, as it was called then, was poised before an historic transition from its temporary residence in the Terra Santa building to the new building on the Givat Ram Campus. In photographs documenting that visit, Heuss can be seen, a plump cigar protruding from his mouth, inspecting with great interest ancient manuscripts of machzorim from Ashkenaz that were brought to him by then director of the library, Dr. Kurt Wahrman and his vice director, Dr. Yissachar Yoel, both native Germans. Heuss remembered Wahrman from the period when he had been chief librarian of the Berlin-Kreuzberg public library system, during the Weimar Republic.

This important visit, although it took place only at the end of Heuss’s tenure as president of West Germany, was, in the words of Felix Shinar, an important link in fortifying the decisive role that intellectual, scientific and cultural matters have – as eternal values – in solidifying the relations between the two nations