During those years, an underground organization of activists from the radical German left was established, which operated against the West German government by carrying out a long series of terrorist acts, kidnappings, hijackings and robberies 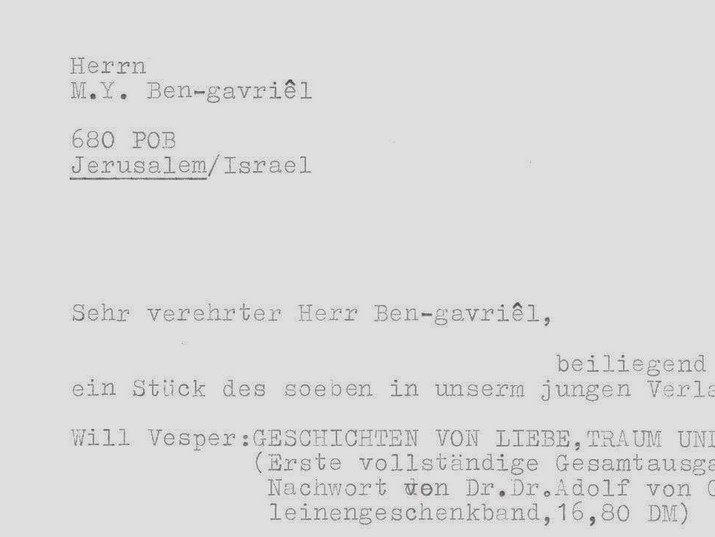 In October 1963, Israeli author Moshe Yaakov Ben Gavriel received a letter from the German publisher Bertl Petrei of Stuttgart. It was not unusual for Ben Gavriel, who at the time was very popular among the German-reading audience, to be contacted by German publishers. However, the content of the letter was a great surprise for Ben Gavriel. The German publisher was requesting him to write about the works of German author and poet Will Vesper (1882-1962), who was a Nazi sympathizer and had devoted himself unequivocally to the Nazi cause from 1933-1945. For example, Vesper delivered a speech during the book burning in Dresden in the spring of 1933. Vesper incited the public against Jews and mainly against Jewish authors who wrote in the German language. In light of this, the Austrian-German publisher’s request of Ben Gavriel to write a review of an anthology of the Nazi author’s novellas was problematic, to say the least.

Ben Gavriel immediately understood the magnitude of the problem and replied that the request left him with a bad feeling, and that he was unable to write about the works of a Nazi author. According to the wording of the response (a copy of which exists in Ben Gavriel’s archive), together with the letter, he also returned the book to the sender, publisher Bertl Petrei.

And behold, a number of days later, an additional letter arrived from the publisher, longer this time, which attempted to calm the Jewish author in Jerusalem and to justify the request as well as defend the standing of Will Vesper in German literature. And yet the person who wrote the letter did not address all to the problematic biographical details of the author’s life, which did not speak in his favor, certainly given the atmosphere prevailing in 1963, when it was impossible to ignore the Nazi past of a prominent cultural figure. The two letters from the publisher to Ben Gavriel are signed by different people. The first was signed by Gudrun Ensslin, and the second, by S. Mauer. We do not know anything regarding the identity of the second signer, but the name of Gudrun Ensslin is certainly known, in an entirely different context, linked to events that took place in Germany from 1968-1993.

During those years, an underground organization of activists from the radical German left was established, which operated against the West German government by carrying out a long series of terrorist acts, kidnappings, hijackings and robberies. What the author Yaakov Moshe Ben Gavriel could not have known, and given that he died in 1965 never learned, was that Gudrun Ensslin, who signed the first letter he received from the publisher, went on to become a senior figure in a left-wing terrorist organization known as The Red Army Faction (Rote Armee Fraktion – RAF). This organization set West German society into a storm mainly in the 1970s and divided the population between opponents and supporters of the movement, which according to its declarations was fighting the capitalist-imperialist regime through “urban guerilla warfare.” To this end, members of the underground, among them, Gudrun Ensslin, even spent time at a PLO training camp in Jordan. The peak of the organization’s activity – which was also the peak of the severe social crisis in West Germany – was in the fall of 1977, when Palestinian terrorists hijacked a German airplane, and in exchange for releasing the passengers, demanded the release of the RAF leadership, which had been in prison since 1972, among them Andreas Baader, Ulrike Meinhof and Gudrun Ensslin. Following the failed hijacking of the German plane – all of the passengers were released – a number of the upper echelon committed suicide in prison in October 1977, Gudrun Ensslin among them. Supporters of the underground were skeptical that the cause of death was suicide, and in their eyes, those who died were martyrs. The underground continued its activities for several more years, and finally dissolved only in the early 1990s.

However, in 1963, all of these events were still a future that had not yet come to pass, that is, when Gudrun Ensslin wrote to Moshe Yaakov Ben Gavriel on behalf of the publisher of the author Will Vesper. The question arises as to why Ensslin collaborated with a commercial publisher on this matter; a few years later she acted determinedly against every “capitalist-imperialist-fascist” entity. Studies of Ensslin’s life have shown that at the time, she was involved in a relationship with Vesper’s son, Bernward Vesper. The author’s son tried to grapple with the spiritual legacy of his father, and to this end, promoted the re-publication of his works, in part with the help of Ensslin, who later became a prominent terrorist. The request of Vesper and Ensslin to Ben Gavriel, as well as the wording of the letters, suggest no small degree of political confusion. The confusion characterized a large portion of the supporters of the radical left, mainly in their attitude towards Jews and Israel, a phenomenon which is common among the German Left to this day.