​Buber’s winning the prize made many waves in the German media, and it can be assumed that the event was a paving stone in the path to the establishment of official relations between West Germany and Israel 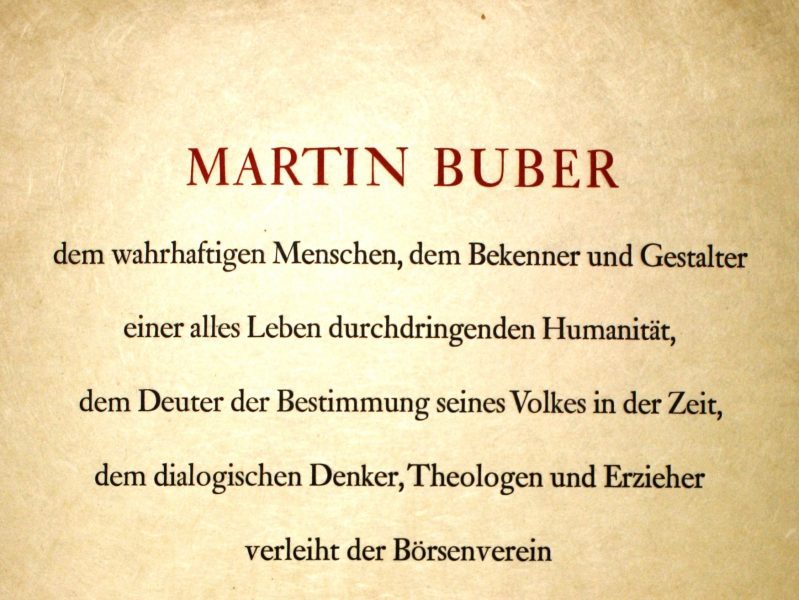 From 1950, the German Booksellers Association began awarding a peace prize to well-known individuals in the disciplines of science, literature and art, who exhibited outstanding activity on behalf of peace. For many years, the prestigious prize was granted at the Frankfurt Book Fair, the largest international fair of its kind – held in mid-October. The awards ceremony takes place in the building of St. Paul’s Church in Frankfurt, where the first democratic German parliament convened in the mid-19th century. The ceremony receives much attention from the public and the media. While it is a Germany prize, the recipients hail from around the world. The list of winners already includes 65 names, including Albert Schweitzer, Hermann Hesse, Karl Jaspers, Max Frisch, Astrid Lindgren, Yehudi Menuhin, Teddy Kollek, Amos Oz, David Grossman and others. And yet the first Jew – and Israeli – to receive it was Martin Buber (1878-1965), who received the prize already in October 1953, just eight years after the end of World War II and the Holocaust. What led the Israeli philosopher to accept the prize, even though he was forced to leave Germany in 1938 following the racist Nazi persecutions?

Relatively soon after the Second World War ended, Buber began his extensive travels to European countries, but also to the United States, in order to participate in conferences and give lectures in varied forums. However, until 1951, the philosopher took care not to set foot on German soil, even though he had also been invited to speak in the Western part of this country. Only the repeated and insistent requests of Protestant theologian Karl Heinrich Rengstorf succeeded in convincing Buber to give a private lecture to a small and select audience in the apartment of the German scholar in the city of Münster. Buber met people there who listened to him respectfully, “people who have a face,” as Buber called them, since Buber was unable to identify a human face among most of the German people, who followed Hitler’s path. It seems that this encounter illustrated for Buber that a “new Germany” may, indeed, have come into existence. In that same year, 1951, Buber was informed that he had received the Goethe Prize awarded by the city of Hamburg. However, among the Israeli public, many opposed Buber’s agreement to accept the prize. Among the opponents were those who claimed that it was too early to accept a humanistic prize from an official German organization. Ultimately, Buber went to Germany to accept the prize only in 1953. During this year, he won additional prizes and honorary degrees, including the Peace Prize of the German Book Trade.

The prize – which today is considered quite prestigious – was at the time just starting out: Buber was the fourth recipient. Those present at the ceremony in Frankfurt proved to what extent granting the prize to a Jewish philosopher was significant for the prize committee and for those involved in the matter: among the guests of honor was Theodor Huess, the first president of the Federal Republic of Germany. During the ceremony, four people spoke: Arthur Georgi, at the time Chairman of the German Booksellers Association, Frankfurt Mayor Walter Kolb, Albrecht Goes, Protestant theologian and author, who spoke in praise of the work of Martin Buber and its importance, and finally, the winner of the prize himself spoke. Buber’s speech was entitled “Genuine Dialogue and the Possibilities of Peace” (“Das echte Gespräch und die Möglichkeit des Friedens”). In his speech, he of course made reference to the dark memories of the days of the Holocaust, declaring: “And who am I to ‘forgive’!” At the same time, Buber called upon the nations to find ways to embark on a humanistic discourse, for the sake of peace and mutual understanding. In his speech at this auspicious occasion, Buber remained faithful to the philosophy of dialogue that he developed and promoted through many decades of academic and public activity.

​Buber’s winning the prize made many waves in the German media, and it can be assumed that the event was a paving stone in the path to the establishment of official relations between West Germany and Israel. In contrast, the media buzz in Israel was very restrained. Generally speaking, Buber was at the time much better known and accepted in the various European nations than in Israel, and it is reasonable to assume that there were still many who did not agree with his readiness as early as 1953 to accept the prize granted by an official German body. In contrast, acceptance of the honorable doctoral degree from the Hebrew University that same year was the first honor that Buber received in Israel, and his winning the Israel Prize in 1958 marked the acceptance of his views among an even broader population in his country.