Under the Watchful Eye of “Big Brother”

Relations between the Communist Parties in Israel and East Germany 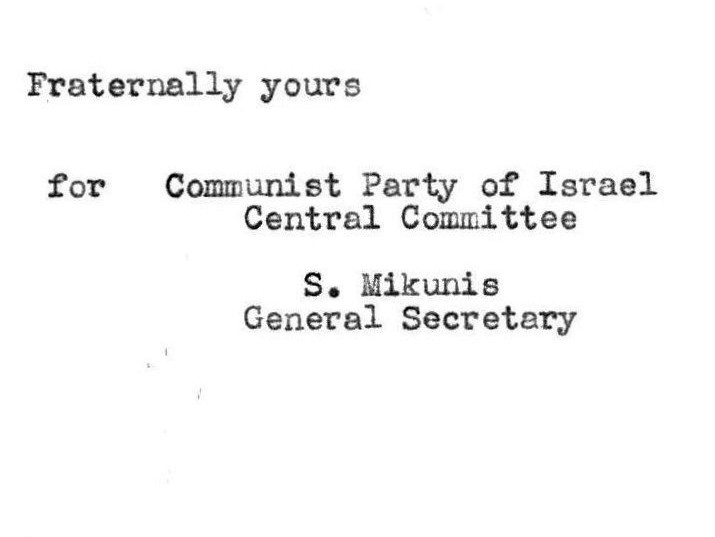 In contrast to the growing formal and informal ties that began to develop between Israel and the Federal German Republic already in the 1950s beginning with the reparations agreement, no ties developed between the eastern part of Germany and the Jewish state. Apparently, the disconnect did not stem from one side only: alongside East Germany’s obvious fear from contact with Israel, which in all likelihood would have led to demands for reparations (which, indeed, were submitted by the Israeli government, but remained unanswered), the Israeli leadership knew that any contact with the Communist German state would cause problems in the relationship with the Federal Republic. The West German government was at the time adhering to the Hallstein Doctrine, which prohibited official ties with East Germany and with any entities that recognized this country.

Despite the lack of connection between the two countries until 1990, ties were conducted between the ruling Socialist-Communist Party in East Germany, and the Communist Party in Israel (MaKI), and continued after MaKI split in June 1965 and one stream formed “The New Communist List” (RAKAH). In the party’s archives at the National Library, a number of letters were recently discovered that attest to ties between the parties, which viewed one another as comrades in the anti-imperialist struggle. The letters received from the leadership of the ruling East German government were written in German. Most of the letters from East Germany in the correspondence files bear the signature of party leader and East Germany head of state Walter Ulbricht.

The letters, from the 1960s and 70s, discuss the various topics: Most are greetings for party occasions marking independence celebrations for East Germany, and long abstracts about Soviet policy in the context of the Communist bloc in Central and Eastern Europe.

These letters were written formulaically in a manner characteristic of the Communist Party, lauding the Soviet ideological position and condemning the deeds of the imperialist West. The very fact that Walter Ulbricht’s signature appears on most of the letters shows the importance he attributed to these announcements to the communists in Israel. It should be noted that this was the most heated period of the Cold War, when the world was at the brink of a nuclear war between the super powers. At this time, the division of Germany was also completed, with the construction of the Berlin Wall in 1961. The Communist leadership in East Berlin understandably was using every means to close itself off from the capitalist enemy.

Other matters discussed in the correspondence between the two parties were the verification of personal data regarding communists who moved from Israel to East Germany or vice-versa, a request for a supply of ideological textbooks from East Germany to Israel, and even the request for a printing press for the publication of newspapers in the Arabic language.

In April 1960, members of the Israeli party contacted its German sister party regarding the possibility of sending five “progressive” students” to East Germany for study. As secretary of the Socialist Unity Party, Walter Ulbricht responded favorably to this request and agreed to accept five students to universities and colleges in his country, on condition that their mastery of the German language was satisfactory. He added that this move should not be publicized at the time, since it did not suit the current political situation. The correspondence files contain several additional letters that relate to this, but it is not entirely clear whether the project was ultimately implemented. Of course, hosting Israeli students in any case in East Germany, and particularly in 1960, was an unconventional move. The fact that Ulbricht gave his personal approval, regarding a matter that under normal circumstances would not have reached the desk of the head of state, shows the importance that functionaries attributed to this move. And yet, the correspondence files of the Israel Communist Party (MaKI) show that party clerks during the same period also contacted other countries in the Communist bloc. It is likely that in these cases, matters developed with greater ease, since the State of Israel conducted official diplomatic ties with all of the Eastern European countries until the Six-Day War, with the exception of the German Democratic Republic.