Governments and Crises: Memories of Israel’s and Germany’s Ambassadors

Home > Germany the Jews and Israel > Governments and Crises: Memories of Israel’s and Germany’s Ambassadors
Diaspora

Due to the complexity of the relations between the countries, the role of the German ambassador in Israel and that of his Israeli counterpart in Germany were most certainly among the most challenging faced by members of the diplomatic corps in the two countries 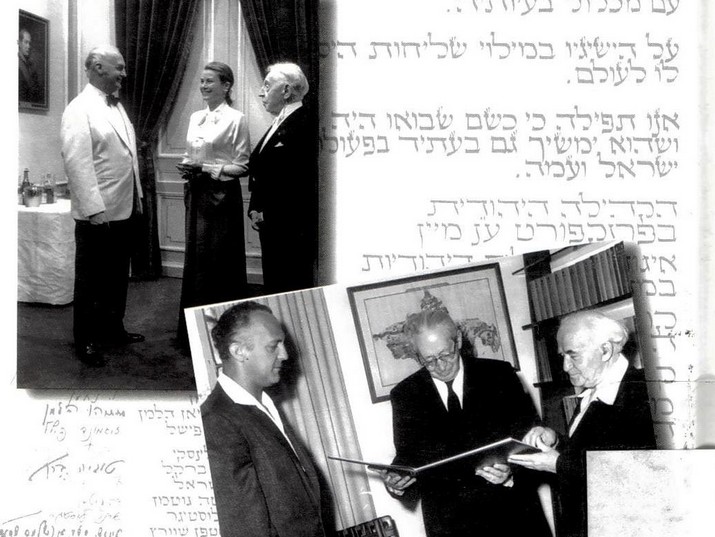 Since the establishment of diplomatic relations between Israel and Germany in 1965, many served as ambassadors for the two countries in Tel Aviv, Bonn and Berlin. Due to the complexity of the relations between the countries, the role of the German ambassador in Israel and that of his Israeli counterpart in Germany were most certainly among the most challenging faced by members of the diplomatic corps in the two countries. It is reasonable to assume that the ambassadors were aware of the demanding requirements and expectations of these representatives of their countries vis-a-vis a foreign government: skills in the art of diplomacy, preservation of national interests, understanding of the other side’s positions, realistic assessments regarding possible measures, and more.

For the past 50 years, ambassadors who have served in these positions have met with great success, and became relatively popular among the public of the host country. The political goals of both sides were ostensibly identical – improving ties with the other country, while preserving self-interest. And yet, self-interest was defined differently in each of the countries, due to the difficult history of the Holocaust period, which stayed with – and still lingers in – the relations between them. The West German public expected rapid “normalization” between Germans and Jews, and it was often not clear whether this was a kind of obfuscation and repression of historical guilt. In contrast, considerable portions of the Israeli public opposed the establishment of diplomatic relations or even any form of ties between the two countries, out of a fear that it would cause the horrific crime and its victims to be forgotten. The official Israeli representatives needed to heed the demands of the Israeli public, anticipating clarifications regarding the topic of collective and individual guilt of Germany and the Germans, but were also interested in advancing ties with the Federal Republic, since these ties were essential to Israel’s diplomatic and economic development.

During the first years of the relations, the presence of Germany’s ambassadors in Israel sparked demonstrations and other forms of public opposition.

It is well known that during the first trip of Rolf Pauls, West Germany’s first ambassador to Israel, to visit representatives of the Israeli government in 1965, the ambassador met with catcalls and even violence on the part of angry demonstrators. Klaus Schütz, who served in this same position between 1977 and 1981, also encountered catcalls while the German national anthem played during his official reception at the president’s residence in Jerusalem.

Asher Ben-Natan, the first Israeli Ambassador to Bonn, was also received by a large crowd on landing at the Cologne Airport in 1965, but no catcalls were sounded; the throngs, including journalists, were curious to see the official attaché of the Jewish state in Germany and to hear his first remarks on assuming his post. The ambassadors and consulate employees of both countries were witness to an ongoing series of critical incidents that posed a threat to the character of the relations, and were involved in devising solutions during times of crisis: the supply of German arms to various countries in the Middle East that threatened Israel’s security, the Six-Day War in 1967, the massacre of the Israeli athletes at the Olympic Games in 1972, the Yom Kippur War in 1973, the hijacking of Israeli and German airplanes during the days of left-wing terror in the 1970s, the Lebanon War in 1982, and the fall of the Berlin Wall and the unification of Germany in 1989-90.

The job of the ambassador, given the complex web of relations between Germany and Israel, including guilt, responsibility and the desire to develop “normal relations,” in addition to the complicated historical background, provided interesting angles for the composition of personal memoirs.

It therefore comes as no surprise that there is an impressive list of memoirs by ambassadors from both sides, and even a collection of articles that brings together texts by Israeli and German ambassadors over the decades.

The first to record their recollections of the activity between Israel and Germany was Felix Eliezer Shinnar, who was the director of the Israeli delegation in Germany, which opened immediately following the Reparations Agreement of 1952 in Luxembourg. Shinnar remained in this post until the establishment of diplomatic relations, and was involved in paving the way for improving them. Shinnar’s memoir was published – simultaneously in Hebrew and in German – already in 1967.

Asher Ben-Natan, the first Israeli Ambassador to Germany, beginning in 1965, published his book, “The Audacity to Live,” only in 2002, and a year later in Germay. This book is an autobiography, and also includes chapters about Ben-Natan’s work as an ambassador. These chapters were also published as a separate volume in 2005, but only in German.

The first ambassador from Germany to publish his recollections was Klaus Schütz. Already before his appointment in 1977, Schütz served as the Mayor of West Berlin, and in this role gained experience in managing sensitive situations. Schütz’s book was published in 1992, only in Germany. A description of his days as ambassador to Israel does not occupy a significant portion of the book, and perhaps this is why it was never translated into Hebrew.

Another Israeli ambassador, Yohanan Meroz, served at the embassy from 1974-1981, and published his report in 1986 in Germany, and two years later in Hebrew, under the title: “Was it All in Vain? – An Israeli Ambassador in Germany’s Summing Up.” Meroz lived in Bonn during difficult years for West-German society, under the shadow of terrorist attacks by left-wing extremists who collaborated with Palestinian activists – what makes his composition most interesting.

Niels Hansen, who was Germany’s ambassador to Israel from 1981-1985, wrote a non-fiction work that does not revolve around his memories as a diplomat, but rather the relations between the two countries during the tenure of Konrad Adenauer and David Ben-Gurion. In this aspect, this voluminous work greatly resembles that of Shinnar mentioned above. A compendium of articles from 2005 brings together additional texts on the topic, featuring writings by other ambassadors who did not publish books on their years of diplomatic service: Rolf Pauls, Eliashiv Ben-Horin, Jesko von Puttkamer, Benjamin Navon and others. The book, however, was published only in German, like many of the books mentioned here, while in Hebrew the only books available are those by Shinnar, Ben-Natan and Meroz.

Even the book by Avi Primor, who was ambassador to unified Germany, was never published in Hebrew. Books of this type, so it seems, found more readers among the German public – at least according to the estimates of the writers and the Israeli publishers.