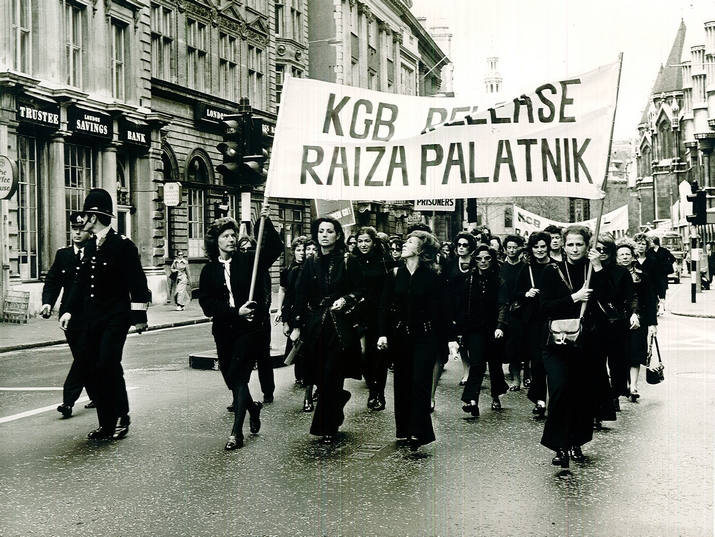 A protest by The 35's calling for the release of 35 year old Raiza Palatnik, a refusenik from Odessa. London, 1971. Photo by Sidney Harris, The 35's Collection, the Central Archives for the History of the Jewish People

As the lights were dimmed in the main hall of Montreal’s Salle Wilfrid-Pelletier concert venue, the audience gradually came to a hush. This was not just another show. The ticket holders were there to witness a performance by the legendary 200 year-old Bolshoi Ballet in a major Western city during the Cold War era – a rare spectacle indeed. But as the anticipation reached its peak and the curtain was finally raised, something happened. The dancers onstage and the majority of the audience looked on in horror as dozens of people seated in the front rows suddenly rose from their seats and silently filed out of the chamber. When they were gone, only one man was left standing in the large, now nearly empty front section. He was dressed in the pinstripe uniform of a prisoner.

This unusual demonstration was part of a historic protest movement. The group responsible was an organization known as “The 35’s”, or more formally – “The Women’s Campaign for Soviet Jewry”. Formed in London in May of 1971, the group was named in honor of Raiza Palatnik, a 35 year old Jewish woman who had been imprisoned in an isolated cell five months earlier in Odessa in the Soviet Union. Palatnik was accused of “keeping and distributing materials slanderous to the State” and had even dared to request to immigrate to Israel. She had not been allowed any contact with her parents or lawyer.

Upon hearing of the Palatnik case, a group of some thirty-five British women, most of whom were around the age of 35, gathered outside the Soviet Consulate in the United Kingdom, dressed in black, with signs calling for Raiza Palatnik’s release. “Towards the evening it was decided that we would sleep on the streets, and that had never been done since the suffragettes” says Zelda Harris, a founding member of the group.

Only around a dozen women spent the night on the street, but it was enough to get the attention of passersby who hooted and waved at them. “Taxi drivers were stopping and saying “Would you like a cigarette girls?'” Harris recalls. “At six o’ clock in the morning, we hadn’t hardly slept anyway, we got up and opposite us was a very swanky hotel, and we crept in, it was deadly quiet…we walked straight in to the ladies room. Imagine, thirteen women in black dresses, looking a bit scruffy…We had to wash up and use the toilet. The manager came in and said ‘Who are you? What are you doing?!'” The media loved the stunt.

Within hours, The 35’s received word from an Israeli diplomat that Palatnik, a quiet librarian turned political prisoner, had finally been moved to a regular jail cell. The tiny protest had made a real difference. The following week a thousand women in black from all over the UK marched along Whitehall to the Foreign Office. “That’s when we knew we had a movement” says Harris.

The group took up the cause of Soviet Jewish prisoners of conscience and “refuseniks” – the term given to Soviet Jews who were denied permission to emigrate and then persecuted for having asked. Among the prisoners they advocated for were such figures as Eduard Kuznetzov, Sylva Zalmanson, Ida Nudel, Anatoly Sharansky and Yuli Edelstein. Within a few years, The 35’s had branches in nine different countries spanning both sides of the Atlantic.

They targeted symbols of Soviet power and prestige, and few symbols were as prestigious as the famous Bolshoi Ballet which toured the world’s great cities, with the goal of promoting Russian and Soviet art and culture. The dancers travelled under the watchful eye of their KGB guards, who were there to prevent any threat to the performers, as well as any defections to the West. The soon-to-be famous ballet dancer Mikhail Baryshnikov, however, was able to successfully slip through the net in Toronto, only a few days after the disrupted Montreal performance, before officially requesting political asylum in Canada.

Less than two weeks later, in London, members of The 35’s again protested outside a Bolshoi performance. “People actually tore up their tickets and threw them out the car window” according to Zelda Harris. Inside the concert hall, white mice were let loose among the audience, and nails were thrown onstage. Harris attributes these actions to right-wing groups who also protested against the treatment of Russian Jews. She stresses that The 35’s steered clear of any form of violence.

The Soviet Embassy demanded that stronger action be taken after “only a few” of the protesters were arrested, threatening to cut short the visit if the safety of the dancers was not guaranteed, according to The Sentinel. The British Foreign office made clear: “…we regret the demonstrations because we want the Bolshoi to be a success”.

Indeed, the actions of The 35’s did not always receive widespread support in their own countries. Barbara Oberman, a leading member, attempted to raise the plight of Soviet Jewry in a meeting of the Board of Deputies of British Jews. She told the Jerusalem Post in 2007: “They responded in a polite British way, whose subtext read that I was a Jewish housewife who knew nothing, was not positioned to take any kind of action and should go home and busy myself with more appropriate matters”.

The 35’s, however, were not to be deterred, quite the opposite. Their tactics were designed to generate shock value and thus grab the media spotlight and public attention. They didn’t have the numbers to organize massive rallies, but their unorthodox methods often landed them on the front page. The organization was heavily influenced by the women’s liberation movement which was at its height at the time. The 35’s made ironic use of various traditional stigmas which often defined the role of women, and particularly housewives, in Western society. Harris describes the prevailing approach of the protests as “Look like a woman, don’t look like a man. If you’re gonna come out, put some makeup on and smile.”

At some demonstrations, passersby were asked to come and taste morsels from a typical meal provided to laborers in a Soviet prison camp:

In April, 1972, Jewish Soviet scientist Sergei Gurevitz was sacked from his post and forced to take a job as a cleaner in a laboratory. Like Palatnik, he too had applied for an exit visa to Israel. In response, The 35’s quickly announced that Bayswater Road, the location of the Soviet embassy in London, would be “unusually clean” the following Tuesday. When the day arrived, a phalanx of broom-wielding housewives positioned themselves outside the embassy and proceeded to sweep the grounds, in solidarity with Gurevitz and others who had suffered similar persecution.

On a different occasion, The 35’s rented a goat and paraded him down Bond Street while they themselves dressed as prisoners and wore nametags of actual refuseniks. The goat, which quickly escaped its bonds and ran off, was meant to symbolize the treatment of Soviet Jews, who many felt were being made the scapegoat of the Cold War struggle between the two great superpowers of the time.

By this point, the British authorities were keeping close tabs on the group. Harris tells of a demonstration during which she donned a lion suit, to protest the fact that the British rugby team, nicknamed “The Lions”, was going to play the Soviet Union. “Suddenly the detective in charge sidled up to me and said to me: ‘I know you’re in there Zelda,’ and I said ‘How in heaven’s name do you know it’s me?!’ And he said ‘Because I know your height, I know the size of your feet, I know the sound of your voice.’ They knew everything! They had files on all of us.”

Another tactic was the enlistment of celebrities and leading public figures to the cause, such as actresses Ingrid Bergman, Jane Fonda and Haley Mills, as well as philosophers like Bertrand Russell and Jean-Paul Sartre. Sartre in particular, was a major achievement for The 35’s, as the French intellectual had expressed pro-Soviet views in the past, and the support of such an influential figure had great significance in leftist circles.

The group took it upon itself to maintain constant contact with the prisoners and resfuseniks still held in the USSR through phone calls and tourist visits. They also kept in touch with families of prisoners, offering encouragement and information regarding the status of their imprisoned relatives, while also sending birthday and holiday greetings, as well as books, siddurs, matzos and other gifts.

“Adopt a Prisoner” campaigns were organized in which group members, as well as sympathetic families and politicians, would be assigned a prisoner to keep in touch with. Using these methods, The 35’s were especially effective in collecting up-to-date intelligence on the status of the prisoners and refuseniks, information which was then passed on to the “Nativ” organization.

Today, the actions of The 35’s are widely acknowledged as having played a key role in raising awareness of the plight of Soviet Jewry. This public awareness was often translated into political pressure, which in many cases resulted in the release of prisoners and refuseniks.

Raiza Palatnik, the woman whose ordeal started it all, was finally released after two years in prison, in December, 1972. She was soon allowed to immigrate to Israel, where she found work at the National Library. According to Lizetta Amir, a veteran librarian, and Rini Goldsmith, the director of the Foreign Language Catalog at the Library, Palatnik was a strikingly impressive, strong-willed woman, who never shied away from voicing her opinion and was highly respected for her courage and her successful struggle to reach Israel.

Most of the remaining refuseniks in Soviet Russia were allowed to leave in 1987, as part of Mikhail Gorbachev’s glasnost (openness) and perestroika (restructuring) policies. With the fall of the USSR in 1991, all restrictions on emigration were lifted.