Shloimy Alman's collection of photographs of Jewish London from the 1970s survive as a unique record of a disappeared world. 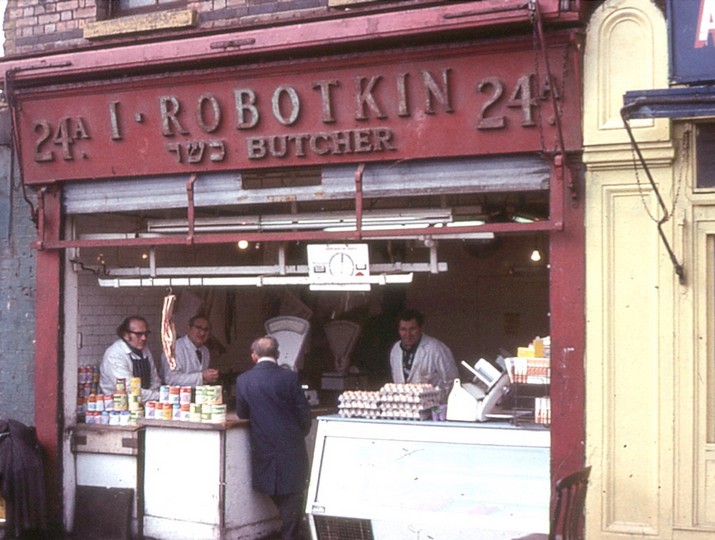 In May of 2019, during an extreme heatwave that hit Israel, a forest fire near the town of Modi’in forced Manchester-born Shloimy Alman and his wife Linda to evacuate their home in Moshav Kfar Daniel where they have lived since making Aliyah in 1978. Fleeing for safety, Shloimy grabbed just three items: passports, family photo albums and 7 boxes of color slides of London’s old Jewish East End that he’d taken in the mid-1970s.

The slides had sat inside Alman’s cupboard for more than 40 years but, during that week, I had visited from London to interview Shloimy and scan these previously unseen images. The images have since been printed and were displayed in an exhibition titled ‘Vanished Streets’, at London’s oldest Ashkenazi synagogue Sandys Row, on Sunday, the 6th of October, 2019 as part of the European Day of Jewish Culture.

I work at Sandys Row as the resident archivist and historian. The president there, Harvey Rifkind, is a great friend of Shloimy’s and told me about this unique collection of images from the 1970s of a world that has now largely disappeared.

Shloimy started taking these pictures in 1977. He was in his early twenties back then, living in Manchester and attending a Jewish Youth Workers’ conference in London. He arranged to meet the Yiddish poet Avraham Stencl who he had heard a great deal about growing up – his father, Moishe, had previously contributed many articles to Stencl’s monthly Yiddish magazine, Loshn un Lebn.

On their first walk, Stencl led Shloimy to Bevis Marks Synagogue, the oldest synagogue in London that was established by Sephardi Jews in the seventeenth century. “He walked very quickly for an old man, I had trouble keeping up with him. As we walked and talked, in Yiddish of course, he pointed out places on the way, where the Jews’ Free School had been, the site of the Jewish Soup Kitchen, Bloom’s restaurant on Whitechapel High St and the many small synagogues, which were still operating.”

Shloimy was amazed by the amount of Jewish institutions, shops, and people still evident. “People kept telling me the Jewish East End was dead but for me, coming from Manchester, it was buzzing with life and activity.”

They passed run-down tenement blocks and stopped briefly at Whitechapel Library, known as ‘the university of the ghetto.’ After their walk, Shloimy went with Stencl to a “Friends of Yiddish” meeting. There were about twenty people there who were all very welcoming. After this first visit Shloimy began attending these meetings regularly whilst visiting his parents-in-law in London. “I wanted to be in that atmosphere that my parents so loved, to hear Yiddish literature being spoken and talked about again. It was most important.”

After his initial walk around Whitechapel with Stencl, Shloimy started exploring by himself, often drifting around the streets coming across things by accident. “Knowing that places like Commercial Road were important, I’d wander along and see a Jewish shop name and photograph it.”

He spent days recording Jewish life, from shuls to delis, shops, market stalls, and traders. He recorded the textile-trimming merchants. He recorded kosher poulterers on Hessel Street. “Shop after shop, stalls with chickens plucked and hanging from a barrow, they were all surviving, all doing business, it was still a rich Jewish landscape.”

He took photographs of kosher wine merchants, the Grand Palais Yiddish Theatre and the Kosher Luncheon Club. He took slides of the Jewish bakeries – Free Co., Cohen’s, Kossoff’s, Grodzinski’s and bagel shops in East London. “They were all friendly, loved me coming in and chatting in Yiddish and taking a picture.”

He went into the Soup Kitchen on Brune Street, which was sending out pre-packed food to elderly Jews living in the area. On Brick Lane, he photographed Jewish booksellers, newsagents, textile merchants. “All these places existed, everything the community needed – it told me how large the community still was.”

On Cheshire Street he saw the work of Jewish cabinet makers outside their workshops and during one visit he managed to get inside the Cheshire Street Synagogue, “which was the most remarkable find, it was a Shabbat and the door was slightly open so I went inside and saw all this beautifully lathed woodwork done by the cabinet makers of the street.”

He photographed the entrance to Black Lion Yard, once known as ‘the Hatton Garden of the East End’ because of all the jewelry shops there, although most of the street and shops had been demolished by then. He took pictures of the Whitechapel Waste, of the market stalls and street life, of Stencl selling his magazine to an alter bubby (old grandmother), the London Hospital, the nearby Brady Street dwellings. He explored the back streets, visited little shops, tobacconists, market stalls and Jewish delis. “Roggs was my favorite, he’d always be in that old vest, sticking his great hairy arms into a barrel of cucumbers he pickled himself.”

He photographed the window of the room on Tyne Street where “Sholem Aleichem stayed on his way to America from Odessa.” Most of the time Shloimy walked alone but sometimes Stencl would join him.

Shloimy fell in love with the area and documented what he saw. He said, “I am not a photographer, I make no claim. The reason that I started this is I wanted to be able to show my children about Jewish life in England before I immigrated to Israel. It was obvious to me that what I was looking at was soon to vanish. It might be because I was an outsider that I saw this so acutely or because I had already witnessed this disappearance of Jewish life in Manchester. For an intense period of time, I photographed what I considered important landmarks and eating places of Jewish London.”

His photographs capture the era absolutely and survive as a unique record of a disappeared world.

A catalog of the exhibition photos can be ordered direct from Sandys Row Synagogue here.