A shopping list found among the treasures of the Cairo Genizah was scrawled on the back of a rather important document. 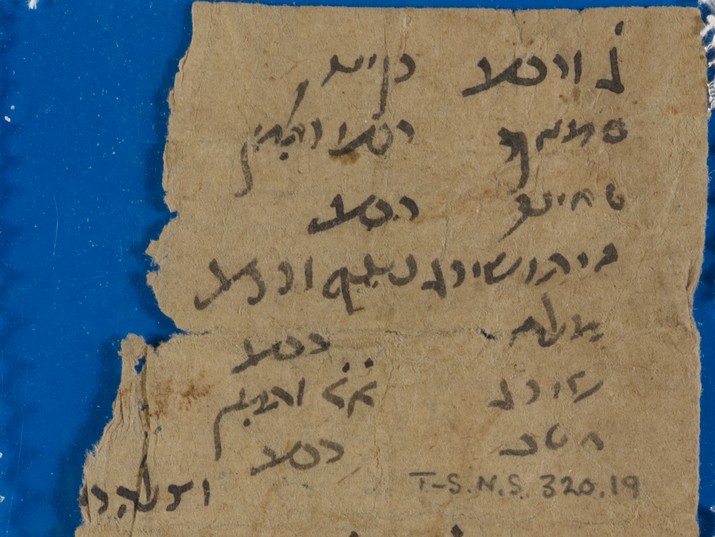 It happens to us all about once a week – the refrigerator and cabinets are suddenly bare and we need to go to the grocery store to restock. Most of us don’t have a special place to write a shopping list – a pad or a notebook dedicated to such mundane things. Typically, we will improvise, grabbing the closest piece of scrap paper to use for scribbling down a basic list of groceries to get us through the week.

It’s easy to forget that people have struggled with the same mundane parts of life as we do for thousands of years – things like grocery shopping and list-making – and like us, they improvised, finding creative solutions to everyday annoyances. In fact, the Cairo Genizah held one extreme example where a random, unremarkable shopping list was actually scrawled on the back of a torn-up divorce agreement from the Middle Ages.

The Ben Ezra Synagogue, originally built over a thousand years ago in Fustat, the heart of ancient Cairo had a special room which held a Genizah. The Genizah was a place where, per Jewish tradition, documents containing holy Jewish texts were deposited instead of simply throwing them in the trash. Over time, people began depositing any document written in Hebrew lettering, including items like marriage contracts, divorce papers, court documents, and private letters. Materials were deposited in this room from the time the synagogue opened through the 19th century. When it was rediscovered, the incredible collection of papers written in a variety of languages including Hebrew, Arabic, and Aramaic served as documentation of a thousand-year history of Jewish culture and society in the Middle East.

Among the treasures found inside the Genizah is what appeared at first glance to be a simple shopping list scrawled on a scrap of paper that is now held by the Cambridge University Library and is digitally preserved in the National Library of Israel collection. The list seemed perfectly ordinary, filled with everyday purchases that would be made in the local market. It was relatively detailed as each entry in the list included specific weights of each good to be purchased, using the dirham as the unit of measure. The dirham, equivalent to approximately 3.125 grams, is frequently mentioned in Jewish law as it was used to measure such things as the weight of a quantity of silver promised in a marriage contract.

This particular list included ordinary ingredients like sumac and tahini, as well as olive and sesame oil. When researchers turned the list over however, it became far less commonplace when they realized the list was written on the back of a fragment from a torn-up Get (Jewish divorce contract).

Talk about grabbing a piece of scrap paper.

As it turns out, this was not as unusual as it sounds. In accordance with Jewish law, when a marriage ends in divorce, the Get (divorce agreement), is torn to pieces so it cannot be used again. Historically, these agreements were written on the front side of large pieces of paper and the backs were left blank. Once the contract had served its purpose and was no longer necessary, the torn pieces were simply used for scrap paper – recycling ahead of its time. This might lend explanation as to why something so trivial as a shopping list would be scrawled on the back of a divorce contract.

The shopping lists found in the Cairo Genizah tend to be written in order of what was required for a specific recipe. This means that sometimes lists include the same product more than once but with different weights for each entry, as the product was needed for more than one recipe. For example, on this list, sesame oil is included twice as the shopper expected to purchase the amounts needed for two different dishes. The list read as follows:

Serving suggestion: For anyone wishing to recreate a recipe based on this list, it seems the best option would be to prepare a fresh batch of tahini. We recommend mixing raw tahini paste with some sumac and water. Add some sesame oil and salt to taste.   Discover a world of Jewish cooking: Exploring the Mysteries of Jewish Cuisine The Book That Taught Europeans How to Cook in Palestine The Simple Grain That Saved the State of Israel from Starvation