Broken promises, a lack of piety and a wife left behind – What forced a young Jew to leave his home and family in 11th-century Afghanistan? 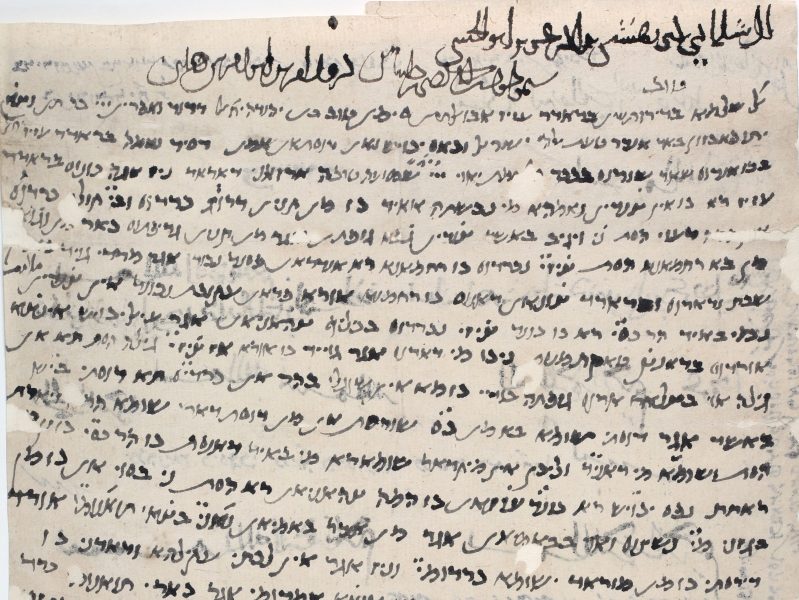 The first page of the 11th-century letter, written in Judeo-Persian, from "Yair" to Abu al-Hasan Siman-Tov, the National Library collections.

What has become known as the Afghan Genizah is a collection of thousands of manuscript fragments originating in medieval Afghanistan. A large portion of these texts were written in Afghan Jewish communities that we previously knew almost nothing about. In recent years, the National Library of Israel has been able to acquire nearly 300 pages of material from the collection. The study of these documents has shed a great deal of light on the lives of Jews living in Afghanistan nearly a thousand years ago – how they lived, worked, prayed and communicated, as well as how they interacted with their Muslim neighbors.

In the early 13th-century, these same Jewish communities were decimated by Genghis Khan’s Mongol hordes, along with the entire surrounding region of Khorasan. The fact that these documents were able to survive the devastation is likely a matter of luck more than anything else. The collection preserved at the National Library includes personal letters and business records, as well as legal, administrative and literary papers. The oldest were written in the 11th-century and the newest date to the early 13th-century.

One of the most interesting items in the trove is a letter written by a young Jewish man by the name of Yair, who had run into some trouble: Failed business ventures caused him to migrate from his hometown of Bamiyan to the community of Ghazni, some 94 miles away (over 150 kilometers), leaving behind his wife.

The young man also faced accusations that he had failed to observe the Sabbath and “committed falsehood regarding property.” Yair’s letter is addressed to a man known as Abu al-Hasan Siman-Tov, who may very well have been his brother-in-law. It was written in the 11th-century in Judeo-Persian (Persian written in Hebrew letters).

Here are some excerpts from the letter, as translated and transcribed by Ofir Haim:

“A thousand greetings to the beloved brother Abu al-Hasan Siman-Tov, may he have a long life, son of Abu Nasr, son of Daniyal. May God’s blessing and praise upon (his) body and soul (increase)…

The letter of the beloved brother arrived, may God keep him alive. I read (it). I was joyful at the news of his good health, may God bestow good tidings. Also I inform the beloved brother that these several letters (which) were written (saying) that I committed falsehood regarding property and broke promises, are all false claims. There should not be so much reproaching. If I took property, my affair and my reply are with the Merciful. I did not do a thing by which the Merciful was not pleased. If one says that I do not observe the Sabbath, I know such, brother, that the Mericful will not punish him because of that. These many reproaches should not be done by anyone. I did nothing contrary to (the customs of) people…

…this much should be known to you, that anyone who marries a woman does (this) for his own well-being, as all people have a (wife), not for this that I sit in Ghazni and she in Bamiyan. If I could have made a living in Bamiyan, it is true that I would have acted according to your will.

Furthermore, if this portion of the alms and what should be given that people must give had not existed, I would have come there immediately, whether I could have done a certain work or not…

You know that I own goods, and God, blessed be His name, has apportioned (to me) as you see – not with a generous hand, a hundred thousand thanks to God, blessed be His name. I cannot do any other work and I am not a man who is accustomed to travelling and being remote from home, and I cannot do (this). And you know that this business and work that I do, if I am absent from the shop for one day, I will be needy that day. Therefore, when I must be workless for half a year, the door of the shop is closed here, the supplies run out, and I sit there workless. If you say that the answer to that is that I sit here and they in Bamiyan, by no means do I accept this.

I cannot bring this work to an end, but I will make an effort that perhaps (if) I set aside these alms, I will immediately come there. I am concerned about the mother that I am very troubled about her, for I know that she is full of sorrow. However, she should not search for her happiness, others should look after some of it…

From Yair son of ‘ymyd/’ymyr

(To be sent) to Bamiyan…God, almighty and exalted, willing.

The ninth of (the month of) Elul

We do not know what response Yair received to his letter, or whether he was ever reunited with his family.

This article is based on research conducted by Ofir Haim, a graduate student in the Department of Middle Eastern History at the Hebrew University, and Dr. Yoel Finkelman, curator of the Judaica Collection at the National Library of Israel.

You can find more information on this subject in the article An Early Judeo-Persian Letter sent from Ghazna to Bāmiyān published in Bulletin of the Asia Institute New Series, Vol. 26 (2012), pp. 103-119   If you liked this article, try these: Tel Aviv Under Siege: Who Wrote the Mysterious Letter from the Underground? A Student Admission Request to the Hebrew University on the Eve of the Destruction of European Jewry In Vivid Color: Century-Old Postcards Depict the Lives of Jewish Immigrants to America