Who Was the Nazi Guest at a House Party in Jerusalem in 1933?

Home > Europe > Who Was the Nazi Guest at a House Party in Jerusalem in 1933?
Land of Israel

A Jewish judge and an SS officer walk into a salon in the Land of Israel…It may sound like the start of a joke but the following is a true story. 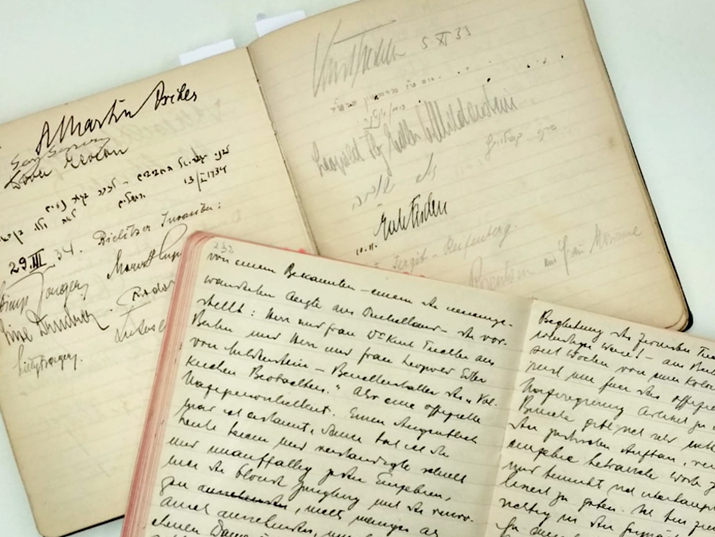 “Yesterday, like every Sunday evening, we had many guests over. Suddenly a group arrived led by one of Germany’s least pleasant doctors. He presented the others: Mrs. and Mr. Dr. Tuchler from Berlin and Mr. and Mrs. Leopold von Mildenstein – a reporter for the Völkischer Beobachter newspaper, meaning an official Nazi figure.”

This is how the Jewish Austrian writer, Moshe Ya’akov Ben-Gavriel, described the moment when a Nazi official and his wife arrived one evening at an event he held in his Jerusalem home in 1933. The words were jotted down by Ben-Gavriel in his personal diary, now preserved in the National Library of Israel archives.

Moshe Ya’akov Ben-Gavriel was born Eugen Hoeflich, in Vienna in 1891. During WWI, he served as an officer in the Austrian Army, and in this capacity, visited Jerusalem where he discovered his own personal connection to the Land of Israel. In 1927, Eugen immigrated to Jerusalem with his wife, changed his name to Moshe Yaakov Ben-Gavriel and began working as a journalist, writing European and American outlets.

Ben-Gavriel would, on occasion, host salons at his home on Ben Shetach Street in the heart of Jerusalem, in which people would gather to study and share ideas through discussion and debate. On the night in question, the German doctor who remained unnamed in Ben-Gavriel’s diary entry, brought Kurt Tuchler, a Jewish judge from Breslau who was visiting the country along with him to the event – though it appears from Ben-Gavriel’s account that the addition of the Nazi official and his wife was unexpected.

“For a moment I was surprised, in the end, I asked them to enter and I immediately updated everyone about who the man and the made-up lady with the ‘Aryan’ look were,” wrote Ben-Gavriel.

Tuchler had brought Leopold von Mildenstein along with him to the salon that evening. Von Mildenstein, an Austrian citizen, joined the Nazi party in 1929 and enlisted in the SS in 1932. He was the director of the SS office that dealt with Jewish affairs, a position that would later be held by Adolf Eichmann.

Interestingly enough, SS Officer Mildenstein was a supporter of the Zionist idea. He was in favor of a “humane solution” to the “Jewish problem” and was promoting the expulsion of the Jews of Europe to the Land of Israel as a way to achieve Hitler’s goals while avoiding widespread bloodshed.

It was for this purpose that Leopold von Mildenstein traveled to the Land of Israel in 1933 after the Nazis had come to power where he met his new Jewish friend, Judge Kurt Tuchler – to research and understand the realities on the ground in the hopes of implementing his solution. Mildenstein toured the land and excitedly wrote about his experiences for a Nazi newspaper, believing this to be the answer they were looking for.

“A few of the guests made themselves scarce,” wrote Ben-Gavriel, “The others actively yet cautiously participated in the discussion. I heard from the Nazi, a young and not unpleasant man, that he arrived from Berlin a few weeks ago accompanied by the jurist Tuchler – strange people! – and that they are traveling from settlement to settlement in order to write articles for this official newspaper.”

According to Ben-Gavriel’s account, Mildenstein was deeply engaged and inspired by his visit. While he was undoubtedly suspicious of the Nazi, he found himself scheduling an appointment to continue the conversation that began during the salon, though his journal does not indicate if that second meeting ever occurred.

“The guest was very excited about the building going on in the Land, even attempting to say a few words in Hebrew and generally trying to act in a cultured manner. I remained very cautious and tried to get more information out of him; for this purpose, even scheduling another meeting with him. We talked about all types of subjects, but regarding the developments in Germany – not a word!”

Before Mildenstein left the Ben-Gavriel home he signed their guestbook leaving his official mark on what must have been an interesting and unique evening.

As has been well-documented, the Nazi party eventually abandoned the idea of “Forced Migration” – expelling the Jews of Europe to Mandatory Palestine – in favor of the Final Solution.

Kurt Tuchler and Leopold von Mildenstein’s friendship continued long after the salon in 1933. Their relationship which lasted through the Holocaust and beyond became the subject of the 2011 Israeli documentary, “The Flat,” produced by Tuchler’s grandson, Arnon Goldfinger, which explored their unique connection.

Special thanks to Dr. Stefan Litt and Zachary Rothbart for their help in writing this article.