A Memory of the Last Jews of Yemen

Home > Diaspora > A Memory of the Last Jews of Yemen
Diaspora

In the 1980s, photographer, painter and poet Myriam Tangi took three separate trips to Yemen in the hopes of photographing the last Jews living in the country. 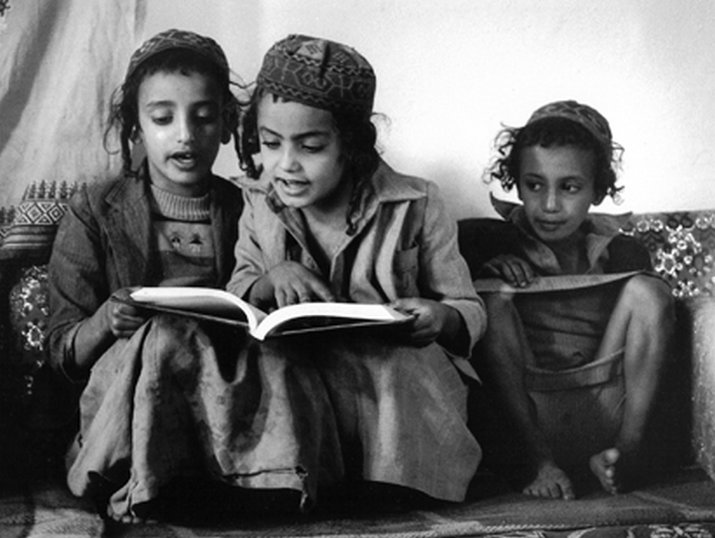 Three young Jewish boys studying, Al Hajar, Haydan, Yemen, 1983. The one in the center is Lewi Faez, who was around 6 years old at the time. He arrived in Israel in 1992 at the age of 16, with his 14 year-old wife and an infant. Photo by Myriam Tangi.

According to legend, Jewish history in Yemen dates back to the time of King Solomon and the request of the Queen of Sheba to see Hebrew craftsmen settle in her country. Indeed, some historians identify Sheba with the ancient Kingdom of Saba in the southern Arabian Peninsula. More recently, in 1949-50, about 49,000 Yemeni Jews were brought to the nascent State of Israel on secret flights during Operation Magic Carpet. As of 2017, it was believed that there remain approximately 50 Jews in the entirety of the country with most of them living in in a compound adjacent to the American Embassy in Sana’a, Yemen’s largest city and its capital.

As non-Muslims living in an Arabic country, the Jews of Yemen, one of the most ancient Jewish communities in the diaspora, were considered dhimmi, which literally means, “protected class.” As dhimmi, Jews had certain rights but also had to contend with a number of restrictions, including limits on their freedom of movement – For example, Jews were only permitted to travel within Yemen and could not venture beyond the borders of the country.

The Jews of Yemen were also forbidden from carrying the djambiha, a dagger-like sword carried by all Yemenite Muslim men around the waist. This restriction clearly indicated who among the men was not Muslim. Jews were restricted to certain crafts: jewelry making, leather working, shoe repair and metal works. Jewish women were permitted to weave baskets to sell at market.

Yemenite Jews were not allowed to own land and were under the protection of the sheikh of the village or the city where they lived. This meant that the sheikh was responsible for their safety and was obligated by law to protect them. The relationship between the community and the sheikh was often warm and sometimes even friendly.

In the 1980s, we set out on a journey to photograph the last few remaining Yemenite Jewish communities that were scattered throughout the country. There were at the time, approximately 300 to 400 Jews left in Yemen and only a few foreigners had travelled through this remote country at the tip of the Arabian Peninsula.

We made our way to different villages across the country including Beit Sinan in the Arhab district, about an hour north of Sana’a, the capital. The villages closer to Sana’a had stricter rules for code of dress. The Jewish women in the far off villages did not wear full niqabs, which covered the whole body, like the Muslim women did. Instead, they wore veils that covered only their heads. But as we drew nearer to the capital, the veils grew larger and women were expected to cover more. Muslims could enter Jewish homes at any moment, except on Shabbat.

We also travelled in a big truck through the steep roads of the mountainous regions to reach yet un-explored villages such as Al-Hajar, near Haydan and west of Sa’dah, a large city located in northern Yemen. The village of Wadi Amla was another destination; both are not far from the border of Saudi Arabia.

We were traveling as tourists. We made no mention of our Jewish identities for our own safety and for the safety of the local Jews. We were allowed to visit with the Jewish communities as we said we were looking to buy jewelry – a trade held by the local Jews. We also mentioned that we were vegetarians which gave us an opportunity to join a Jewish family for a meal. Not all of these small and dispersed Jewish communities had their own synagogues. We understood from our interactions with a particular community that one family owned a Torah scroll and that other Jews would gather in this family’s home for prayer services, as it was forbidden to visit the local synagogue.

These photos are a testament to the peaceful lives led by the Jews of Yemen at that time. The children would spend their days studying with their Mori, a teacher chosen by the community, or with their father who would multitask in maintaining control over the reading and studying while working. Since there was usually only one copy to read from, the local children often developed the ability to read a book from any angle.

While the situation in Yemen has changed, just a few decades ago this same country, which was so detached from the modern, Western way of life, gave us the impression of traveling back to biblical times, and allowed us to experience a different rhythm of life, typified by laid-back afternoons spent chewing Khat leaves.

This series of photographs has been recognized by the IPA (International Photography Awards) organization.