The exhibition "Life in Medieval Khorasan. A Geniza from the National Library of Israel" is on display at the State Hermitage Museum in St. Petersburg, Russia 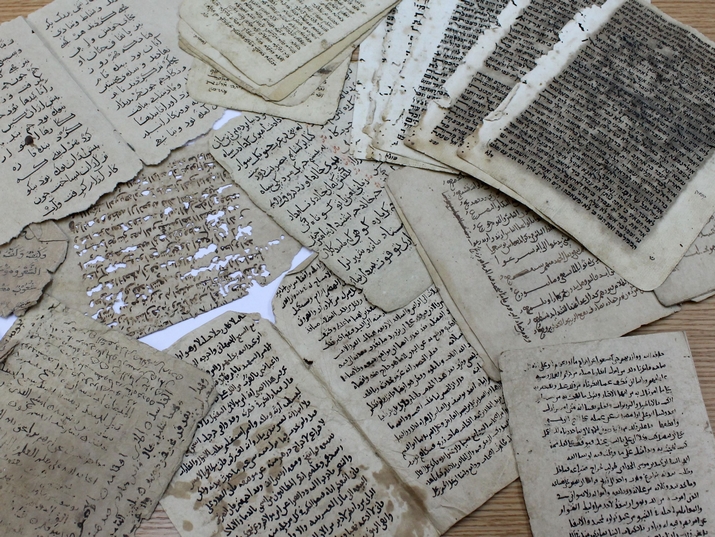 Documents from the historic Afghan Geniza. Photo by Polina Aizenberg, the National Library of Israel

Some two dozen extremely rare treasures from the National Library of Israel’s Afghan Geniza collection are being displayed to the public for the first time as part of “Life in Medieval Khorasan. A Geniza from the National Library of Israel” at the State Hermitage Museum in St. Petersburg. The exhibition also features rare artifacts from the Hermitage’s collections that will give a fuller sense of life in Medieval Khorasan.

The Afghan Geniza presents virtually the only original documentation about this once-thriving Jewish community on the Silk Road, as well as the region’s Islamic and Persian cultures prior to the devastating Mongol invasion. The 11th-13th century documents provide an unprecedented glimpse into the day-to-day life, society, and economy along the Silk Road, the ancient highway which once linked Europe and China.

The National Library of Israel’s Afghan Geniza holdings comprise nearly 300 pages, some 250 of which were acquired in 2016 with the generous support of the William Davidson Foundation and the Haim and Hanna Salomon Fund. It is considered perhaps the most important find of Hebrew manuscripts since the discovery of the Dead Sea Scrolls in the mid-20th century.

Much of the collection comes from an archive of the eleventh-century Abu Netzer family of Jewish traders living in and around the city of Bāmiyān, a once-bustling commercial center located on the Silk Road.  One fragment represents the earliest evidence of a rabbinic text found in Persian-speaking lands to the East of the rabbinic centers of Babylon. The collection, written in Persian, Arabic, Aramaic, and Judeo-Persian, also includes legal documents, liturgy, poetry, texts of Jewish law, a historical chronicle, and biblical passages.

“This is a particularly impressive find related to the lives and culture of Jews from this part of the world from the beginning of the second millennium,” explained Prof. Haggai Ben Shammai, a world-renowned expert on Jews of the Islamic world. According to Ben Shammai, the collection is of exceptional importance due to the previous dearth of first-hand accounts and evidence of Jewish life under local dynastic rule. Literary source materials had also been severely lacking until this discovery.

Another portion of the collection contains documents dating from the early 13th century, chronicling the broader Islamic culture on the eve of the devastating Mongol conquests of 1221. As a result of the destruction wrought by Genghis Khan and his army, almost no documentation of the Persian and Arabic culture and language of the region exists besides these documents.

Many items in the collection had been part of a local administrator’s archive, and contain administrative documents and fragments of religious and literary works, mainly in Persian. This material provides an unparalleled view into the workings of government administration, politics, and law in the region.

Though later Muslim scholars have written histories of the Islamic dynasties who reigned over the region, this singular collection of primary sources has shed light on uncharted areas of research including economics and geography, as well as  social and political history.

NLI has digitized the materials and made them available to the international community of scholars and the general public. They will be preserved and displayed in the National Library of Israel’s new landmark campus, now under construction adjacent to the Knesset (Israeli Parliament) in Jerusalem.

David Blumberg, Chairman of the National Library of Israel Board of Directors, said, “We are grateful to our partners at the Hermitage for this historic collaboration. The exhibit highlights the National Library of Israel’s role as a dynamic international cultural center dedicated to promoting discourse and opening access to knowledge. It reflects the timeless Jewish values of treasuring the power of texts to unify, educate, and inspire.”

The exhibition curator is Anton Pritula, leading researcher in the State Hermitage Museum’s Oriental Department, PhD in Philology. You can read more about the exhibition here.

The exhibition has been made possible with the generous support of Barbro and Bernard Osher and The David Berg Foundation.

Information on the Afghan Geniza documents included in the captions above is based on research conducted by Ofir Haim.

A First Glimpse into the Treasures of the Afghan Geniza

Rare: A Remnant of One of the Oldest Yom Kippur Prayer Books in the World