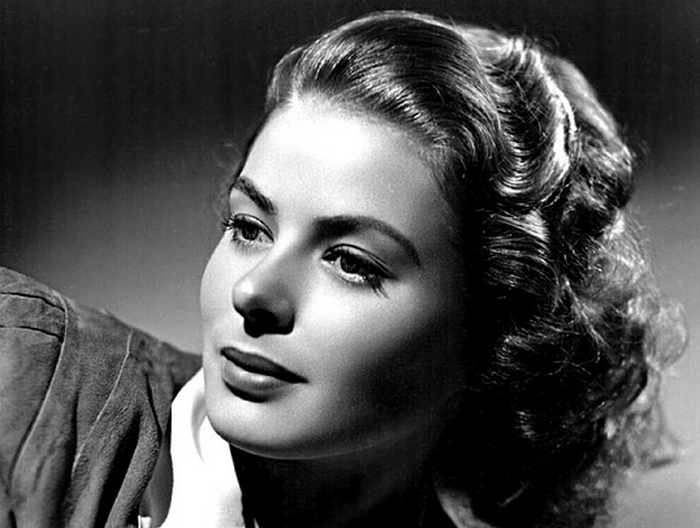 Ingrid Bergman. The iconic actress was a star of American and European films, with a career spanning over forty years

“Do I really have to eat it?” asks this female icon, this woman who represents all women who have loved. She stuck to her own principles against all odds, which caused her to be shunned in her country of birth, yet she never let this defeat her courage and spirit.

I looked into that wonderful face with the artfully enticing eyes which graced the silver screen and melted hearts in the time-warped, yet timeless movie Casablanca, and replied, “Yes you do”.

And so, Ingrid Bergman took a spoon to the watery cabbage soup, accompanied by dried rough black bread, a small potato, a slither of dried cod, a ¼ oz of sugar and margarine. This meal represented the daily intake of Sylva Zalmanson, a Prisoner of Zion in a Soviet labour camp. Ingrid had flown to London on her behalf. “It’s terrible,” she had said earlier about Sylva, but was currently referring to the food.

Ingrid had come to London in March 1973. She was invited by the “The 35’s”, also known as “The Women’s Campaign for Soviet Jewry“, to raise the profile of Sylva Zalmanson’s plight. Sylva was one of the few Jewish women to ever be incarcerated in the Soviet Union. In Hanukkah 1970, the news reached London that twelve Jews in Leningrad who had been refused visas to leave the Soviet Union for Israel, were arrested and charged with attempting to “hijack” an airplane. Consequently, Sylva’s husband, the pilot Eduard Kuznetzov and his co-pilot were sentenced to death. There was not a chink in the Iron Curtain at the time.

When Ingrid heard Sylva’s story, she rose to the challenge. Georges Weill, an internationally acclaimed jeweler, had designed a medallion engraved with the name, Sylva Zalmanson, within a Star of David. Hundreds of these medallions were reproduced in solid silver and, with several special orders in gold. A gold version was to be presented to Ingrid Bergman that day.

Everyone was busy. I was one of the women in black demonstrating outside the Imperial Hotel in the heart of London, where she was staying. Suddenly Big D, our leader, called me over and said, “She has to be interviewed by the BBC. They’ll be here any minute! Would you take her up to her room and stay with her for the interview?”

Who would say no?

As soon as we entered the ornate period style suite, she collapsed into a pink brocade antique wingchair. Her nobility of effort, paired with the adoration and esteem in which the public held her, did little to offset the harrowing and emotional experience.

I poured her a small brandy and handed her a large glass of water. She smiled and seemingly relaxed. At that moment, there was a tap on the door. The female journalist entered, microphone in hand.

At the end of the interview, Ingrid was asked, “Was it due to your own personal suffering that you identified with Sylva?” (In the 1950s, as a result of her torrid and turbulent love affair with the Italian director, Roberto Rossellini and the subsequent birth of their son, she was scandalized and denounced in the United States and Sweden, an indication of the puritanical times).

Those beautiful eyes widened, “Not at all,” she said. “My suffering, as you call it, was of my own doing. Sylva has been denied every person’s human right, by a cruel and tyrannical regime”. I found that to be deeply profound.