How the famous scholar of Kabbalah experimented with secret mystical techniques. 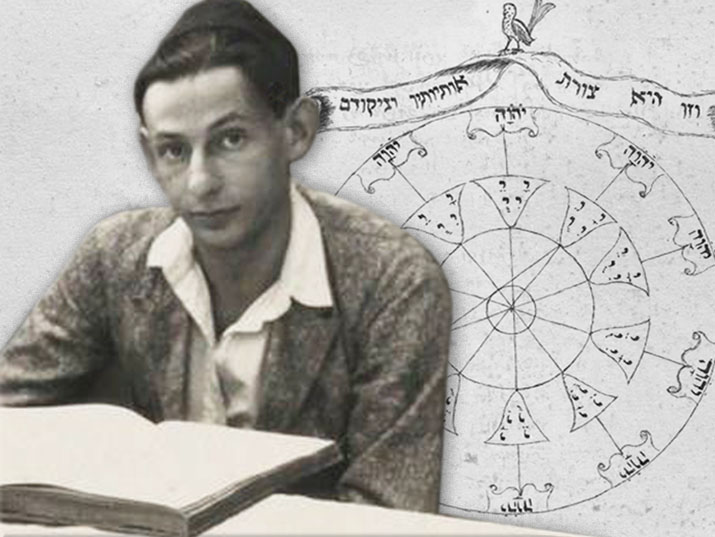 Gershom Scholem, at the age of 28, studying the Zohar, Sukkot, October 1925. The photograph was taken in Mandatory Palestine.

He came into the world toward the end of 1897, the fourth son of Betty and Arthur Scholem, an assimilated middle-class Jewish couple living in Berlin, capital of the German empire. The child learned about Zionism and the study of religion from his uncle Theobald, his father’s younger brother. Later, and more systematically, he would deepen his knowledge and intellectual and national commitment (for him, these were not contradictory) in the intellectual circles of the universities of Berlin and Munich. After graduating, he would leave the Berlin of his youth, and at the age of twenty-five would immigrate to Mandatory Palestine and become a lecturer at the newly established Hebrew University in Jerusalem.

Thanks to his groundbreaking research in a new academic field that he established in the country — the study of Kabbala and Jewish mysticism — the name Gershom Scholem is widely known across Israel today, decades after his death. He was awarded the Israel Prize, the Bialik Prize and several honorary doctorates. He participated in dozens of academic and public committees and eventually the entire contents of his private library came to the National Library upon his death.

But for at least one moment, all of this simply was not enough. Before he was to gain widespread recognition, there was a point when the young researcher wished to go a step beyond the classic scholarly approach: He wanted to try his hand at what he had learned.

A single piece of written evidence attests to that moment and is found in a single paragraph written by Scholem, buried on page 161 of the Hebrew translation of From Berlin to Jerusalem — a paragraph with no parallel in either the English or German edition of the book. According to his own testimony, the scholar and historian traded his intellectual detachment for practical experimentation, and he decided to try the techniques he had found in ancient manuscripts on himself.

In his autobiography, From Berlin to Jerusalem, Scholem wrote:

“I had been working on my dissertation for two years and began reading the masterpieces of the ancient Kabbalah in order, as many as I could lay my hands on, in both print and manuscript form. In Munich there were several books by Abraham Abulafia (in manuscript form) and I began to wonder, and even tried to follow some of his instructions in practice and was convinced that they were changing the state of my consciousness and I realized that one must differentiate between the various goals of different Kabbalistic methods, and not place them all in the same pot. I read the Zohar, but without commentaries; I tried to understand what I was looking at and had yet to broach the questions of historical criticism, and what is more, it immediately became clear to me that one must not ask questions of this kind without first going through the midrashic literature…”

In September 1919, Scholem arrived at the Bayerische Staatsbibliothek (the Bavarian State Library) in Munich in order to write his dissertation. Among the Kabbalistic manuscripts preserved there, Scholem found fifty manuscripts of works by Abraham Abulafia, who at the time was considered to be one of the fathers of Kabbalah and even a possible author of the Zohar. Scholem decided to try a few of the techniques he found in Abulafia’s manuscripts on himself.

At age thirty, the Kabbalist Abraham Abulafia experienced a prophetic vision commanding him to meet with the pope with the purpose of converting him to Judaism. The year was 1270 CE. From the moment of revelation until his death in late 1291 or the beginning of 1292, Abulafia wrote close to fifty original works. Alongside his commentaries — among them a commentary on Maimonides’ Guide for the Perplexed — Abulafia devoted most of his writing to the compilation of several instruction manuals on how to achieve prophecy and complete devotion to God.

Abulafia suggests that the spring of divine prophecy is reached by means of the divine names. The use of sacred names is not foreign to Judaism, and already in the mystical Hekhalot and Merkava literature we find some of the Talmudic sages making use of them in order to ascend to the upper spheres, with the goal of encountering the occupant of the divine throne. Abulafia went so far as to claim that it was precisely through the dissolution of the names of God and the creation of new ones that the practitioner could achieve a prophetic state.

It is doubtful whether we can replicate the specific techniques suggested by Abulafia and attempted by Gershom Scholem in Munich. However, since Abulafia’s Kabbalistic method is systematic and orderly, we can sketch the main process at its core, as interpreted by Kabbalah scholar Moshe Idel.

The contemplation of the divine names is divided into three stages: writing, speech and thought.  First one writes the holy name in its various permutations (“Take pen, parchment and ink and write and combine the names,” writes Abulafia in the book Otsar Eden Ganuz [“Treasure of the Hidden Paradise”]). In the book Or Hasekhel [“Light of the Mind”], a mystical guide compiled by Abulafia of which several copies can be found in the manuscript collection of the Munich library, he focuses on the tetragrammaton Y-H-W-H, which he takes apart and reassembles. To each of the four letters of the name, Abulafia adds the Hebrew letter aleph — a letter he believed was part of the original name of God (A”Y, A”H, A”W, A”H), before adding diacritical marks (niqqud) to these combinations based on five Hebrew vowels (holam, kamats, hiriq, tseirei, kubbuts). 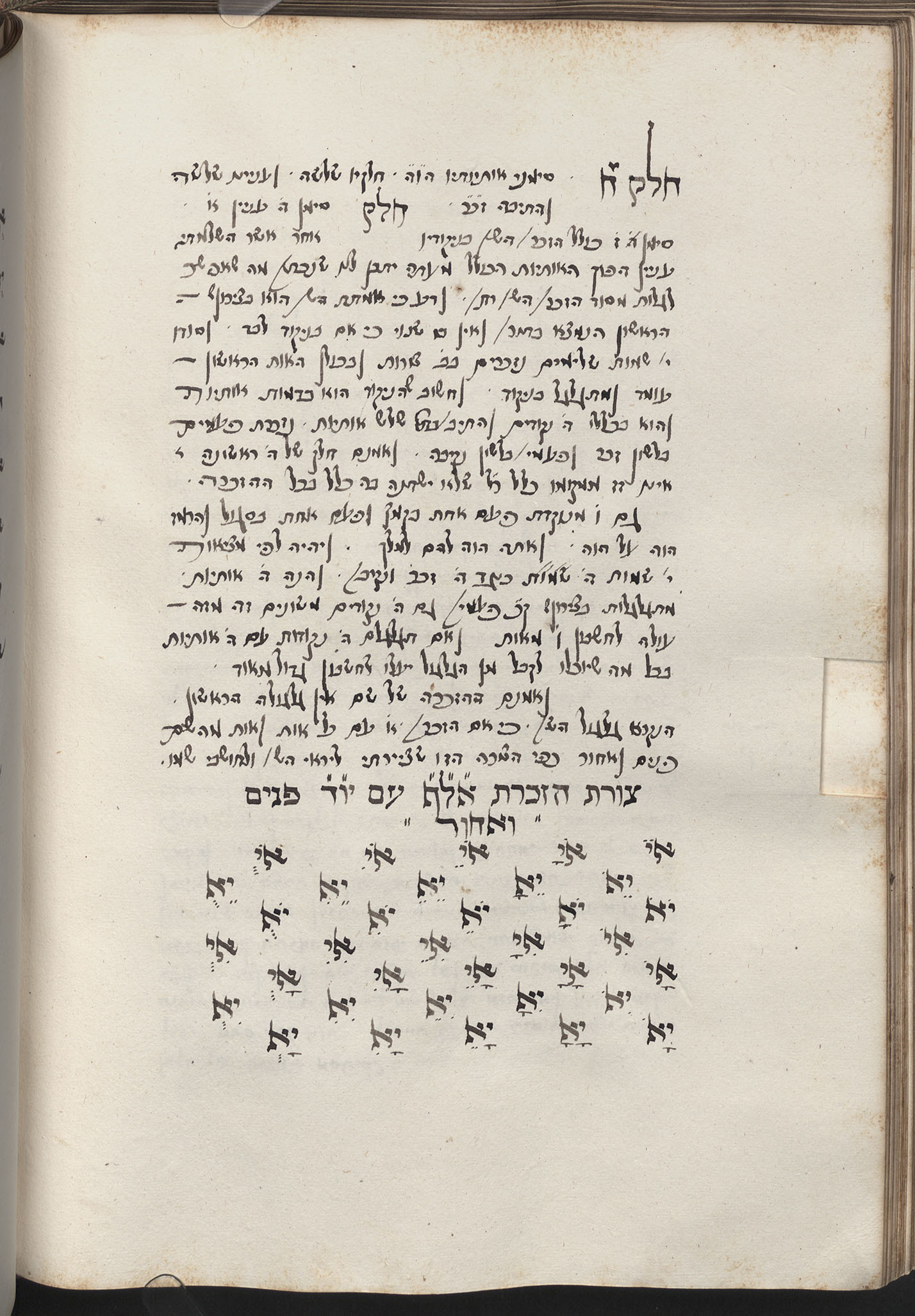 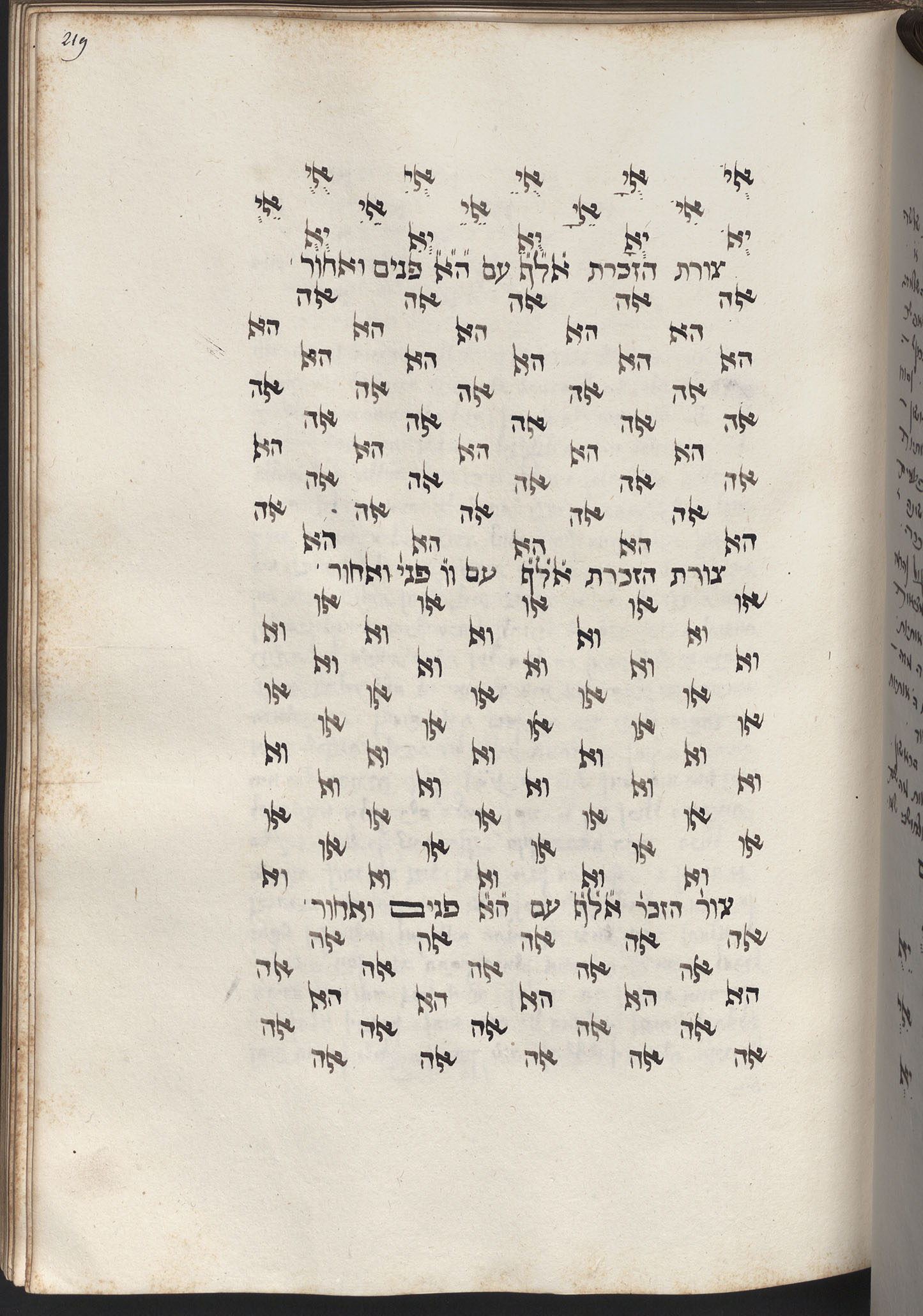 The practitioner is then required to recite aloud the resulting four tables. This part of the practice is more complicated. First the prophesier must sing all of the combinations with their various vocalizations. Abulafia believed that, like music, combinations of Hebrew letters can stir the soul. The melody, when applied to the letter combinations, ensures that the power of the names spreads through the body, the musical vibrations accentuating and strengthening the sacred utterances.

During the singing of the names, the practitioner must maintain a uniform rhythm of breathing. This is a technical process consisting of three components: breathing in before speaking, breathing out while singing, and at the end, resting between the exhale and the next intake of breath, at which point the practitioner continues to the next letter. Abulafia believed that the single breath (divided into these three segments), contains the power to enhance the human spirit.

While singing and breathing correctly, the practitioner must also ensure his head moves in accordance with the vocalization of the letters. Detailed instructions for this are found in Abulafia’s book Hayeii Haolam Haba (“The Life of the World to Come”). The goal of the movement of the head is not to mimic the shape of the letters, but rather to differentiate between them while reading: “When you enunciate the vowel of the letter, raise your head up against the sky and close your eyes and open your mouth and illuminate your words…”

And he closes his eyes and directs his focus, and his first focus is to draw [in his imagination] four camps of Shekhina or Mishkan surrounding him and four, precious, round-shaped flags surrounding the fifth camp.

Only at this stage, according to Abulafia, and only after all the previous stages have been performed correctly, can the prophesier reach the highest level of human consciousness: prophecy.

Ultimately, the doctoral dissertation Scholem intended to write about the linguistic concept of Abraham Abulafia did not materialize. The dissertation he submitted dealt with the origins of Sefer Habahir, which scholars consider to be the earliest known Kabbalistic work. Several manuscripts of Sefer Habahir are preserved in the Munich library, including the earliest manuscript of this treatise, from the end of the thirteenth century. Scholem did not desert Abraham Abulafia, and continued to study the ecstatic Kabbalist for many decades after.

There is no other reference to Scholem’s unique experiments in his writing. According to Moshe Idel, this stemmed from Scholem’s uncertain position at the start of his academic career. As the founder of a new field of academic research, the study of the Kabbalah, Scholem spent most of his professional career as the only lecturer on the subject at the Hebrew University. In fact, until his death, he was the only professor of Kabbalah to be found anywhere in the world and was often considered an eccentric outsider by the Talmudic and Biblical scholars of the Hebrew University. According to Idel, speaking too freely about his strange mystical experiences, could have been “grounds for dismissal.”

Many thanks to David Lang, Yacov Fuchs, Yuval de Malach and Zvi Leshem for their help in the preparation of this article.

Gershom Scholem, From Berlin to Jerusalem and Back, Waltham, MA, Brandeis University Press, 2018