The 19th Century Jewish Orientalist Who Took a Stand Against Racism

Rabbi Márton Schreiner, a religious educator, orientalist and scholar of Semitic languages, struggled against the Ethnic Cultural Movement’s intent to be substitute for Jewish religious life. 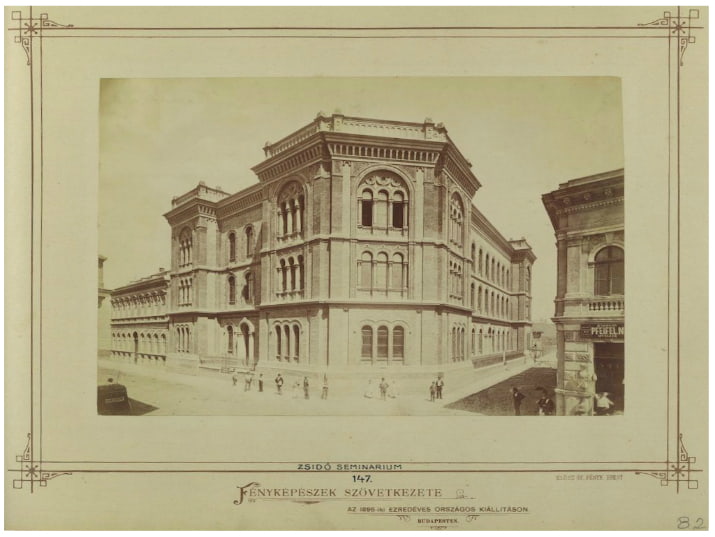 The building of the University of Jewish Studies at Guttenberg Square in Budapest towards the end of the 19th century. (Photo: Fortepan / Capital Archives of Budapest. Archive reference: HU.BFL.XV.19.d.1.05.161)

Rabbi Márton Schreiner was active mainly between 1881 and 1902 in Hungary and Germany. His manuscripts kept at the National Library indicate that he opposed the racist element of the ethnic cultural ideas of the period (biological anthropology), according to which Judaism is a race community (a concept based on the idea that race is an unchanging hereditary characteristic). In addition, he saw the cultivation of religious customs as a historical necessity resulting in the liberation of the Jewish spirit. He also appealed against the German liberal parties and their Jewish representatives who adopted the ethnic cultural thoughts that did not see any contradiction between the Torah and the discoveries of science, and sought for a total separation between them:

“The liberal representatives [referring to Jewish politicians] have forgotten that the Jewish community is a religious community and not a race community. …”

“We must realize in our religious lives that our love for the Jewish customs and Jewish life does not require supernatural support. We recognize that our institutions [referring to the Jewish religious community and its institutions] are historical needs …”

“If the Liberal Party wants to be the outpost of the Reform Judaism, then it has no justification within the community. …”

“One of the movements that tries to replace the historical religions is the “Ethnic Cultural Movement” [Ethnische Kulturbewegung]. To the extent that it seeks to realize the general moral ideals, it should be accepted with joy from the point of view of Judaism. But, it cannot serve as a substitute for religion and Judaism in particular. … The historical religions are inextricably inconsistent with the scientific results of science. If Judaism is defined as compatible with science, it is no longer Judaism. … As for the morality of life: Judaism teaches effectively this morality without relating to its believers level of education. The worship of God, the holidays, and certainly the Jewish institutions, have always reminded the followers of Judaism of the teachings of the Torah. …”

“The recent reports of the Board of Directors indicate that in the past three years 347 members of the community have left Judaism … , but we believe that … Judaism, as the Bible science opines today, has been a religious community since the days of the Second Temple, which reaches beyond the borders of the nation … . Our community, in its special status, is the basis of Christianity and Islam. …”

(Quotations from Schreiner’s manuscripts written following his activities and involvement in the life of the Jewish community in Berlin. Archive reference at the National Library of Israel: ARC. Ms. Var. 347 03 05)

Márton Schreiner was born in the city of Nagyvárad (today Romanian Oradea) in Transylvania in 1863. A study of the documents in his personal archives at the National Library reveals that his family was a relatively poor. His father, Albert Schreiner, who died during Márton’s youth, served as an official of the local community and a highly knowledgeable Jewish religious scholar who also gave his son the basic knowledge of Jewish literature.

He completed high school at a Catholic school in his hometown. After receiving his matriculation certificate, he moved to Budapest, where he signed up to the Jewish Theological Seminary, also known as University of Jewish Studies (Országos Rabbiképző – Zsidó Egyetem). At the same time he studied at the University of Budapest (today: Eötvös Loránd Tudományegyetem). His spiritual development was significantly influenced by the well-known lecturers of the Theological Seminary, such as Benjamin Bacher, Bloch Mózes Löb and David Kaufmann. At the University of Budapest, Schreiner spent some time mainly studying philosophy and Arabic. He was a student of the great scholar and researcher in the field of Islamic studies, Ignác Goldziher. Schreiner’s correspondence with Goldziher is famous. According to Kinga Dévényi, Schreiner wrote more than 150 letters to Goldziher. The letters are a part of the Oriental collection of the Hungarian Academy of Sciences. Parts of the letters were published in Goldziher’s diary edited by Rabbi Alexander (Sándor) Scheiber.

He received his doctorate in 1886 based on his scientific work Supplements to the History of Biblical Pronunciation, which he published already a year earlier. He completed his studies at the Jewish Theological Seminary and served as a rabbi of Dunapentele community (today Dunaújváros).

In 1887 he received a rabbinical ordination certificate and moved to the Csurgó community, which sought to employ a rabbi who studied at the Rabbinical Training Institute.

As a rabbi, Schreiner focused on youth education. Thus he introduced the practice of the boys’ prayer in Csurgó’s community. He delivered his sermons and speeches in Hungarian and German. Some of them he published in 1887. The National Library of Israel holds about 70 handwritten sermons and speeches that Schreiner delivered in many communities in which he hosted or performed for events and festivals between 1881 and 1892.

Teacher at the Jewish teachers’ training seminary in Budapest

Schreiner felt uncomfortable in the small community of Csurgó and tried to apply for a position in larger communities. In 1891 he received a teacher position at the Institute for the Training of Jewish Teachers in Budapest (Országos Izraelita Tanítóképző Intézet). As a teacher, Schreiner showed great responsibility for the education of the future Jewish teachers. He focused on pedagogic tasks and wrote a textbook for religious education on the prophets of Israel. He also taught religion at the Catholic high school )Nagyváradi Premontrei Főgimnázium( where he himself graduated in 1881. Evidence of this is found in the examination notebooks of his students, which Schreiner kept in his archive. Among his students: Armin Stern, Vilmos Rosenberg, the future Hebrew teacher Henrik Blau, the author Kornél Hüvös and many others.

Despite his devotion to his role as rabbi and lover of Jewish religious education, Schreiner always aspired to academia. His search for an opportunity to engage in scientific research eventually led him to transit to Germany.

Quite a few documents, such as the protocols and drafts of Schreiner indicate that he was involved and took actively part in the politics of the Berliner Jewish community. He supported the constitutional equality of the Jewish religion with the Christian religion, but opposed Jewish religious observance on Sundays instead of or in addition to Sabbath.

Lecturer at the Graduate School of Jewish Studies

Schreiner tried to apply for a position as a lecturer at the Hildesheimer Rabbinical Seminary (Rabbinerseminar zu Berlin). Although he was rejected by David Cassel (prominent docent of the above institute), but later, about eleven months after Cassel’s death, he was accepted as a full professor supported by Moritz Lazarus in December 1893. There, too, his full effort and obligation to his students were his characteristics. He taught linguistics, religious history of Semitic nations, religious philosophy, interpretation of ancient texts, and more. He felt at his best in Berlin. He was an inspiring teacher arousing interest among his listeners. Some of his students: Leo Baeck, George Alexander Kohut, Yehuda L. Magnes, Shmuel Avraham Poznanski, Elyakim Gotthold Weil, and others.

Schreiner believed that it was inconceivable to be engaged in the study of languages ​​without taking into account the philosophy and the religious-cultural history of the peoples. He referred to any text intended for interpretation as a historical-intellectual document of humanity. He studied the Islamic sources in their original language in order to explore the post-Islamic influences on Jewish literature, religious philosophy, the history of sects and linguistics. The study of these influences was the main subject of Schreiner’s scientific activity. Although all, this important and rich activity was suddenly interrupted when Schreiner became mentally ill in 1902. He was interned in the Lankwitz Sanatorium in Berlin. The National Library of Israel holds a few letters that he sent and received in this chapter of his life. The letters indicate that despite his illness, he kept in touch with colleagues and relatives remaining in the sanatorium until his death in 1921. Márton Schreiner’s personal archive, containing biographical material, notes, lectures, articles, sermons, correspondence and some handwriting of his father, was deposited at the National Library of Israel in the second half of 1965.

The Martin (Márton) Schreiner Archive has been reviewed and described thanks to the generous support of The Leir Foundation.

The Rabbi Who Performed Scientific Research From a Hungarian Prison

Tevye the Milkman and the Fight Against Assimilation in Eastern Europe

The Value of The Individual – according to Mathias Aharon Friedmann.