Water vs. Corona? Don’t Try This at Home!

Curing diseases, restoring organs, revitalizing the body and even resurrecting the dead! Rare caricatures from 19th-century England prove that strange folk remedies have been with us for a while… 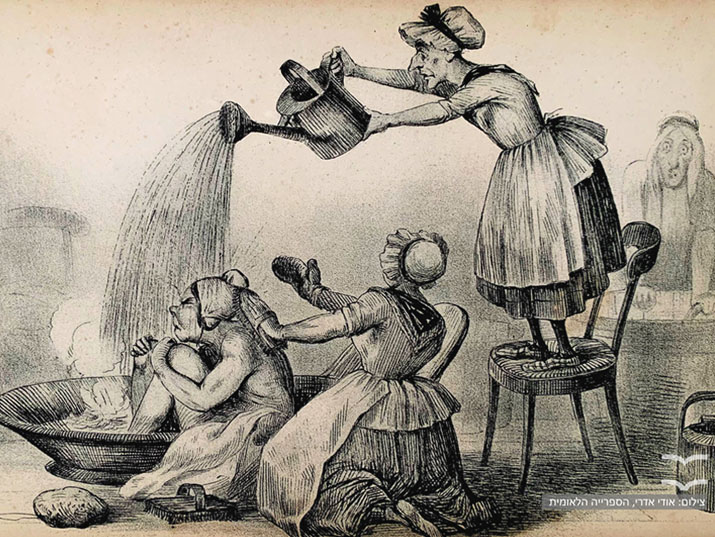 A common theme: A patient sits naked in the bath, receiving a shower of hot or cold water, "The Sure Water Cure", the Sidney M. Edelstein Collection at the National Library of Israel

Has anyone tried to sell you an anti-coronavirus machine recently? We suggest you pause for a moment before you hit that “Buy Now!” button…This isn’t the first time that our society has been inundated with promises of miracle cures of one type or another. Perhaps you’ve heard of something known as “Hydropathy”? Well, a series of lithograph postcards preserved in the National Library of Israel’s Sidney M. Edelstein Collection, which were printed in the satirical book, The Sure Water Cure, (Messrs Fores, London, 1843) tells us of a series of weird and cruel attempts at healing, alongside a thriving and criminal water-treatment industry. Perhaps the logic used here was something along the lines of, “If these methods don’t kill you, congratulations – no silly virus will stand a chance…”

Nowadays, we’re familiar with modern water-based therapies and their great contribution to the field of orthopedics, the development of motor skills, as well as emotional development. This modern method of treatment is known as ‘hydrotherapy’. In the past, more than a century ago, water medicine was referred to as ‘hydropathy’ or ‘water cure’. This school of thought gained momentum and became extremely popular in the 19th and early 20th centuries. It even spawned an entire field of alternative medical literature.

Doctors estimated that water might have healing properties that could be harnessed, for example, by manipulating water temperature or water pressure, or transferring water through an assortment of odd contraptions. In general, their observation was correct: water can indeed be used effectively in certain situations for healing purposes. For example, water treatments were found to be successful in reducing fevers and high blood pressure, and scientists hurriedly assumed that they had found the new miracle cure. It wasn’t long before charlatans caught wind of the startling revelation, and “holy” and “miraculous” solutions to various ailments began appearing by the dozen.

Among promises made to anyone willing to listen, were the far-fetched assurances that various methods of water treatment were capable of rejuvenating one’s youth and restoring missing limbs. There were even claims that special, secret treatments could bring a person back from the dead. The postcard here displays a real advertisement, with the head of a water pump shaped as a cross, alluding to the resurrection of Jesus of Nazareth. The advertisement declares:

“The Sure Water Cure – Amputations restored the dead revived and age hydropathicalized into youth.”

In the late 19th century, it wasn’t uncommon to see amputees and elderly people standing in line for ridiculous, unreasonable treatments. Gradually, and in order to increase revenue, the practitioners promised that water therapy could cure mental and spiritual illnesses, such as insomnia, suicidal tendencies, manic-depressive disorders, as well as severe physical illnesses such as paralysis or arthritis. Toward the end of the 19th-century, the phenomenon was so popular and widespread, that a series of medical caricatures were printed in England, warning the public of the false “miracle cure” and poking fun at the trend.

Hydropathy was based on external and internal water treatments. One of the treatments the public was warned about came to be known as “The Mummy State”. The below illustration shows a patient lying in his bed (probably suffering from the flu, a fever, or some other malaise), tightly wrapped up in blankets like a mummy, as a machine pumps generous quantities of water into his body through a tube.

The process is described on the back of the caricature, in words that serve as biting criticism of a gullible public:

The patient […] is tightly enveloped in blankets to perspire, if he lives long enough he is usually made a Mummy of or cured, the chances are equal. The hands being confined. Water is given plentifully through a tube, obviously those who thus expect to be cured, will suck in any thing, any quantity, and at any price!”

Or in other words: When in a panic, you’ll buy whatever you’re told works.

Many of the caricatures show a patient sitting naked in a bathtub receiving a shower of hot or cold water (depending on the treatment) in the hopes of curing some mental illness. The skeptics continued to cast doubt, and instead of recommending the treatment to the public – suggested it be used on members of the British Parliament. The back of the postcard reads: “…a Douche is in preparation expressly adapted for the use of M.Ps. as it will be found extremely efficacious in clearing the intellectual depository and in supplying the said vacuum!”

The mentally-ill population suffered in particular from these aquatic “miracle cures,” which were especially prevalent in London’s horrific 19th-century psychiatric institutions. In order to extract the disease from one’s head, treatment methods sometimes included plunging the patient’s head into a bucket of water, while he or she was held upside down, using ropes and pulleys. The torturous method, which harkens back to medieval times, proved itself ineffective in treating diseases of the mind. However, over the years, various intelligence agencies have controversially used similar methods, involving the simulation of a sensation of drowning, while attempting to extract secrets from people who weren’t interested in disclosing them.

Water therapy treatments were a hit more than a century ago. At the beginning of the 20th century and with the establishment of modern medicine, the cruel treatments were abandoned. But if anything can be learned from the past, it’s that people will always take advantage of humankind’s desire for health, and sell all kinds of tricks, instruments, and concoctions, which will “guarantee” quick cures or a miracle. So the next time you hear about an anti-corona device or an all-curing wonder-bath which fits in your own living room, don’t be quick to order that special delivery – go to a doctor. Stay safe.

Many thanks to Chaya Meier Herr of  the Sidney M. Edelstein Center for the History and Philosophy of Science, Technology and Medicine for her assistance in preparing this article.