Can You Sell Judaism Like You Sell Toothpaste? The Uproar Over Advertising Jewish life

Home > posters > Can You Sell Judaism Like You Sell Toothpaste? The Uproar Over Advertising Jewish life
Diaspora 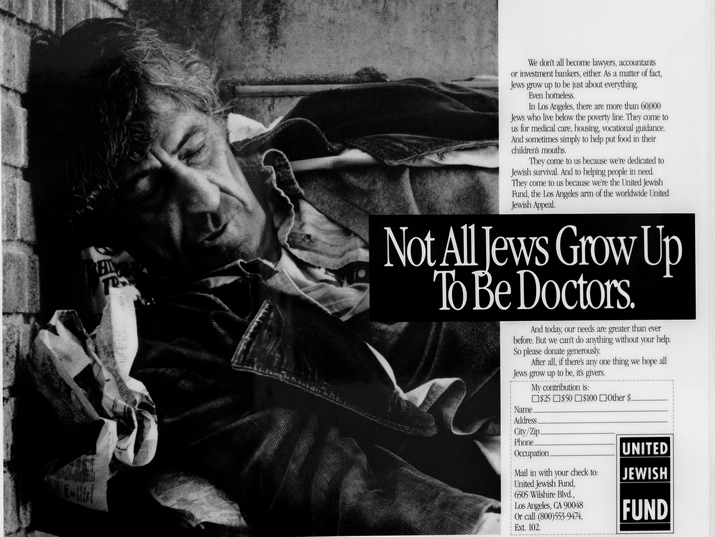 From the Gary Wexler Collection at the National Library of Israel

Can the story of a modern Jewish era be captured in advertising campaigns?  A generation later I realize that is exactly what we had accomplished. These campaigns are a creative and powerful window into the issues and actions of Jewish life at the time. They tell a story about our community in a medium, a creative one, in a way it has never been revealed before.

The storytelling began in 1988. It was two years before the 1990 National Jewish Population Survey in the United States revealed the 52% intermarriage rate that began to change everything— the way the organized Jewish community saw itself and focused its efforts. But we, a team of young Jewish advertising creative professionals, didn’t need the outcome of the survey to tell us what we already knew. Several of the young creative people in this group were married to non-Jews, themselves.

I was a creative director in ad agencies having won awards for work on clients such as Apple and Coca Cola. I was also active in the Jewish world. And this was the first time I had ever been asked to use my professional skills on behalf of the community. Jewish organizations, of course, expected us to be safe, not rocking any boats. But as young Jews and also as creative professionals, we knew we needed to take risks. Or the work would be dismissed and unnoticed by its intended audience—Jews who were not engaged in Jewish life. When people would ask me during this time what I did professionally, I would simply answer, “I find Jews.”

I never imagined the campaigns would one day become an archive at the National Library of Israel, a body of work that would live on in perpetuity for the Jewish people.

Clearing out my garage

Eighteen months ago, I was clearing out my garage to make room for the 1950s Lionel Electric trains that my father had set up for me, to now set them up for my grandchildren. I thought that alone would be my big emotional moment.

But while cleaning, I noticed the dusty portfolios of the ad campaigns I had created over the years. They were taking up a huge amount of room on the shelves.  I scratched my head, “Why am I saving them? For my kids to throw out after I’m dead? When my grandchildren discover that I wrote Coke jingles to help people rot their teeth, is this the legacy I want to leave them?”

I haven’t worked in advertising for a long time and I knew I would not be needing these portfolios to find another ad job (Besides, nobody in the ad biz hires people in their late sixties). And I certainly didn’t need to bring them to class and encourage my Millennial students in the Masters Program at the USC (University of Southern California) Annenberg School of Communication, to believe that this professor was living in the communication profession of the past.

Then I opened the portfolios of campaigns I created for the Jewish world, between the years of 1988- 2008. I hadn’t looked at it in over ten years. A twenty year era of Jewish life poured out in front of me. Campaign after campaign added another piece of a story of how the Jewish world functioned and engaged Jewish populations in its causes during this time.  I realized I was looking at something historic: campaigns about peace signings, terrorism, spousal abuse (the first time the community publicly admitted it, causing a controversial uproar), Jewish men dying of AIDS, religious and political tensions in Israel and how the Diaspora was lining up on different sides, the blossoming of the foundation world, the centrality of Jerusalem, the murder of Rabin, fundraising efforts, Jewish day schools and every other need and issue of the times.

I contacted my good friend, Naomi Schacter, the director of external relations and partnerships at the Israel National Library. She asked me to send photos. The Library responded within two days writing, “In fact this is very interesting to us,” and asked that I bring the portfolios to Jerusalem.  There were forty pounds of ads I had laminated over the years for preservation, which is how people in those years presented their work in order to be hired.  I didn’t let El Al take the portfolio out of my hands.  In June, I met, portfolio in hand, with the Library, specifically with Matan Barzilai, head of the archives department and Dr. Yoel Finkelman, the curator of the Judaica collection.  Person after person came into the room until there were about ten people from assorted departments.  I explained that in a time when digital and online communication is replacing traditional advertising and newspapers, a volume of creative print advertising work such as this will not again be produced in the Jewish world. The Library enthusiastically accepted the portfolio as an ephemera archive. They told me, “We have never before owned a collection like this.”  They then told me this archive will be among the works of people such as Gershom Scholem and Naomi Shemer. I had no idea what “ephemera” even meant, and I’m not sure I yet do.

“Marketing is too commercial for the Jewish world”

In the mid-1980s when I began this venture, it was a struggle to bring my marketing and advertising creative expertise, along with an intimate knowledge of Jewish life, into the organized Jewish community. At the time, almost no nonprofits believed in marketing. I was admonished by several prominent Jewish lay leaders telling me, “Marketing is too commercial for the Jewish and nonprofit world. It is crass. It demeans what we do.” But I was unrelenting in my persistence, and eventually broke down the resistance, establishing Passion Marketing and growing it to twenty-five professionals. Passion Marketing, the company I eventually created became the go to place for Jewish organizations in America, Canada and Israel, creating over one-hundred campaigns for Jewish and Israeli causes, while also delivering marketing, communication and creative training to thousands of professionals and lay people.

Breaking down the resistance

The first crack in the wall of resistance appeared in 1988 with CAJE (Conference on the Advancement of Jewish Education) held in Jerusalem and attended by hundreds of Jewish educational leaders, donors and professionals from North America and Israel. At the time, I was serving on the board of the Bureau of Jewish Education in Los Angeles. I had been constantly advocating for marketing and advertising as the way to recruit students and build a donor population for Jewish schools. Finally, I was asked to make a presentation on the marketing of Jewish education at CAJE.

I threw myself into the opportunity. I was creative director for an ad agency where there were thirty-five people in the Creative Department. Among them were five Jews, Sharon Rich, Moira Schwartz, Rick Rosenberg, Colin Shubitz and Aram (today Ephraim) Tabackman. I pulled them all together one night after work and explained I would be going to Jerusalem to make an ad presentation aimed at Jews just like them——non-involved in Jewish life (except for Aram)—-trying to convince them to send their kids to some form of Jewish education. I told them I would write the strategic creative brief but really wanted to see what ads they would create to target people like themselves. They enthusiastically agreed.  However, the first and last ads in the campaign I created myself, in order to set the tone for the kind of creative depth I wanted them to reach for and touch in the target audiences. 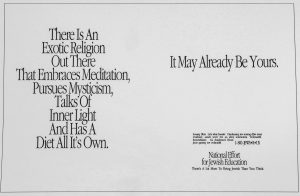 The ads spark an uproar, a controversy, and an embrace

Sessions at the CAJE conference had on the average thirty people. I walked into the room for my presentation and there were hundreds, sitting, standing in the hallways, crowding into the doorways. I realized at that moment people knew it was time for a new approach and believed that marketing may be the answer.  I showed the work on a big screen. The room erupted. There were people who loved the bold truths, the resonance and what was currently happening in the Jewish world. And there were those who were incredibly offended and shocked, denying the realities of the day and wanting to cling onto the Jewish world as they believed it should be.

It was exactly the reaction I was hoping and prepared for. It led to the real conversation I wanted to have in that room. Advertising in the Jewish world, I believed, needed to the bold and shocking. If we spoke to our audiences only with the safe things we wanted to say, that made us feel good, our audience would not listen. We’d be talking to ourselves and the audience we so badly needed would not be paying attention. We had to be honest about the realities we were facing and show the target market of uninvolved Jews that we understood who they were. For twenty years, this conversation regarding many issues, convincing Jewish organizations and particularly lay people to take risks when promoting Jewish life, remained my biggest battle. 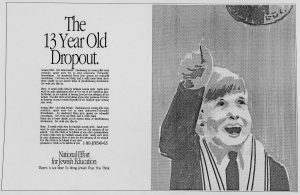 I had no idea that a Jerusalem Post reporter had been present and the next day the entire campaign would be the lead article in the Jerusalem Post with the headline, “Can you sell Judaism like toothpaste?”  It was picked up by the Jewish press in the US and Canada. And my twenty year advertising journey into Jewish life began. 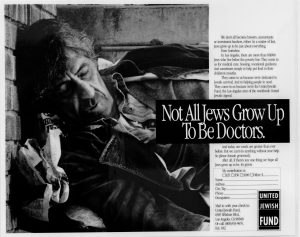 Tell us what you think

Over the next few months, the Library will feature several of the campaigns. I will tell their stories, the reactions to them and whether they actually achieved their goals. One of the most startling discoveries I made when reviewing the collection is that many of the same issues that became the subject of several campaigns years ago, are still the issues today. The delivery system of communication through technology may have changed, but many of our issues as Jewish people have not. I and the Library will be extraordinarily interested in your reactions to how we promote Jewish life today and whether our issues will ever change. Advertising, as a medium, belongs to everyone. And everyone has an opinion. Tell us yours.  I don’t think any of you will be shy.

The Hebrew Women of His Majesty’s Armed Forces

Was This Ad Published by Franz Kafka in a Zionist Newspaper?