One of the greatest Jewish philosophers of all time? Or a heretic? The story of Baruch Spinoza 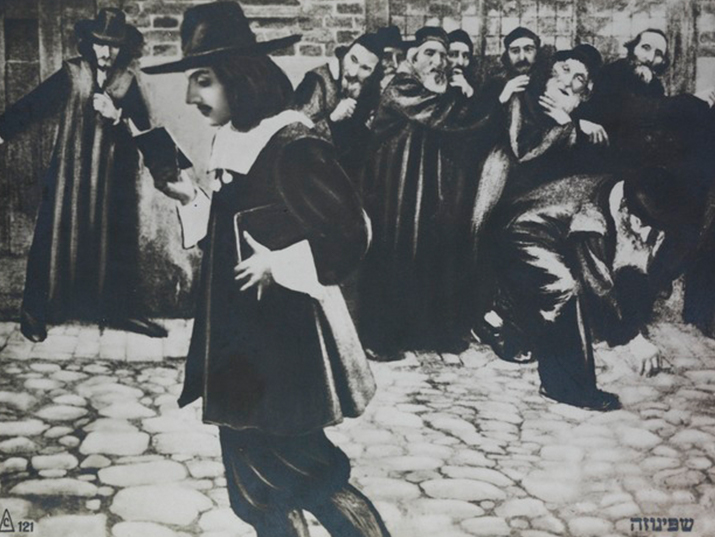 A postcard featuring the painting "Spinoza" by the Jewish painter Samuel Hirszenberg, 1907. Spinoza is pictured walking away dejectedly after the expulsion from the Jewish community was imposed on him

On July 27th, 1656, an unusual entry appeared in the community ledger of Amsterdam’s Portuguese Jews – a decree announcing the excommunication of a 24 year-old Jew by the name of Baruch Spinoza. The writ of expulsion read:

The Senhores of the Mahamad make it known that they have long since been cognizant of the wrong opinions and behavior of Baruch d’Espinoza, and tried various means and promises to dissuade him from his evil ways. But as they effected no improvement, obtaining on the contrary more information every day of the horrible heresies which he practised and taught, and of the monstrous actions which he performed… they decided… that the same Espinoza should be excommunicated…

But you who cleave unto the Lord God are all alive this day. We order that nobody should communicate with him orally or in writing, or show him any favor, or stay with him under the same roof, or within four ells of him, or read anything composed or written by him.

It is not clear when exactly the young Baruch Spinoza decided to begin questioning the religion of his forefathers, but it likely happened at an early age. While regularly attending synagogue and keeping the mitzvoth, Spinoza developed his philosophical and theological ideas through an intense study of the Torah. The more he read, the more aware he became of the many contradictions contained within the holy text. As described in his Theologico-Political Treatise, Spinoza concluded that the Torah’s laws were valid, but only in the political framework established by the ancient Hebrews in the Land of Israel. He claimed that these laws often contradicted the laws of nature as they were understood in Spinoza’s time.

Spinoza did not abandon faith in the Eternal, but rather placed the Eternal (that which is divine) within the realm of this world. Spinoza’s God (in contrast to the Judeo-Christian view of God) is not an independent entity, separate from the universe. Spinoza’s God is the universe. In this philosophy, Spinoza developed the foundations of a discipline that would later come to be called “Biblical Criticism.” He created (perhaps for the first time in history) a critical and historical interpretation of the Tanakh, the Hebrew Bible. His interpretation abandons many traditional understandings in favor of using logical and scientific methods to understand the text.

Even in the relatively liberal and enlightened atmosphere of Amsterdam, Spinoza (a descendant of the Portuguese conversos) was disowned by his community. These victims of the Inquisition, descendants of forced converts to Christianity, were now working to bring those of Jewish descent back to their original faith. They saw the words and actions of Spinoza as a threat the delicate fabric of life they had worked so hard to cultivate for themselves. Baruch Spinoza was forced to find a new place in society as a faith-less citizen and philosopher. Historians would later come to refer to him as “the first secular Jew.”

Throughout the generations, the Jewish people have had a complex relationship with the figure and writings of Baruch Spinoza. In his lifetime, he was forced to communicate his teachings to his few students in abbreviated, discreet form. He published his public writings anonymously, but his most far-reaching book, Ethics, was discovered in a drawer in his home following his death.

For hundreds of years, Jews continued to reject Spinoza and his ideas. Even after he died and his offenses against the Portuguese Jewish community were long forgotten, his ideas were regarded as heresy and an intentional harassment of the basic tenets of Judaism. For more than a century Spinoza’s name was shunned, not to be mentioned in public circles. It was the great thinkers of the Enlightenment who first began to turn the tide in favor of some of the ideas of the “heretic”.

The First Signs of Support for Spinoza

With the rise of European Enlightenment, Judaism came under assault from an unexpected direction. In addition to the traditional Christian condemnation, which denounced the Jews for rejecting their Messiah and continuing to adhere to an outdated set of religious edicts, the Enlightenment philosophers also began to condemn the Jews for refusing to abandon their religion and integrate into the modern, rational world that the Enlightenment sought to establish.

Spinoza was rebranded by these thinkers as a martyr of the Enlightenment, a victim who had bravely defied the rabbinical establishment of his time in an attempt to bring about change from within. Most chose to ignore his overall undermining of the fundamentals of religion: the abandonment of the idea of revelation, the belief in the statute of limitations of religious law and his identification of the universe itself with God. But as stark opponents of the Hasidic movement, they strongly embraced Spinoza’s rejection of the mystical dimension of Judaism.

The well-known Hebrew writer and intellectual, Mordecai Zeev Feuerberg, treated the rejected Jewish philosopher with great respect and harshly denounced his own people for Spinoza’s poor treatment at their hands. He even went on to draw parallels between Spinoza and Immanuel Kant.

The image of a rogue rebel who stands for what he believes is right, even in the face of immense pressure, was precisely the example that the Zionist movement sought out for its leaders and messengers. Spinoza fit this narrative well.

It seems this was the declaration many had been waiting for in the Land of Israel. Spinoza began to appear as a subject of research and debate in dozens of articles and books. In 1932, Yehoshua Yehuda Cohen wrote in the pages of Doar Ha-Yom that “it is impossible to say that we do not now relate to Spinoza with all due respect.” Cohen tried to make clear that even though Spinoza had come to be regarded with far greater acceptance than was afforded to him by the Converso community in Amsterdam, his writings should still be read in a critical and careful fashion – just as Spinoza himself had read the Jewish scriptures.

In 1951, a handwritten, original copy of Spinoza’s Theologico-Political Treatise was brought to Israel. It was Prime Minister David Ben-Gurion who took the importance of Spinoza’s contribution to new heights when he wrote an article in Davar in 1953, stating that it was the duty of Israeli citizens to return “to our Hebrew language and culture the original writings of the most profound philosopher to have risen up among the Hebrew people in the last two-thousand years.”

Today, no work that aims to survey the history of Jewish thought can be considered complete without a mention of “The Philosopher’s Philosopher” – Baruch Spinoza.

The Jewish Gangster Who Founded a Gambling Desert Paradise