The Mehitza and Separation in the Age of #MeToo

Photographer Myriam Tangi on her ground-breaking photographic essay, "Mehitza: Seen by Women", which began in 2003 and spanned multiple continents 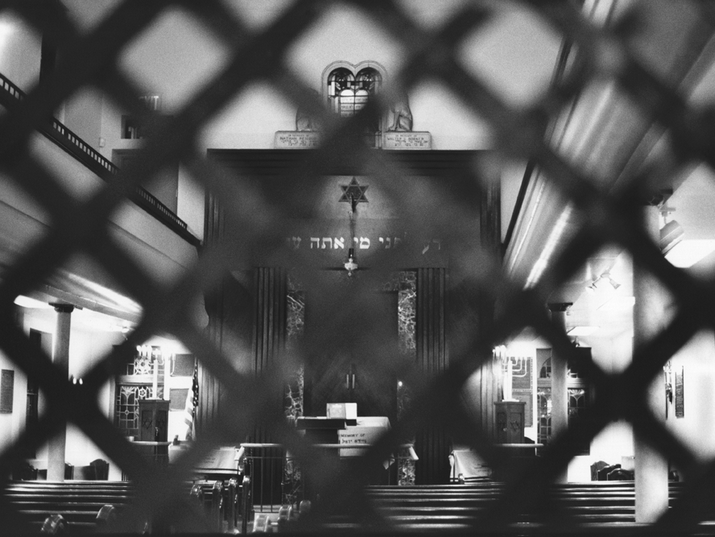 When I began my photographic essay, “Mehitza: Seen by Women” (a mehitza is the physical partition placed between men and women in a synagogue), I was well aware of being a female photographer in a Jewish sacred space and I was filled with enthusiasm. Women are only rarely permitted to examine and reveal the inner workings of a synagogue. It was revelatory to me and perhaps revolutionary to worshippers to dare to take a camera into the inner-sanctum of Jewish women’s devotion.

This project began in 2003, in response to an emotional shock I received when viewing a series of six photos, taken from 1982 onwards. I suddenly realized how physically distant I was from the centrality of worship, traditionally led and directed by men. In that moment, I decided to explore the female perspective – a point of view and experience unknown and, often unrecognized and undervalued by men. The aesthetic challenge was how to photograph this separation architecturally, ritually, and emotionally – a photographic essay as an artistic vision, not a documentary project. I set out to ask the question: In what ways do distance and a limited view of the central point of worship influence women within the synagogue structure, spiritual experience, and community?  How could my camera provide a window into the feelings and experiences of women standing behind the mehitza? In its essence, “Mehitza: Seen by Women” offers a new perspective and contributes to studies on religion and gender by questioning male and female territories while unveiling another layer in the complexity of contemporary Judaism.

The project also represents a spiritual photographic journey that has been ongoing for seventeen years now and is still a work in progress. Below are a number of questions I would like to put forward which were raised after the exhibition went on display at the Museum of the Art and History of Judaism (MAHJ) in Paris and after a book was published in 2016 in Jerusalem.

First, however, I would like to clarify my position as a Jew – born in Paris, I grew up in a Sephardic and traditional family – I do not consider myself orthodox, nor reform, nor conservative, but rather a Jewish woman who follows halacha (Jewish law) while questioning preconceived notions and giving expression to my own creative vision as an artist who is deeply invested in the subject. “Mehitza” gave me the opportunity to investigate the roots of Judaism, in an attempt to reconnect to its Hebrew origins, as well as to explore the new Jewish identity being developed in Israel, all the while maintaining the centrality of the principle of Torah as a revelation (Written and Oral), the essence and heart of Judaism.

And now, to the questions. How do we avoid extremism when considering and reconciling the eternal nature of Jewish Law and the reality of women’s place in modern society? Men must also reconsider their own place in this respect, and allow women to find a place of their own, in which they are treated fairly. This is not only a question for women, of course.

Why do men and women come to the synagogue (“the little temple”, “the gathering house”)? How do we create a place where the dualistic desires, that of God and that of the human being, meet, where we voluntarily offer the best of ourselves, echoing the essence of the divine order, for Him?

Another question raised by “Mehitza”: Why were women forbidden from leading services in the time of the Temple? From a certain perspective, this is not only a question of gender since most Israelite men (aside from the Kohanim and the Levites) were forbidden from performing the priestly services as well. So what was the core reason for the barring of women from leading services in the Temple?

Was it the matter of the female voice (kol isha)?

The issue of women mixing with men? (Tradition claims that the first mehitza was installed during the Second Temple era because of inappropriate behavior inside the Temple during the celebrations of Simchat Beit HaShoeiva).

Is it that women have no need of this function in order to maintain a connection with the community? – Perhaps a lack of time, due to the demands of domestic duties and children ?

There is no prohibition on women holding Torah scrolls during menstruation, so it seems this is not a question of purity/impurity.

Is the beit knesset (synagogue) a special place, with a different status than other gathering places such as theaters or public halls? If this is so, what is the purpose of the synagogue? Is it a place for social interaction? A place to connect with the divine? (The two are not necessarily contradictory…) What does this connection require?

A few years into my photographic essay, it became clear that the concept of the mehitza (in order to be clearly understood) should be divided into two main aspects: the notion of separation (which is linked to the concept of kedusha – “holiness”) and the place of this separation.

The Hebrew root k-d-sh is the source of the words kedusha, kaddish (a hymn of praises to God) and kiddush (the blessing recited over wine), among others. The different variants of the root are mentioned 648 times in the Torah and 4180 times in the Zohar.

The link between the concepts of separation and kedusha is mainly rooted in Leviticus 19:2 – “Speak to the entire congregation of the children of Israel, and say to them, You shall be holy, for I, the Lord, your God, am holy” – God, through His absolute transcendence (and immanence), is separated. His “separation” is seen as an example to follow, with the goal of achieving holiness, and becoming more like Him. After all, Genesis 1:27 repeats how man was made “in the image of God”, twice: “And God created man in His image; in the image of God He created him; male and female He created them.”

Regarding the place of the separation: It is important to remember the basic halacha concerning the mehitza: men are forbidden from seeing women – but women are supposed to see everything. When considering the state of many synagogues since the destruction of the Second Temple, it seems evident that the second half of this halacha has not been properly implemented. For some 2000 years, these halachic instructions were disregarded.

How can we thoroughly re-imagine the ezrat nashim, the women’s section of the synagogue, as this place is perceived by many women as a place of inequality and discrimination?

Today, more and more orthodox synagogues in both Israel and the United States separate the synagogue with a mehitza perpendicular to the axis of the heikhal and the bimah, so that the congregation’s women are hidden from the men’s view, while the women are able to see and hear the entire service – in equal proximity.

During my exhibition at the MAHJ (which ended in January 2016), many visitors told me that because today’s men are different, due to progressive trends in modern society, we shouldn’t have any more need of a mehitza…Then, in 2017, #MeToo came along.

The effects of this movement have swept across our modern world like a tsunami, bringing necessary changes and a greater sense of “equality” between men and women – But what have we (re)discovered since #MeToo? Today’s men are perhaps not as different as we thought when it comes to questions of desire and sexual relations, which are relevant throughout the various sections and levels of society.

As a consequence, perhaps we need a solution which provides a fair and equal separation in the synagogue. The “Mehitza” project serves as a platform to rethink and renew  the question of a space in which both men and women can feel comfortable, equal, and free from distractions of a sexual nature – a place to which we come specially, to gather together for a moment in God’s holy presence.

Why not restore some equality in light of God’s will regarding kedusha (holiness)?  Modern-orthodox synagogues have begun to take on this challenge.

Judaism contains all the answers which can enable a harmonious reconciliation of both modern and eternal values when it comes to questions concerning the complementary equality of men and women.

If you liked this article, try these: A Memory of the Last Jews of Yemen In Color: Photos of Libyan Jews Brought to Life In Color: Amazing Photos of Jews and Muslims in the Holy Land From 1900