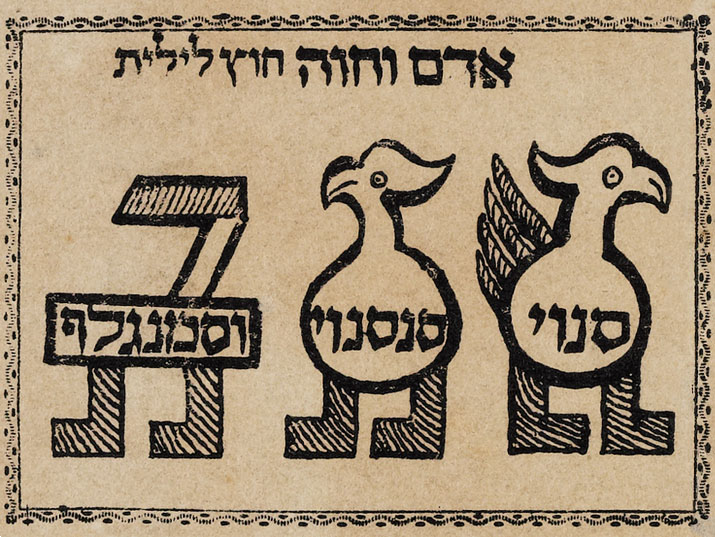 The quest for a proven, functioning magical amulet, one whose supernatural powers can be trusted with certainty, has led buyers to prefer amulets ordained with fixed and familiar mystic formulas. Since the most common Jewish amulets known to us are those designed to protect women giving birth, we can safely assume that the three angels who appear on these types of charms are among the most common figures associated with the Hebrew amulet. Their names are Senoy, Sansenoy and Semangelof.

What is the origin of these three angels? In rabbinic literature, incorporating over 1,000 years of writing and interpretation, we find the names of several satanic figures that developed over time, each of them constantly trying to establish evil’s grip on the world. First among these Talmudic demons is Samael, often referred to euphemistically as Sitra Achra – “The Other Side”. He is considered to be the wicked Esau’s demonic master, and in Talmudic literature most of his evil deeds involve attempts to undermine the righteous.

Since the end of the Talmudic period, Samael has often been portrayed as the source of all evil; his agents charged with defeating the cause of good and righteousness. His main partner is his wife, Lilith. This monstrous couple was apparently first brought together in the 13th century, their combined powers allowing them to rule the realm of impurity.

In Jewish mythology, Lilith is believed to be Adam’s first wife, who was banished before she was able to bear his children. In a desperate attempt to take revenge on Adam and all his offspring, Lilith devotes her efforts to harassing newborn children and their mothers. Two main roles are attributed to this demoness: strangling young children in their sleep, and seducing men – Lilith becomes pregnant with this wasted sperm, giving birth to demonic stepchildren. At this point, the three angels enter the picture.

In the 10th century text known as the Alphabet of ben Sirah, we find the story of Adam and Lilith. Adam’s first wife is described as having been created from dust, just as he was, “and therefore,” argues scholar Joseph Dan, “she saw herself as his equal in every aspect.”

How was this sense of equality manifested? Lilith believed she could leave her husband, and as he refused to “accept this decree of equality in their sex life” – apparently meaning that Lilith wished to be on top of her husband during intercourse, “she fled from him and escaped.”

The angels who were sent to return the woman to her husband were Senoy, Sansenoy and Semangelof. The three failed in their mission; Lilith claimed that “the great demon has already come upon her,” referring to Samael, and could therefore no longer return to Adam. The angels were able, however, to extract a vow – that Lilith would not harm the offspring of Adam and his second wife, Eve.

This promise is the foundation of the famous amulet used to this day by women following childbirth. The three angels were made popular by the Alphabet of ben Sirah, while the illustrations of their images in various amulets also contributed to their fame.

Eli Yassif, who studied the medieval stories of ben Sirah (or ben Sirach), claimed that the custom of writing amulets with the names of the angels dates back even earlier than the 8th century, its story intended to explain an existing custom. The same goes for the story of Lilith as the first woman, and her escape from Adam. It seems these tales were known even before they appeared in the stories of ben Sirah.

The angels’ very names – Senoy, Sansenoy and Semangelof – are seen as safeguards against Lilith’s actions. The amulets contain written text featuring the names of the angels as well as graphic motifs of their images. There is also a threatening vocal motif involved, emanating from the onomatopoeic sound of the names said together, which resembles sounds found in nature, like the hiss of a snake or the crackle of fire. The sound warns Lilith and gives her pause, making clear that she should not approach the mother and her newborn children.

The repetition of these sounds (sen-san-sen-sem) enhances the whip-like, whispering, threatening effect.

The names Senoy and Sansenoy are mentioned several times in first century Hebrew texts and they can also be found on an incantation bowl discovered at Nippur in modern-day Iraq. On an incantation bowl kept at the National Library, which was inscribed in antiquity, long before the ben Sirah stories of the Middle Ages, we find the same narrative which appears on amulets protecting new mothers. On this bowl we find a text written by the author Duchtish Bat Bahrui, describing a character named Smamit, the mother of twelve sons who were killed by a brutal demon named Sideros. Smamit escapes the demon and flees to an isolated mountain where she builds a fortified home. Four guests protect Smamit from the demon; the names of three of them are Soney, Sosoney and Senigly. Though the names are not completely identical, the same whispering, threatening motif can be heard here as well.

In Christian versions of similar amulets, the assisting forces are saints. Etymologically, we can trace the changes in the names of the angels/saints which have evolved over the years and which have been modified to suit any culture that embraced them. Senoy became Saint Sisoe, Sansenoy became Sisynios and Semangelof appears as Synidores.