Home > Haggadah > These Passover Haggadot Will Leave You Speechless
Judaism

The Haggadot collection at the National Library is the largest in the world and we've collected them here in a special online exhibition. 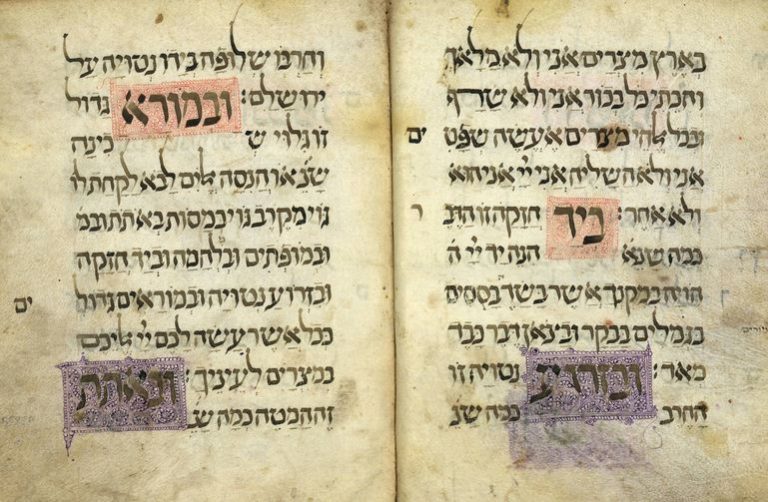 The styles and wording of the modern Haggadah expand on the traditional versions, with various levels of interpretation and innovation. On the one hand, many Haggadot include additions, especially at the end, while others are seen as a platform for the expression of certain ideas and as a place to include informative and humorous anecdotes. The additions are varied, ranging from recognized Hebrew songs and melodies to original independent pieces. Many Haggadot produced in Israel include illustrations by some of Israel’s greatest artists.

In 1938 this Haggadah was confiscated by the Nazis from the Jewish community in Berlin. The Haggadah was transferred to Warsaw and disappeared in 1948. It reappeared in 1989, in Geneva. It was only after a long and difficult court battle that lasted four years that the Haggadah was returned to Poland and eventually donated by the Prime Minister of Poland, Włodzimierz Cimoszewicz, to Prof. Israel Shatzman, director of the National Library, in a formal ceremony with the Speaker of the Knesset, Dan Tichon. The Wolff Haggadah is one of the oldest in existence. It was inscribed on parchment, and was most likely written in Avignon, but in the tradition accepted in Northern France. The owner and copier of the Haggadah was Yaakov ben Shlomo Tzarfati, whose writings we have preserved to this day. 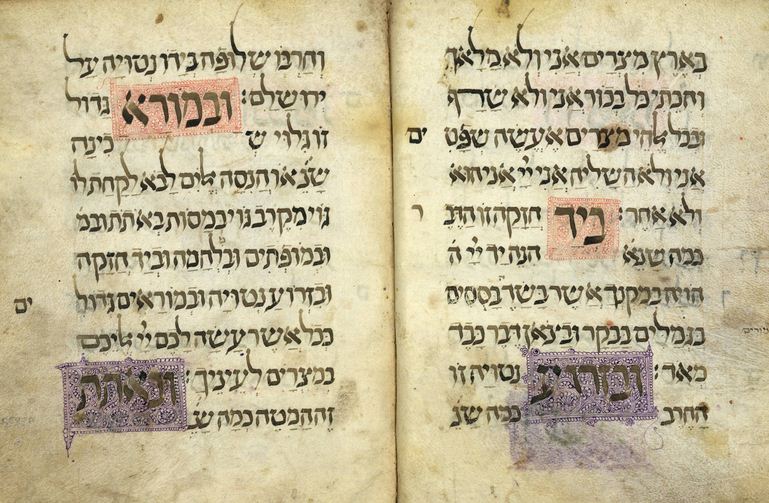 Rothschild Haggadah, Northern Italy, from around 1450

Called the “Rothschild Haggada” because it was owned by the famous family of Jewish benefactors until 1939. During the Second World War, the Haggadah was stolen by the Nazis and disappeared. After the war it was purchased by Dr. Fred Murphy, a graduate of Yale University, who bequeathed it to the university in 1948. In 1980 the Haggadah was identified as the property of the Rothschild family and returned to its owners, who donated it to the National Library of Israel. The Haggadah was missing three pages that were probably already torn prior to its purchase by the Rothschild family. Recently two of the pages were found at a public auction and purchased by the National Library with the generous help of two anonymous donors. 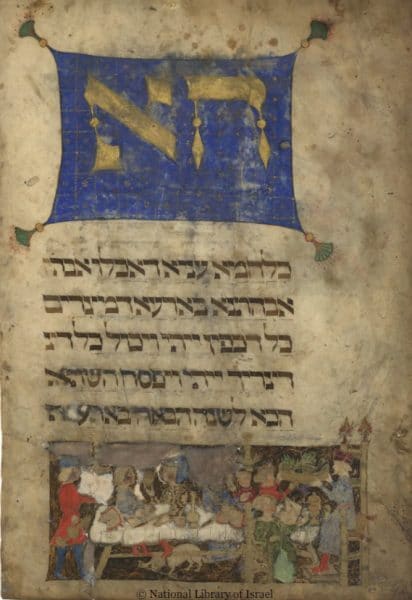 A Haggadah from Guadalajara, Spain, 1480

This is the earliest printed Haggadah, the only copy in the world. The text is printed in quadratic, unpunctuated letters. The Haggadah, printed 12 years prior to the exile of the Jews from Spain, is unique evidence of the high technological level of printing among Spanish Jews. With the exile, the Jews took this knowledge with them to their Diaspora communities in Europe and areas of the Ottoman Empire, among them northern Africa. 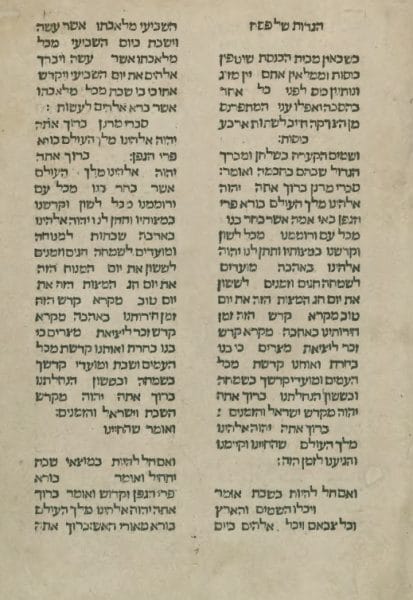 This is the earliest complete illustrated Haggadah. It includes short interpretations in the pages’ margins. Although the Haggadah does not include Echad Mi Yodeah or Chad Gadya, it made a lasting impression on generations to come, as its illustrations served as a model for many Haggadot printed later on. 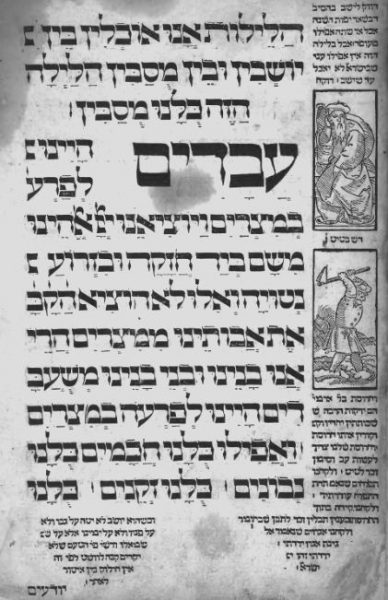 A Haggadah from Amsterdam, 1695 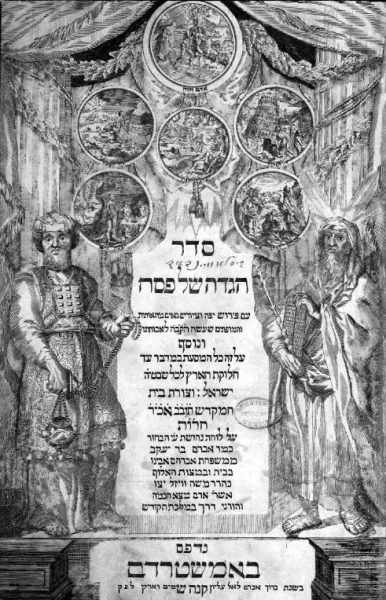 This is most likely the first Haggadah to have been printed in America. It includes an English translation by David Levy from London. The Haggadah is written “According to the Custom of the German & Spanish Jews”. The English translation appears alongside the Hebrew, with slight clarifications. Chad Gadya and Echad Mi Yodea are not translated to English. 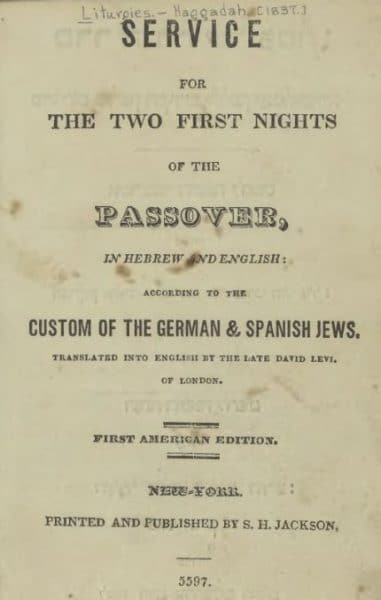 A humorous Haggadah from Jerusalem, 1923

Written by the teacher, translator, and linguist, Kadish Yehuda-Leib Silman (1880-1937), who was one of the founders of Tel-Aviv and the Beit-Hakerem neighborhood in Jerusalem. The Haggadah deals with life in the Hebrew communities of the Land of Israel in a humorous tone: The wise one is the High Commissioner; the evil one is the Arab Higher Committee; the veteran settlers are represented by the shy one, and the one who knows not how to ask is the young generation, “that will not talk a lot, but will do a lot, will grow and glorify Israel”. 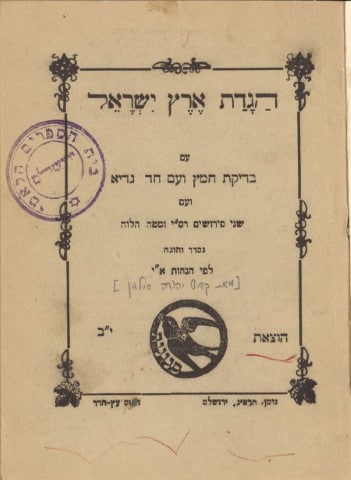 A satirical Haggadah from Tel Aviv, 1934

The “Tel-Aviv Haggadah”, a satirical version of the Passover Haggadah, illustrated by Aryeh Nevon. Published in honor of the 25th anniversary of Tel-Aviv’s establishment, during Passover 1909. The Haggadah depicts the atmosphere of life in the first Hebrew city and mentions several central town figures in the text itself. 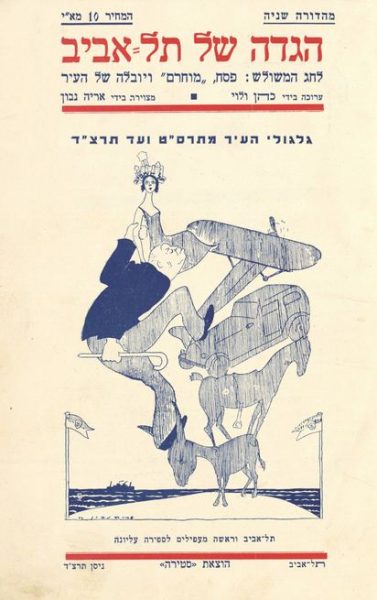 A Haggadah prepared by the “Hebrew Transport Unit” (Yael) of the Jewish Brigade, 1942.

During Passover of 1942, the unit was stationed in Egypt, on the shores of the Red Sea. The Haggadah makes reference to the symbolism of the location and praises the role of the soldiers of the Jewish Brigade as Hebrew representatives in the war against the Germans in North Africa. The Haggadah also refers to the bravery of the Brigade soldiers during the German siege on Tobruk in Passover 1941. Various literary texts mostly dealing with war were added to the traditional texts of the Haggadah. 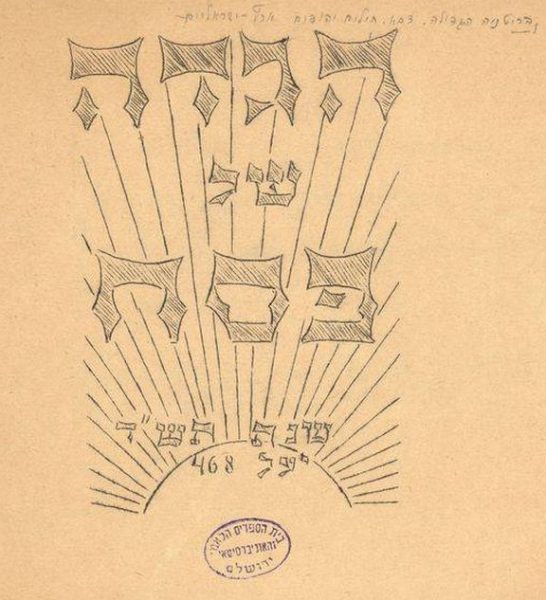 The first Haggadah produced by the Hashomer HaTzair (“The Young Guard” – a socialist-Zionist youth movement) and intended for use in the movement’s kibbutzim. The Haggadah refers to the Holocaust, the war, and the Hebrew community’s struggle against the British. The Haggadah reflects the destruction and the loss of the homes of the previous generation, and the need to hold on to the only home left. Current events of the world and of the region, as well as the story of the Exodus from Egypt, are all displayed in the Haggadah in service of the movement’s ideology regarding the battle of the classes, liberation from slavery, and the values of the Hebrew pioneer. “There is hope still that Israel will return from the house of slavery and attain resurrection in the Spring of Nations.” Written and edited by Mordechai Amitai, decorated by the painter Ruth Shlos. 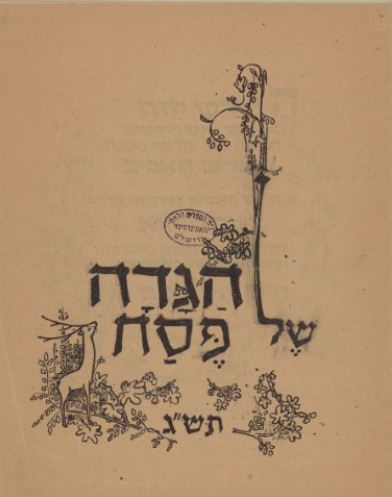 A Haggadah prepared by the Palmach‘s 3rd Battalion,1948

The 3rd Battalion of the Palmach (the elite fighting force of the Haganah, the precursor of the Israel Defense Forces) was active in the Galilee from the outset of Israel’s War of Independence. Passover of that year was spent fighting a difficult battle over the stronghold at Al-Nabi Yusha’. Following Passover the battalion’s soldiers conquered the fortress. The Haggadah is written under the infuence of these difficult battles and deals with the fragile state of the Jewish population in the Land of Israel on the eve of the establishment of the State, at one of the breaking points of the War of Independence. 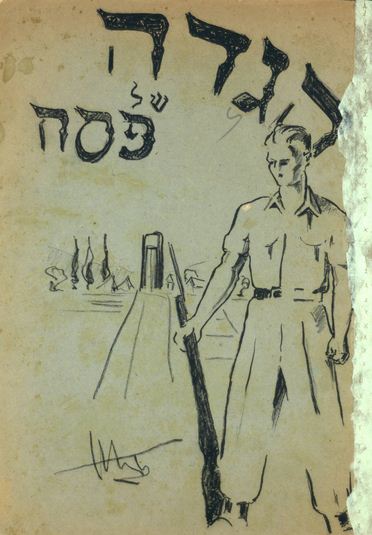 A Haggadah from Kefar Shemaryhau, 1948

A local addition to the Passover Haggadah, written by residents of Kefar Shemaryahu, Yekes (German-Jewish immigrants to Israel) and their offspring, expressing remorse over their assimilation and telling the story of Kefar Shemaryahu and the period, including the early days of the War of Independence. “We were free – we the present-day residents of Kefar Shemaryahu – in the land of Ashkenaz. Traders, lawyers, doctors, writers, and artists… but we did not guard our vineyards, and we neglected the ideas of our nation and its traditions. We attended the schools of foreigners. We did not know the language of our nation, and we forgot the Holy Books of the People of Israel…” 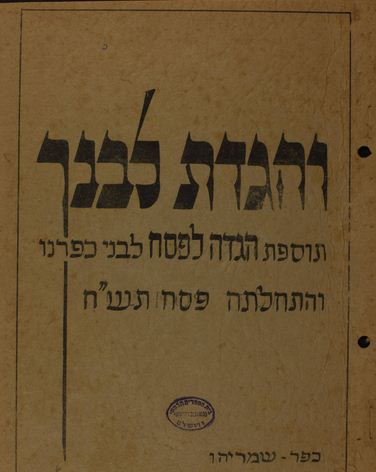 A Haggadah from Ma’ale Hahamisha, 1948

This Haggadah was written only a few days after the conclusion of harsh battles over the “Castel” fortress near the entrance to Jerusalem during the War of Independence. Soldiers in the Portzim Battalion of the Palmach from Ma’ale Hahamisha took part in the battles. Many of the fallen soldiers were buried during those very days. The deep feelings of loss are evident in the text, which also stresses the importance of devotion to the battle over the establishment of the State. 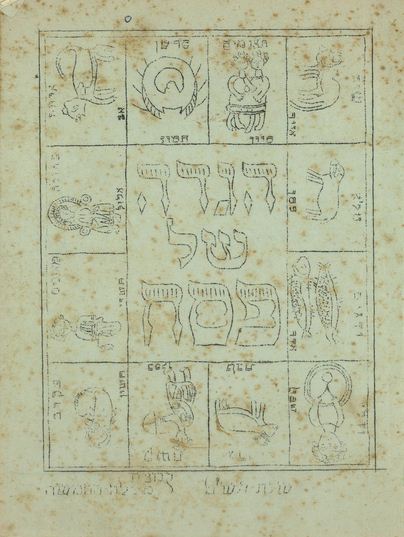