Graffiti in Budapest: The Mystery of Renée Nadler

A young girl, her soccer star brother, tragedy and the unknown 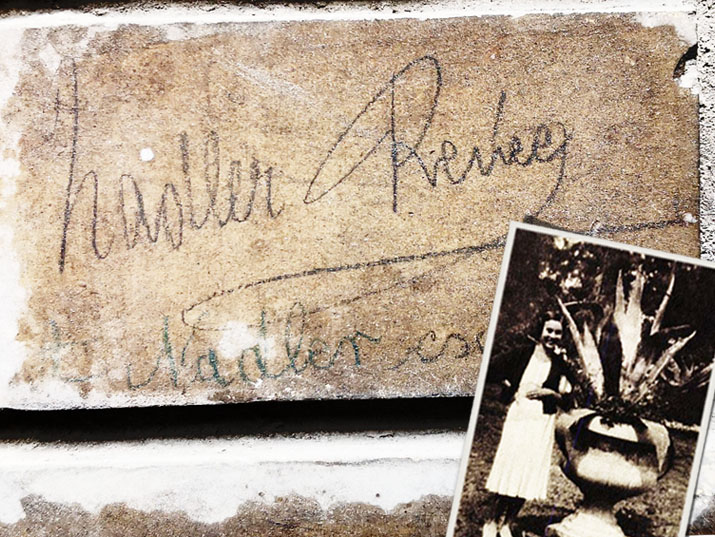 In June 2018, I started a project called “Budapest Téglái” (“The Bricks of Budapest”) to document old graffiti on the walls of Hungary’s capital. People used to write their names, sometimes dates and even short stories on the buildings in which they lived, worked or even just passed by, often offering enough information to identify them and begin exploring their stories. These prewar works of graffiti left written on the walls of Budapest are my favorite signs from the past to discover.

One of my favorite spots to find old graffiti is the Anker Palace (Anker-palota in Hungarian), a huge building located in Terézváros, the 6th district of Budapest. The Anker Palace was designed by the architect Ignác Alpár and built in 1908. Many Jews bought or rented flats in this huge building located in the center of the city. Of the people who lived there before the war, the most famous was probably Léopold Szondi, the psychiatrist who developed the Szondi test and fate analysis.

When I see this old graffiti, I always wonder about who the people were who wrote it and what happened to them. During my last visit to the Anker Palace, I found graffiti left by a girl called Renée Nadler who used to live there.

I did some research using various databases and I managed to find some information about her. Like many of the Anker’s inhabitants, the Nadlers were Jews. Her father, Izsák, made and sold suitcases and passed away in 1935. Her Mother, Roza Acht, was the daughter of Lazar Acht, a tailor from Lemberg (today Lviv in Ukraine) who settled in Budapest in 1902. Renée had 6 siblings: Gizella, Emma, Rozalia, Henrik, Illés and Bertalan.

I found a picture of Renée in an old Hungarian magazine called Szinházi Élet from 1932 where she sent her greetings from the town of Héviz to her friends in Pest:

Renée had a brother called Henrik. His nickname was “Pubi” and he was a famous football (soccer) player on the MTK football club, with whom he became a 7-time Hungarian champion. The MTK used to be considered to be a “Jewish football club” since most of its founding members and players were Jews. The team still exists.

Tragically, Henrik was murdered in May 1944 either as a forced laborer in Austria or at the Buchenwald concentration camp. He was not the only MTK football player to be murdered; József Braun, Antal Vágó and Imre Taussig were also victims of the Holocaust.

Renée was very interested in football and she was a supporter of MTK where her brother played. The Sporthirlap newspaper, which specialized in sport, reported on how Henrik, Henrik’s wife and Renée had some passionate debates about the performances of certain football players while riding the 38 line tram in June 1933.

Henrik’s murder was not the only tragedy to strike the Nadler family. Renée lost a second brother, Illés Nadler, who was also murdered during the Holocaust. Renée’s sister, Gizella, wrote to all leading Hungarian newspapers in 1945 in order to find more information about Henrik and Illés’ fates.

Unfortunately, I could not find much information about the fate of Renée. It seems that she probably survived the Holocaust and married a man named Árpád Weisz. Her husband was a leather trader and he changed his name to “Varga”. They apparently left Hungary and settled in Israel or the United States.

It is incredible to see how simple graffiti written by a little girl in the 1920s helps us explore the past and honor the memory of people who where murdered and suffered during the Holocaust. Unfortunately, this old graffiti is endangered, with much of it disappearing when the buildings are renovated. I do my best to document it while we can, posting the results of my research on the Budapest téglái (in Hungarian) or Buildings Tell Tales (in English) Facebook pages.

Anyone with information about Renée or the rest of the Nadler family is invited to email: [email protected]