When Israelis Stood in Line for Rations

Lines, food shortages and powdered eggs. The coronavirus crisis recalls the early days of the State of Israel, when a policy of austerity was put in place 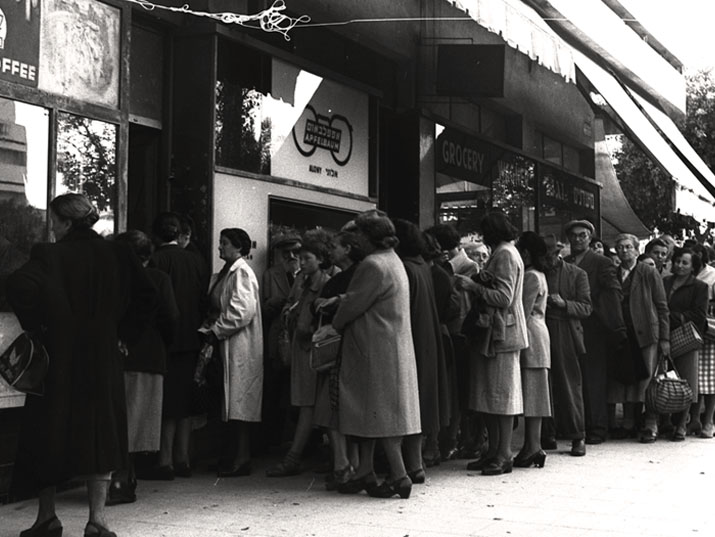 The word “austerity” has become quite commonplace over the past 15 years or so, especially in the financial press. It made its great resurgence during the global economic crisis of 2008 as well as the European debt crisis that followed. The Hebrew word for austerity – tzena – carries somewhat different connotations for many Israelis. Some of our readers may have heard of the “Tzena Era” during the State of Israel’s early years, but aside from a few strange references in local cult films, what do we really know about this period? We poked through the National Library archives to bring you some of the sights – and flavors – of austerity-era Israel.

During the first full decade of the state’s existence, the Israeli government installed an economic policy of austerity – tzena. However, when used today, the term usually refers only to the first few years during which the policy was implemented, when its influence was extremely noticeable. Although the policy included economic measures in many different fields, the most memorable aspect today was the rationing of food. Prices of food products were regulated and monitored, and citizens were allowed to purchase only limited amounts of food, which they received in exchange for coupons.

In fact, rationing expanded to products beyond food, such as furniture and clothing. Israeli companies, such as “Lodjia” and “Ata” produced clothes that were distributed in exchange for rationing coupons, and set the tone for the little country’s fashion trends during the 1950s.

And now for a paragraph on extenuating circumstances: at the time, the Israeli government was not the only government in the world that decided on a regime of austerity or rationing, which there were several justifications for. Firstly, Israel was still recovering from the grueling 1948 War of Independence (during which foods products were also distributed and restricted). Secondly, and this was perhaps the most important issue, the government was extremely concerned that without rationing, the state wouldn’t be able to provide food and clothing to all the new immigrants, who were arriving in large waves at the time – most of them without any property whatsoever. Moreover, the government wished to reduce the cost of living through rationing, in order to prevent large economic gaps in society.

And so, Israeli citizens were required to take their food coupons, calculate points, and report to the grocery store where they were registered. They received oil, sugar, margarine and rice, and indulged in meat maybe once a week and fish maybe twice a month. Occasionally they received eggs, chocolate, 100 grams of cheese, or dried fruit. Due to the situation, there were often shortages, and costumers were not always able to receive the food products they desired. The frugal selection forced citizens to be creative when cooking their meals, and there were those who came to their aid: the cooking guru of the era, Lillian Kornfeld, produced a cookbook. The WIZO organization put together an exhibition in which “austerity dishes” were displayed. The government, for its part, tried to convince the people of the wonders of egg powder.

Due to the shortage of staple foods, a gray market and black market quickly emerged, alongside the regulated price system. Immigrants who received food coupons would sell these for money in the gray market. Quality products gradually fell into the hands of savvy merchants, who established the black market, where citizens could suddenly obtain eggs and meat, butter and chocolate. The government tried to combat the parallel market that popped up under its nose, and conducted aggressive publicity campaigns attacking it. The authorities also established an enforcement mechanism, which included searches of apartments and personal belongings, in an attempt to eliminate the black market.

Gradually, the restrictive rationing policy caused growing resentment among Israeli citizens.  The public slowly accumulated more money than it could spend. Citizens couldn’t use their money as they wished because of the austerity regime. In the summer of 1950, a general strike broke out among merchants, who demanded a change in government policy. Clothing and footwear stores, cafes and restaurants, all closed their doors.

The civil resentment quickly spread to the political arena. The “Mapai” ruling party indeed supported the policy, arguing that it was a necessary evil in order to absorb mass immigration, but its political rivals didn’t hesitate to attack the austerity regime. The most prominent party in the struggle against the rations was the General Zionists party. In the 1951 Knesset election, they campaigned under the slogan “Let us live in this country.” The successful campaign positioned the party as Mapai’s main competitor, and won the party 20 seats – it’s greatest achievement in the history of the state.

The rationing policy was officially abolished in 1959, but even before that, changes were made to the restrictions. Improvement in Israel’s economic situation, civil resistance, unbearable bureaucracy, and the black market that rendered austerity irrelevant, all led to changes in the policy. In 1952, Minister of Finance Eliezer Kaplan, and his replacement, Levi Eshkol, introduced a program called “The New Economic Policy” and took the first step in improving the economic situation of Israel’s citizens. Nevertheless, in retrospect, some say the austerity was a great achievement: Thanks to the unpopular measures, Israel, a young post-war state, managed to develop its economy and absorb millions of immigrants – without starving.