Home > אוכל > Who Won the Coveted Title of “Israel’s Eating Champ” in 1953?
Land of Israel

At the peak of austerity in Israel, the HaOlam Hazeh newspaper held Israel’s first eating competition 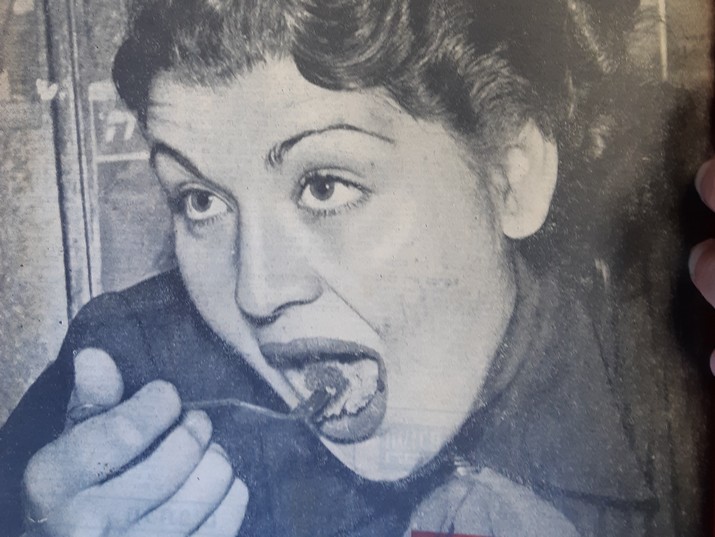 Kochava Benoliel, a participant in the 1953 food competition

When we announced the eating competition, we declared that this was a competition without any underlying ideology or lofty goals. It turns out that we were wrong. The eating contest pictured in this issue had both an ideology and a goal: laughter.

This is how the editor of Israeli weekly HaOlam Hazeh (“This World”) opened his op-ed in the issue immediately following the contest. In the editorial, he explains why the publication decided to hold the first ever competitive eating event in Israeli history in the midst of a period of austerity which included state food rationing and other emergency measures. An explanation was duly necessary, as this was a time (the early 1950s) during which the citizens of Israel struggled to provide their families with three square meals a day. HaOlam Hazeh and its editor-in-chief, Uri Avnery, were never afraid of stirring up controversy, and the eating contest fit their maverick style well.

“The people,” Averny postulates, “have not lost their sense of humor and they appreciate a dose of laughter, even during this period of austerity.”

“The people,” Averny postulated, “have not lost their sense of humor and they appreciate a dose of laughter, even during this period of austerity.”

The competition was held at the Kinneret Cafe in Tel Aviv on November 19, 1953. Six men and one woman competed for the prestigious title of ‘Eating Champion of Israel 1953.’ The rules were simple: the person who ate the most portions within one hour would be declared the undisputed champion. The portions served to the contestants were not refined chef’s dishes, as they were required to adhere to the governmental regulations of the time. The menu consisted of austerity meals which allowed for only a small amount of meat, and were portioned out under the direct supervision of a government food inspector.

Some of the notably unpretentious dishes that competitors were up against included: soup, spaghetti, stuffed peppers, vegetable goulash, potatoes cooked in sauce, noodles, and a whole head of cauliflower.

It was the spaghetti that overwhelmed the only female participant in the competition, Mrs. Kochava Benoliel Danalza, and resigned her to a fifth place finish. The austerity dishes vanquished the contestants one-by-one until finally, only two eaters remained. An unemployed driver, Avraham Rappaport of Givatayim, was eventually forced out after consulting his doctor. This left the young and hungry student, Itamar Rosenthal, as the last man standing atop a mountain of adequate, if not delicious, food. Following his resounding victory, the twenty-seven year-old champion declared, “I came, I ate, I conquered!”

So what was his secret?

It turns out that Rosenthal fasted for a few days prior to the contest, and an hour before the competition he took a dip in the sea, despite the cold, rainy weather. Unlike the other contestants who crammed the food in their mouths as fast as they could, he took his time, eating leisurely. When all was said and done, the champ had a few words of subtle gloating to offer, “…to tell the truth, I went home a little hungry.”

HaOlam Hazeh awarded the champ a bronze plate and, of course, the undisputed title of Israel’s Eating Champion.

HaOlam Hazeh awarded the champ a bronze plate and, of course, the undisputed title of Israel’s Eating Champion. If you liked this article, try these: Meet Queen Esther – Israel’s First Beauty Queen How a Kid Who Liked to Saw Rifles Became the Inventor of the Uzi The Beautiful Postcards Theodor Herzl Sent to His Daughter