"I will pay you with my blood for homeland and science.” 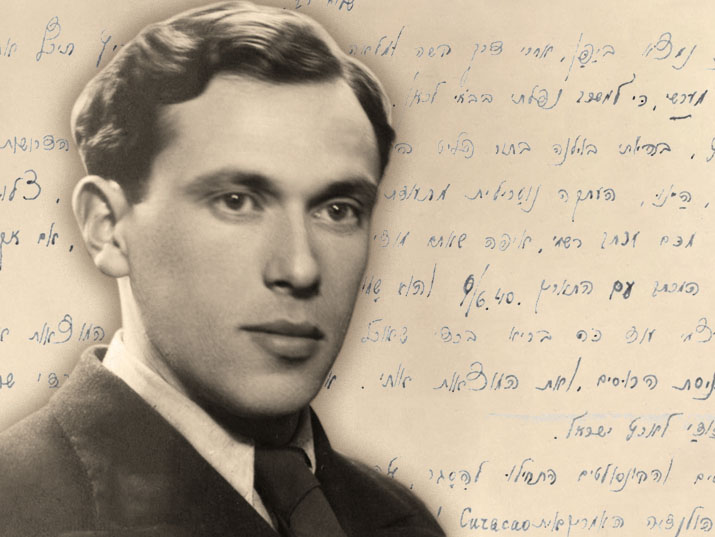 The third gathering of the Global Forum of the National Library of Israel will take place in Jerusalem on March 17-19, 2019, bringing together prominent figures to discuss this year’s topic: “Migration-Borders-Identity”.   The following article is presented in the context of this year’s theme, encouraging broader discussions of these topics.

To: The Administration of the Hebrew University of Jerusalem

It is now ten days since I arrived in Japan after an arduous and perilous journey, and having risen at last from my sick bed on which I fell with my arrival here, I reach out to you now in high hopes.

My name is Tanchum Rabinowicz. When I was in Vilna as a refugee, I sent you all the requisite documents in order to obtain a student-certificate, that is, a notarized copy of my Hebrew high school diploma, the application, photographs and curriculum vitae, for all of which I received from you an official letter informing me that you are willing to accept me on condition that tuition and other fees will be paid in Palestine. The letter bearing the date 9 June 1940 is in my possession.

I do not as yet feel well enough to describe in detail all the events of the Polish refugees in Vilna after the arrival of the Russians, and my own ordeals. I will describe them only in brief so that you will understand how I arrived in Japan in my wanderings to Eretz Israel.

Just as the Russians entered and consulates began to close, a few hundred refugees managed to obtain visas on their Polish passports to Dutch-American Curaçao [one of the islands], and based on these – Japanese transit visas, though no one believed at the time that any of this had any practical purpose, but the psychosis that infected everyone was the same, to acquire any type of visa. I too was among those who bought such a visa, and I kept it with me, and on the basis of it, I presented a request for an exit visa from Soviet Russia. The matter dragged on for months, but there was no one to receive the exit requests, on the contrary—we were prepared for them to send us to the dark mountains, or the “white-bears” [Siberia] as we called it in Vilna. Suddenly the situation took a turn and they started giving out massive numbers of exit visas. Among the recipients was myself.

Who could imagine my joy, who can describe the happiness and my friends’ jealousy? And indeed, the first group numbering 67 persons received exit visas and I was among the first. But all this was mingled with mostly pain and suffering, the Intourist [the official Soviet travel agency] would not accept rubles in payment for travel expenses, only dollars, and I had none. Because the visa had an expiration date, I didn’t think too long, and I and three other friends set off on the journey on our own and without our accounts (without getting in touch with Intourist). Thus, I traveled across Russia, buying tickets from one stop to the next, until I reached Vladivostok. I would never again attempt such a journey and in such a manner. Even now it is difficult for me to describe the hardships and obstacles we faced along the way and how we boarded the Japanese ship. Enough said that the Japanese consul from Vladivostok who helped me tremendously, came himself before the boat sailed and parted with me in front of everyone, and said it was an amazing feat of human heroism to make such a journey as I had.

Dear friends! I am, to my sorrow, once again a refugee. From my escape from the Soviets in Vilna, I left everything at home, I took only my high school diploma in order to contact you and only in this have I placed my hope, today as I am twice naked and a refugee + the letter from you which I have kept. Here am I lonely and deserted, and to whom should I turn if not to you—for your help. My situation is that I am on the edge of an abyss. The government does not permit me to remain here long, and since I am here only in transit, and if in case in the near future I do not receive any help to immigrate, the government will send me to Shanghai, where the material plight of the refugees is awful, without any aid, dying of starvation, and as bread is the most important force in our lives, and when one feels its lack it can bring a person to the brink, such is the situation in Shanghai. Dear friends, I cannot imagine that, for a few dozen Pounds that I have to pay, you would forsake a man – I risked my life on the path to Zion, I was educated in the spirit of loyalty to the homeland like you, who take care of homeland matters, I do not write in detail here because my head is still spinning, but I ask please, find my curriculum vitae in my documentation and read it again, and this letter afterward, and certainly you will not turn me away empty-handed.

I am pleading with you, send me a student certificate because I am standing at the precipice, don’t be so formal, I will pay you with my blood for homeland and science, but do not let me fall, I am already tired, and only just 23 years old, I send this letter to you without knowing if it will reach you, like a drowning man casting a message in a bottle into the ocean. I find myself now in a place foreign to my spirit and my soul, among people traveling to America with unused certificates in their possession, and they look at me, someone who is trying to reach and talking about Eretz Israel, with derision. Oh, that I may be able to find the time to describe everything, about Jewish psychology, about the awful collapse of ethics among the wealthy Jews in times of catastrophe and hardship. My telegraph address is Kobe Jewcom for Tanchum.

I am done, I know not whether there is any point to my letter, because as I said my head is still spinning. But know this, you will be saving a man for science and for Zionism.

I am awaiting your help via telegraph, and nevertheless keeping the faith!

The Telegraph regarding my issue was sent to you by the Committee for Refugees! 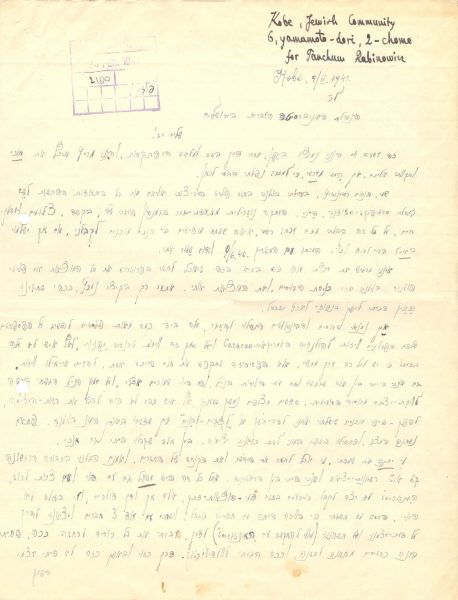 The letter written by Tanchum Rabinowicz was recently discovered in the archive of the Hebrew University of Jerusalem and was presented for the first time in the exhibition Uprooted: The German-Jewish Scholars of the Hebrew University, now on view at the National Library in Jerusalem. This is one document from Rabinowicz’s file for admission to study at the University which includes his application form and photograph, a copy of his high school diploma and curriculum vitae written in the first-person. The file also includes the correspondence he conducted with the university between May 1940 and March 1941 and uncovers a life trajectory that began in Poland before the war and ended with an escape to Japan four months before the onset of the destruction of European Jewry. Rabinovitch’s request is one of many such requests sent to the university in the 1930s by young Jewish men and women who hoped that studying at the university would grant them a certificate to enter Palestine. As expected, most were unsuccessful in this hope, and what remains is this record documenting their lives, desires, fears, and lives as refugees while trying to extricate themselves from Europe.

The letter of Tanchum Rabinowicz stands out among the nine requests for admission presented in the exhibition’s display case devoted to students, while as a group they reflect the cultural and geographic variation of the Jewish communities on the eve of the Holocaust. Rabinowicz, who was born in Stołpce in Poland (now Stowbtsy, Belarus), to a well-to-do Zionist family, was a revisionist and active in the Beitar movement in his hometown and completed his studies in the Hebrew high school “Tushia” in Vilna. With the outbreak of World War II, like many among the Jewish intelligentsia, he fled to Vilna, which had been annexed by the Soviet Union as part of the Molotov–Ribbentrop Pact but after a few months was transferred to the Provisional Government of Lithuania. As Rabinowicz describes, during his flight eastward in the hope of one-day reaching Eretz Israel, he carried with him all of his possessions— “my high school diploma, […] the only possession remaining to me on my way toward Zion.” While a refugee in Vilna, he filed an admission request to study at the university in Jerusalem to which he added a notarized copy of the diploma he had with him.

This document was sent from Kobe in Japan after Rabinowicz had succeeded, with great difficulty, in crossing the Soviet Union with the help of a visa he was given by the vice consul of Japan in Kaunas (Kovno), Chiune Sugihara.  Against orders, Sugihara issued visas to thousands of Jews looking to escape from Europe, in the aftermath of the re-annexation of Lithuania by the Soviet Union in the summer of 1940. In light of the Soviet’s intention to close the foreign consulates in Kaunas and the prohibition against traveling across the Soviet Union without a valid visa, Sugihara, who would one day be awarded the title Righteous among the Nations, gave out 2,139 transit visas to Japan with the final destination being the island of Curaçao in the Caribbean, which was then a Dutch colony and did not require entry visas.

The secretariat of the university was not indifferent to the cry of Rabinowicz’s letter and replied: “We do not have a single permit at our disposal […] but we want to help him and will do what we can to save him. […] We will try to find the means for this purpose from the national institutions, but it will not be easy, because the number of needy is great and the means minimal.”

It is unknown if the certificate from the university is what helped Rabinowicz to complete his journey to Palestine via India in 1941, the year the letter was written, at least according to the newspapers from that period. Upon arrival in Palestine, he enlisted in the British army and the Irgun and later joined the Jewish Brigade and was sent to the Italian front. In March 1945, while returning from a patrol, he was accidentally shot and he died a few days later. As he promised, Rabinowicz paid with his blood for his homeland but had not yet paid for science. At the age of 26, he was buried in Italian soil.