Avraham Horowitz (Gurewitz), a wedding merrymaker by profession, wrote poems, novels and novellas in Yiddish and Hebrew. He also adapted and modified the works of others, signing with his own name or with a variety of pen names in Yiddish and Russian. 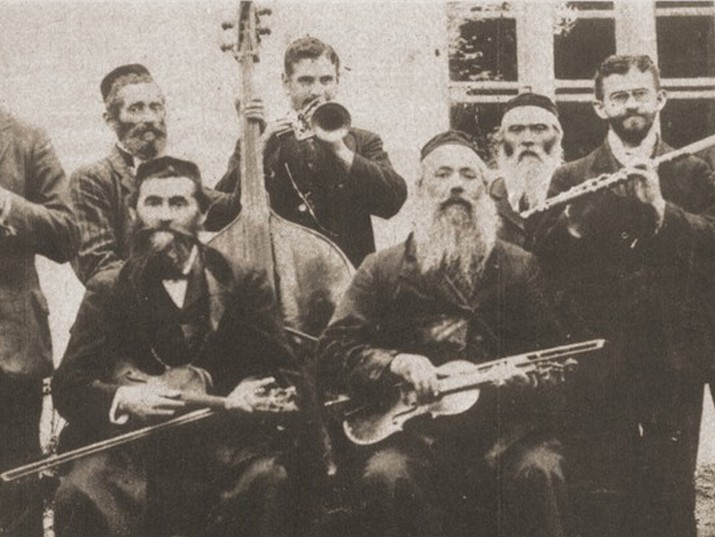 The Avraham Horowitz archive was handed over to Professor Dov Noy in 1974 by Horowitz’s grandson Meir, with the purpose of it being permanently deposited in the National Library. This was carried out only when the Dov Noy archive was transferred to the National Library in 2018. The Avraham Horowitz archive contains manuscripts, poems, novels, essays, anecdotes and other writings relating to the profession of merrymaking, as well as an autobiography and correspondence with his son Shaul-Hoshea Horowitz (1886-1956) and his family from Brooklyn.

Avraham Horowitz was born to his parents Israel and Elka on February 26th, 1863 in the city of Borisov, in the district of in White Russia. His family of nine was not wealthy. His father earned his living as a melamed (religious teacher), while his mother supplemented the family’s livelihood as a cook in the wedding kitchens of the rich.

As a young man, Avraham studied in the cheder (traditional elementary Jewish school) where his father and one of his uncles taught. Afterward, he attended the local yeshiva in Borisov for thirteen years.

Avraham was not a very diligent yeshiva student, but he liked the joyous atmosphere of the rich weddings he used to attend when he accompanied his mother in her work. There he enjoyed the cheerful atmosphere and formed an emotional attachment with the merrymakers and the Klezmer musicians. The mother made sure that his father would remain unaware of his son’s new friendships with the local comedians.

Avraham would secretly  read pulp fiction stories that he borrowed from the local book-merchant and author Hillel Klivanov. Since Klivanov had a physical disability, Avraham used to help him and write down the poems that Klivanov dictated to him.

At the age of sixteen, Avraham wrote his first poem in Yiddish, a lid fun Chaya-Rone-Meren (“A Poem about Chaya-Rona Mere”), which told the story of the boys and girls who would roam the local forest together on Sabbaths and holidays. The poem was written in a tone that was not acceptable in the society to which his family belonged. When his father found out about the poem, Avraham even received lashes for it.

When the conflict between him and his father grew worse, he left the house and lived with a relative who owned a kiosk at the train station in Borisov. Abraham worked there as a porter, carrying suitcases and unloading freight cars. Later he became a guard at a textile factory. There he had an accident. His right hand became stuck in the wheel of a weaving machine and broke in three different places. Avraham was interned in a hospital in Minsk, where the doctors had to amputate his arm past his elbow. After his release from the hospital, he returned home to his parents for recovery. There he received support and encouragement. As time passed, Avraham learned to write with his left hand. In 1881 he composed the poem der umglicklicher (“The Unlucky One”), in which he expressed strong remorse for the rebelliousness against his parents which had led him to leave the family home. This poem should not be confused with the poem der umglicklicher yidele (“The Unfortunate Jew”), written in 1884, which tackled the subject of Jewish life in the Exile.

“There, deep in the forest,

From where comes no answer,

There, where there is no rest,

My life becomes a nightmare!

There screams the Jew; He is very angry:

Why all this torture, oy?

He is frightened and shivers badly,

Now he is in Raswoy*.

Hear it! How he shrieks,

How he cries for weeks:

What is the vice for which you blame me

What have I done?

What should I’ve done?

But the Jew gets no mercy. “

(* Probably the name of a place)

Avraham became a wedding merrymaker (a badchan, a joke-teller or comedian) by chance. It happened once that the Klezmer musicians from the local orchestra in Borisov came to Hillel Klivanov, bringing with them the famous wedding jester known as Chaimke, who was also a member of the Klivanov family. On that day, two weddings were being celebrated at once – one in Borisov and the other in one of the neighboring villages. Chaimke the merrymaker, who had no substitute in the region, decided to perform at the wedding in Borisov. Thus, it was suggested to Avraham that he attend the wedding in the neighboring village and performing there as a jester in Chaimke’s place. Avraham agreed, since he had composed his own poems and limericks and was fairly well versed at coming up with sarcastic barbs as well.

“And so it was, and so he counted.

Let us open with an explanation

Let us begin to explain

Six, what can they be?

Six are the in-laws, luckily

Ready to count all their money.”

For the 1955 recording of the wedding song Echad Mi Yodea by Sam Trooper from the National Sound Archive, click here

Avraham bought himself a thick notebook, in which he wrote down the popular songs and the poems of the period. He compiled Hilel Klivanov’s songs and adapted them to a style acceptable for Jewish weddings. Abraham also composed poems and songs of his own, and even sang or recited them to entertain the guests of the weddings at which he performed. Apart from his performances in the city of Borisov, which was where Chaimke Klivanov usually performed, Avraham would also make appearances in the many surrounding towns and villages. Finally, he settled down in the city of Berezino (Berzin) which lacked its own comedian. He built up a local reputation, got married and remained in Berezino for the rest of his life.

He was said to have the appearance of “a quiet fool”. Behind his back, they called him “Avrahamel der marshelik” (Avraham the clown), but officially, he was called “Rabbi Avraham badchan” (Rabbi Avraham the Comedian). In the towns surrounding Berezino, he was referred to as “der Bereziner marshelik” (The clown from Berezino), or “der odnaruker”, which means “the amputee” in Russian and Yiddish.

Avraham Horowitz had a beautiful baritone voice, long hair, and on his little finger he regularly wore a thick ring and wore a short coat. His clothes were not new, but perfectly polished and clean, including his trademark short coat. Under the chuppah and in the bridal seat, Avraham would wear a silk kippah or yarmulke.

He had earned his living as a wedding merrymaker for more than thirty years, but the last twenty were difficult. The customs of the Jewish community changed, weddings celebrations grew smaller and more modest, and there was hardly any need for jesters and comedians. Therefore, to earn some extra income, Horowitz bought  in partnership with others an industrial shredder. He then opened a small grocery store and even rented an apartment out for members of the Bund (the General Federation of Jewish Workers in Russia), where they would hold their meetings. During the High Holy Days, he served as a cantor in one of the local synagogues. Following the Russian Revolution he suffered from financial distress and became a guard on a landowner’s estate.

Avraham Horowitz also wrote a poem dedicated to the memory of Theodor Herzl, marking the anniversary of the Zionist visionary’s passing:

“Come, my people, the exile nation

Come into the  shul today, not tomorrow

Spill your tears there in lamentation

Full of grief and  sorrow.

On the  day he  died

Herzl, the hero of the nation

On the dead land of annihilation.”

During his lifetime, only the first two chapters of his novel der schwartzer peltz mit’en weissen kallner (The Black Fur Coat with the White Collar) were published in Minsk in 1928. He was sixty-eight years old when he began to rewrite his works and sent them to his son Saul Hosea. On the recommendation of Dr. Yaakov Shatsky, Avraham Horowitz wrote memoirs, based on recollections of local people as well as other sources, in order to document and preserve the wedding customs of the period. This collection of memoirs was meant to be published in volume 2 of the book “Archiv far Geschichte fun Yiddishen Teather und Drame” (Archive of the History of Yiddish Theater and Drama), but the book remained unpublished due to the outbreak of World War II.

Avraham Horowitz became blind in his old age and sought the help of doctors in Minsk, but without success. In the last two years of his life he suffered from paralysis, and died, completely blind, on December 30th, 1940, thirteen days after the death of his wife. He was buried in the cemetery in Berezino.

(The article above is based on biographical notes, written in Yiddish, by Avraham’s son Shaul-Hoshea Horowitz)

The Avraham Horowitz Archive has been reviewed and described thanks to the generous support of The Leir Foundation.