The “New Haman” of Frankfurt

The Jews of Frankfurt established a second Purim in 1616 in celebration of the downfall of a new Haman who tried to eradicate the local Jewish community. 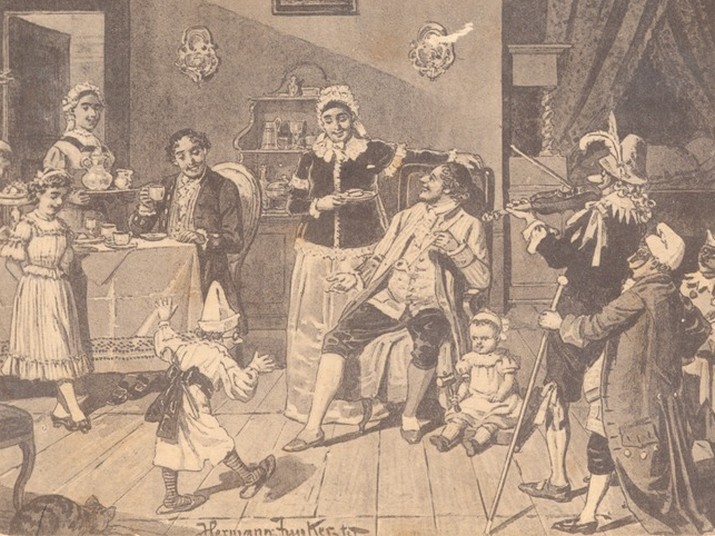 Postcard from the end of the 19th-century featuring an illustration by Hermann Junker of a Jewish family in Germany celebrating Purim. Image from the Folklore Research Center, Hebrew University of Jerusalem

My grandfather’s book collection was impressive. With him, it was hard to play the usual game of guessing someone’s personality through their selection of books because he spent the later decades of his life as a bookbinder in Jerusalem and had a love for the physical material of books. His bookshelves included all sorts of books that people had left him or that he had found and fixed. That being said, I can’t be sure that the old siddur I have from him is the one that he actually used.

The Sfas Emes siddur is fairly famous in Germany. It was first published in Rödelheim by Rabbi Wolf Heidenheim in 1799 and is still being re-published in the German-speaking Jewish world today. Almost every page makes mention of the special liturgical traditions of Frankfurt. In Frankfurt, one says such and such, in Frankfurt one changes the order, in Frankfurt this word is omitted.

I was using my copy of the siddur that I got from my grandfather for a while, trying to get the feel of it, when I noticed an interesting note. Within the list of ‘happy’ days – days of celebration and holidays on which it is inappropriate to say the penitential prayer called Tachanun, the note adds “In Frankfurt-am-Main, also Frankfurter Purim [is celebrated] on the 20th of Adar.”

I’m a big fan of regular Purim but had never heard of Frankfurter Purim. I decided to do a bit of research and this is what I learned.

Frankfurter Purim, also called Purim Vintz, celebrates a local miracle on the 20th day of the Hebrew month of Adar, just six days after the holiday of Purim. In 1614, a local baker and troublemaker named Vincent Fettmilch who considered himself to be the “New Haman” lead the city guilds in an uprising against the new Emperor. Included in their demands for lower taxes were also demands for fewer Jews in town and lower interest rates on Jewish loans.

When the Emperor ignored or rejected the demands of the city guilds, Fettmilch led a mob to ransack the Jewish quarter of Frankfurt, burning, fighting, and pillaging until the entire Jewish population was forced to flee. Two years later, in February of 1616, Emperor Matthias had Vincent Fettmilch and five of the other rebels hanged, and the Jews were allowed to safely return to the city. The proximity of the hanging to Purim that year, as well as the resonances of the Purim story, encouraged the community to celebrate the return as a mini-redemption, with special songs and a long poetic retelling of the story in Judeo-German called “Megillat Vintz.”

Frankfurt is not alone. In many Jewish communities throughout history, local episodes of near-destruction and sudden salvation have been marked along the lines of Purim. Reading through the history books and discovering hints of Purim Narbonne, Cairo Purim, Purim Hebron, Purim of Saragossa and the four Purims of Ancona, Italy, to mention just a few, is a fascinating experience.

The echoes of these celebrations are still felt today. In his latest halachic (Jewish law) treatise, Peninei Halacha, Rabbi Eliezer Melamed defends the religious obligation to celebrate Yom Haatzmaut (Israel’s Independence Day), despite voices that claim that creating holidays after the destruction of the Temple is forbidden, by citing the precedent of Purim Frankfurt.

For me, now, living and continuing my rabbinical studies in Berlin, these stories of local Purims bring life and complexity to the country I now live in, connecting me to libraries and synagogues in Frankfurt and Jerusalem. Nobody in Frankfurt today celebrates Purim Vintz, as far as I know, and since my grandfather z”l has passed away, I cannot ask whether this was the siddur he grew up with. The Jewish story is colorful and complicated, and having a story like Purim being retold and made continually relevant is an inspiration for me today.