The Israeli Roots of the Penalty Shoot-Out

Cherry tomatoes, soup mandels and penalty shoot-outs – all Israeli inventions! This is the story of the most significant Israeli contribution to the beautiful game 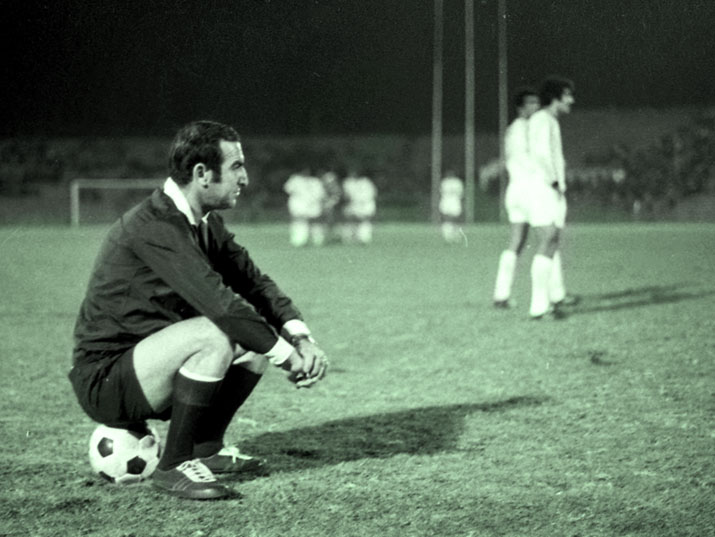 From the Dan Hadani Collection, the Pritzker Family National Photography Collection at the National Library of Israel

It was a hot summer’s day in July, 1994. Millions of viewers were glued to screens around the world, watching Italy and Brazil compete in the FIFA World Cup final, taking place at the Rose Bowl in Pasadena, California. It was a tedious affair, with not a goal being scored, even during thirty minutes of extra-time. Thus, the stage was cleared for the great climax – the World Cup would be decided for the first time by a penalty shoot-out! Football (soccer) fans who watched the event still remember how Roberto Baggio, the star of the Italian team, missed the final penalty kick, and the Brazilians were crowned world champions.

It seems that the roots of this dramatic scene reach all the way back to… Israel? Yes, the man responsible for implementing this method of deciding football matches was named Joseph Dagan, an Israeli journalist at the time. It was he who came up with the radical new system which to date has caused the downfall of many a footballer, brought about countless moments of joy and despair for fans and players alike, and more than anything, contributed to extreme levels of tension and anxiety for all involved.

Until the 1970s, whenever a victory decision was required in a football tournament, matches which ended in a draw were primarily decided by playing a replay match in a neutral venue, or worse, by flipping a coin. Apart from the heavy burden that the replay matches placed on the players, they also led to complicated logistical problems, since it wasn’t always possible to schedule replay matches in tight tournament schedules. As regards coin flipping, there’s no real need to explain the problem – this odd method had nothing to do with sport, and matches decided in this way were naturally a source of much grief and disappointment. Penalty shoot-outs had been used here and there during several specific tournaments, for example in Yugoslavia. From there, the method spread to Israel where it was used in cup matches (the newspapers called it “the Yugoslav method”).

Dagan was a sports writer for the Ha’aretz newspaper and soon became a member of the Israeli Football Association, being appointed its general-secretary. He had a front row-seat during the Israeli national team’s fantastic campaign at the 1968 Summer Olympics in Mexico. At the time, there was no age limit set on players in the Olympic tournament, and the Israeli team included the likes of Mordechai Shpigler and Giora Spiegel, who would famously be part of the only Israeli team to participate in the World Cup, two years later.

The Israelis succeeded above and beyond expectations at the 1968 Olympics and reached the quarter-finals, where they played against the esteemed Bulgarian team. The game ended in a draw, even after extra-time, and the Bulgarians were finally declared victorious following a coin toss, continuing on to the semi-finals. Israel returned home, with only the flip of a coin preventing a sensational sporting achievement. However, Dagan had an idea. These games needed to be resolved differently – and following the incident, Dagan decided the penalty shoot-out, used to this day, should be established as the proper method for deciding matches which ended in a stalemate.

Micha Almog, who at the time was chairman of the Israel Football Association, brought Dagan’s idea to FIFA, the International Federation of Association Football, and in 1970, the method was approved by the international organization. Later that year, the penalty shoot-out was used for the first time in a cup game in England, and gradually, the system spread across the world. Penalty shoot-outs were first used in the World Cup in 1982, and since then, they have twice decided the result of the final. Although penalty shoot-outs have also been criticized over the years, no better method has yet been suggested.

Dagan, who passed away last March, was officially recognized by UEFA, the Union of European Football Associations, for his contribution. In fairness, it should be noted that a German football referee named Karl Wald also claimed to have invented the method – at the exact same time – before offering it to the Bavarian football association, from where the idea reached FIFA. But as far as we’re concerned, with all due respect, this is yet another Israeli invention.

The Man Who Named the First Israeli Car – The Susita

Amit Naor, an avid history fan, and Israeli history in particular. Likes practically anthing about pop culture, sports and politics. Married to Ma’ayan, father to Itamar and the one who keeps Juno the cat from starving

For more stories by Amit Naor >>