Blood of the Maccabees: How a Little Red Flower Became the Symbol of Israel’s Memorial Day

Home > Israeli Memorial Day > Blood of the Maccabees: How a Little Red Flower Became the Symbol of Israel’s Memorial Day
Land of Israel

Every year on Yom HaZikaron, Israel's Memorial Day, many of us wear the famous Dam HaMaccabim sticker; the connection between the flower and the occasion was made in the early days of the state 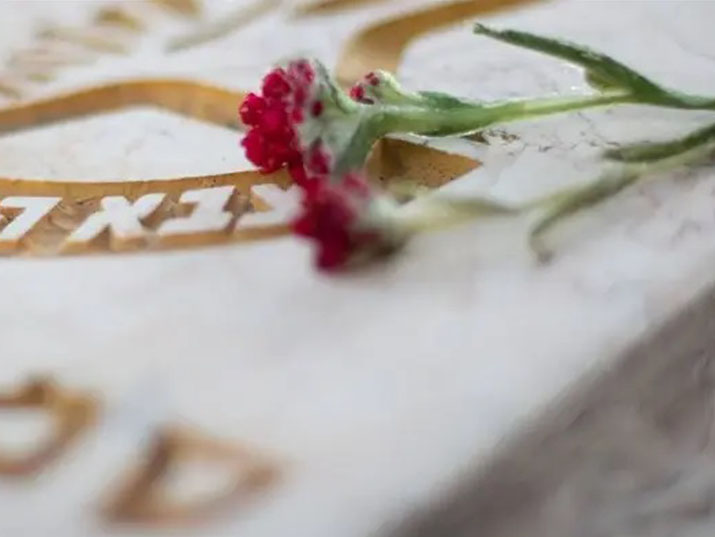 The days were the days of the Maccabean Revolt, and the battles were brutal. The Maccabees fought fiercely, but many of them fell in battle. And, according to legend, wherever a Maccabi warrior’s blood spilled, a small flower instantaneously sprang up and bloomed, its color the color of blood. This is how the flower in question, received its Hebrew name: Dam HaMaccabim (literally “Blood of the Maccabees”; Helichrysum sanguineum, otherwise known as “red everlasting”). With spring now upon us, Dam HaMaccibim can be seen blooming across the Land of Israel, from the north to the south.

From this poignant legend, which is not unlike the legends of other cultures around the world, one can easily guess the answer to the question posed by this article: How did this protected plant become a prominent symbol of Yom HaZikaron – “Memorial Day for the Fallen Soldiers of Israel and Victims of Terrorism”? Yet, even though the answer is seemingly quite clear, we dug a little deeper into the historical roots of this connection to find out when exactly this link between the flower and the occasion was forged.

A search of the National Library’s JPress – Historical Jewish Press collection reveals that the first mentions in print of the Hebrew phrase “Dam HaMaccabim” were mainly quotations from passionate speeches that sought to strike a chord in the hearts of young Zionist Jews. Writers and speakers sought to remind their audiences that the blood of the brave Maccabees still flowed in the veins of Jews who were soon to return to their ancient homeland. Or perhaps they had already returned and were in need of some extra encouragement. The link between the heroism and blood of the Maccabees and the blood now being spilled protecting that same homeland was almost self-evident.

And the blood will not rest nor be silent

It wells up from the stones of Jerusalem

Wander across the surroundings hills

At your feet, see the red-eyed flowers…

– From the Hebrew poem “Blood of the Maccabees” by Y.D. Kamzon, which appears in the image above

Thus, the cultural reference of the blood of the Maccabees and the fallen may have already appeared as early as the days of the War of Independence. In Haim Gouri’s famous poem “Here Lie Our Bodies,” the flower, not mentioned by name, is evoked in the line: “We will return, we will meet again, we will come back as red flowers.” The idea of ​​connecting a red flower to the memory of the fallen in battle was not a new one: it had become common after World War I, with the adoption of the poppy as the symbol of the British soldiers who fell on Flanders Fields. In Palestine, a new symbol not associated with the British conqueror was needed; one that would stress the connection to the ancient Jewish heroes instead.

In 1950, a woman by the name of Miriam Trop designed a poster for Israel’s Independence Day that included the flower mentioned by name. Unfortunately, we were unable to find a copy of the poster, and therefore we do not know exactly which flower was depicted.  This is because at that time Dam HaMaccabim was also the name for another flower, known in English as “pheasant’s eye”, or Dmumit in today’s Hebrew. This flower was emblazoned on a special medal awarded to the disabled veterans of the IDF beginning in 1954. The botanical confusion was considerable, and that same year, a special stamp was issued in honor of Independence Day featuring the flower we know today as Dam HaMaccabim.

Another contributor to the flower’s symbolism during this period was Yitzhak Sadeh, “The Old Man”, who was among the founders of the Palmach and one of the IDF’s first generals.  In one of the many texts he wrote, Sadeh returned once again to the ancient story and appealed to the hearts of the young members of the Palmach, the underground Haganah organization’s elite fighting force:

“Thus time has ground down and washed away the figures of the Maccabees, erased the inconsequential and left us only that which is essential. . . the blood of the Maccabees.  And this very blood, I say this simply and with conviction, this blood courses through our veins. And on this point, as it was for them, so shall it be for us.  And should even a drop of our blood fall on the soil of our homeland, there will grow a small, red, low-lying flower that will be named for them.” These very words were also recited at Sadeh’s graveside on the thirtieth day following his death in 1952.

In the mid-1950s, we find further evidence of the flower’s place among the Memorial Day symbols as well as indications of the British custom’s influence. As in Britain, where it is customary to wear a poppy flower on the lapel at ceremonies commemorating the fallen soldiers of World War I, an announcement was made in 1955 declaring that elementary school children would be asked to wear the Dam HaMaccabim flower. That same year, it was decided that the flower would be an official symbol of Israel’s Memorial Day.

From the mid-1960s, the Dam HaMaccabim flower took center stage in one of the most successful ad campaigns in Israeli history: the campaign against picking wildflowers. Dam HaMaccabim was one of the first flowers to be declared a “protected flower” and picking them was forbidden. This was apparently the start of the alternate practice of affixing the by now well-known sticker featuring the red flower to the lapel. This sticker is distributed every year in the millions by the Israeli Ministry of Defense. 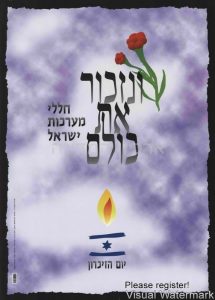 In recent years, an association known as the Dam Hamaccabim Project has begun operating in Israel with the aim of replacing the sticker with a pin of the flower. It has even set a future goal of growing the flower commercially so that it can be picked without fear.  In 2019, the association conducted its first pilot and distributed 30,000 pins.

If you have more recollections or information about the Dam HaMaccabim tradition and its connection to the commemoration of the fallen soldiers of Israel, if you were there when this tradition first began, or if you used to wear the flower on your clothing, tell us more here in the comments, on Facebook, Twitter, or Instagram.

If you liked this story, try these:

The Rebel Woman Who Fell in the Battle of Tel Hai