In July 1943, in the midst of World War II, notable members of the "yishuv" gathered in secret in a Tel Aviv suburb, to proclaim the establishment of a Jewish government in the Land of Israel 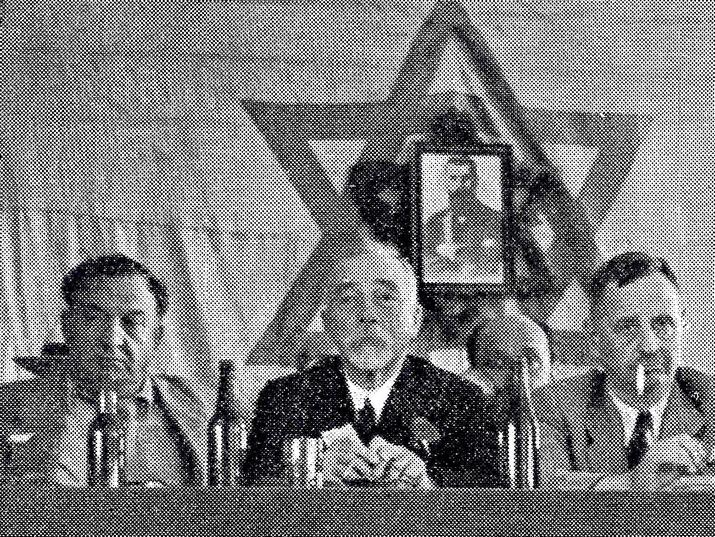 Few people are aware that the declaration of independence of the State of Israel on May 14th, 1948, (the fifth day of the month of Iyar in the year 5708, according to the Hebrew calendar) was preceded by another, almost clandestine ceremony, in which the establishment of a Jewish government in the Land of Israel was proclaimed. In many ways, that forgotten ceremony represented a last hurrah for the Zionist movement’s old guard.

“[British police] detectives were tracing our every move the entire day,” recalled Abraham Krinitzi, one of the organizers of the proclamation ceremony, in his memoir. Krinitzi, head of the local council, and later a legendary mayor of Ramat Gan, a suburb of Tel Aviv, had some experience with the British police. They had even called the settlement he headed “the incubator of terrorism,” because of its involvement in sheltering members of the underground. The day Krinitzi recounts was July 25th, 1943 – the day “The People’s Congregation” was set to convene in Ramat Gan.

By the summer of 1943, news of the annihilation of European Jewry had begun to reach the country, and many in the Jewish community felt a sense of helplessness in the face of it. Alongside the call from Jewish leaders for cooperation with the British in their war against their mutual Nazi enemy, the underground organizations, the Haganah and the Irgun, announced a pause in the struggle against the British. The Lehi, another group which had split off from the Irgun, was then at a low point following the murder of its leader, Avraham “Yair” Stern, and the jailing of his successors.  The fact that many Jews enlisted in the British army and assisted in the war effort did not dull the sense of rage and powerlessness the Jews in Mandatory Palestine felt about the closing of the country’s gates to Jewish immigration and the negative stance of the British government toward any manifestation of independence.

Given this situation, a group of veteran Zionists of Jewish-Russian background who had been sidelined from positions of leadership around two decades earlier, decided to take action. The Zionist movement’s “changing of the guard” had left no room for the founding generation. They increasingly saw themselves pushed aside, not to mention taken aback by the struggle between the socialists and revisionists. Most of the members of this group naturally tended toward the right of the political map and identified more with a firm and independent approach in relation to the British Mandate.

Their idea was simple, even if not completely rooted in reality: The Jews of Palestine would establish a united front that was independent of the institutions of the Jewish Agency, which they perceived as weak and ineffectual. Based on relative political power, the parties would elect representatives who together would constitute a 120-member Hebrew parliament. Given the state of war in which Britain found itself, and in consideration of the loyalty demonstrated by the Jewish yishuv (the Jewish population in Mandatory Palestine), they believed Britain would recognize the independence of the Jewish authority to be established in Palestine and grant it limited independence, under its protection.

Krinitzi wrote in his memoirs, but not before he made a point of noting his own role as one of the idea’s initiators, that “the living spirit behind this was Dr. Avraham Weinschal.” Weinschal, a respected lawyer from Haifa, a friend of Jabotinsky’s and one of the founders of the revisionist movement in Palestine, made sure to include his likeminded ally and colorful figure Dr. Wolfgang von Weisl in this endeavor. The doctor, who had served as an officer in the Austrian army and bore a noble title, was, in addition, a respected journalist and welcome guest at the courts of Arab princes, who showed high regard for his vast knowledge of Islamic culture.

Von Weisl’s bold and daring nature suited the plan that was beginning to take shape. Perhaps more than it was meant to rebel against British rule, the plan was intended to defy the existing Zionist leadership and constitute a kind of “revolt of the elders.” Van Weisl needed help preparing for action and forging contacts with various groups, and for this task, he chose the young Uri Avnery, then barely twenty years old, who would go on to become a famous figure in the realm of Israeli journalism, activism and politics.

In his memoir titled Optimistic, Avnery recounts meeting with Von Weisl and the latter’s failure to achieve the broad coalition for the establishment of a “government in exile.” Skepticism, along with partisan divisions, apparently prevented the great rebellion from being carried out to its full extent. Also, the close surveillance of the British forced Von Weisel to temper the plan of action.

Weinschal, Von Weisl and their friends decided to hold a large public meeting in which a “Jewish Government in Exile” would be declared. Krinitzi volunteered to host the gathering in Ramat Gan, in the auditorium of the Ohel Shem high school, today the Yahalom High School. The name of that select gathering— “The People’s Congregation” — from which the government was elected, showed the desire to achieve a broad consensus as well as the desire to not arouse the anger of the British,  by avoiding words like “government” or “parliament.”

The proclamation began with a symbolic act intended to show the loyalty of the Jewish yishuv: in the Great Synagogue of Ramat Gan, Rabbi Yaakov Moshe Toledano held a memorial service to commemorate those of the community who had died while serving in the British Army. Immediately afterwards, hundreds of the invitees walked from the synagogue to the school building, where the assembly was officially opened. Seated on the dais were the members of the directorate, Prof. Joseph Klausner, Israel Rosov, Avraham Weinschal, and Abraham Krinitzi, among others. Von Weisl’s name was absent from the directorate and from the list of participants. Was the decision to moderate the demands of that “temporary government” what caused him to leave?

Years later, Avnery, who was likely the youngest participant at that event, did not recall an extraordinary historical event. The long, pathos-filled speeches delivered by members of the directorate and other veteran public activists turned the historic proclamation of a Jewish government into yet another toothless public gathering. In the slim pamphlet of the collected speeches delivered that day, the anonymous publisher took care to note whether a speech was received with “sustained applause” or “thunderous sustained applause”. From the perspective of the young Avnery who found himself in a strange event organized by the “elders of the generation,” he remembered it as a particularly lackluster affair.

The text of the telegram sent at the end of that day to British Prime Minister Churchill, to US President Roosevelt, and to the Prime Minister of South Africa, reinforces the sense of a missed opportunity, the result of a lack of political daring. “The People’s Congregation that gathered in Ramat Gan,” the telegram says, “draws the attention of nations united in their fight for the freedom of the world’s peoples, to the severe violation of the rights of the Hebrew People, caused by the lack of recognition of the People of Israel as an ally, fighting party and equal partner with the other united nations.” Only towards the end of the telegram is the explicit demand made: “Basic justice demands recognizing the right of the Jewish People to be represented by a temporary Jewish government to share in the war and in peace building and to secure its future as a free nation in its homeland.”

Avraham Krinitzi was forced to admit that the historic conference ended only with proposals for action and the election of representatives, and no practical significance. However, the fact that British censorship prevented the event from being publicized in the press did not, he said, prevent the leaking of the news of its having taken place. Krinitzi mockingly refers to the blackout imposed on this “ideological terror” as the British called it, concluding: “Indeed, there are also those for whom an idea is terrorism, and perhaps not one of its less dangerous forms. It sows the seeds in hearts, in minds. And I know from experience: He who plants the seed is destined to see it grow.”