A chilling letter found in the National Library archives tells the story of Hadassah Lempel, whose voice was the last one heard during one of the fatal Battles of Latrun in 1948

“They said she was pretty. That she had big, sad eyes. That she was on her own. Her name was Hadassah Lempel. A new immigrant. Hers was the last voice heard from the unit that breached the courtyard of the Latrun police station on the night of May 30th–31st, 1948. She and the rest of the force were engulfed in flames. Some told about a woman’s bloodcurdling cries from inside the inferno amid a hail of gunfire and the desperate screams of the wounded. And there were the enemy’s stories of a girl wearing a radio headset in the armored vehicle filled with dead and wounded, screaming to the legionnaires to surrender. Her mother and sister who arrived in the country after her, were four months too late. A small photograph and a memorial over a communal grave were all that she left them.”

In 1988, a few months after the publication of her book The Teheran Operation, Israeli author Devorah Omer read these heartbreaking words about Hadassah Lempel. The Hadassah in the article was also one of the characters in her book. Hadassah had been one of the Teheran Children, a group of approximately 800 children of families that had escaped or were exiled to the Soviet Union from Poland during World War II, and who finally reached Mandatory Palestine in 1943, after a long and arduous journey that crossed through Iran.

Hadassah was just 14 years old when she arrived in the Land of Israel, and it was only here that she finally became Hadassah – before that she had been known as Helena or Helinka. She moved from one kibbutz to another until she was eventually drafted into the Palmach, the elite fighting force of the Haganah organization, one of the precursors of today’s Israel Defense Forces. Hadassah was soon assigned to escort convoys bound for Jerusalem.

The supply convoys to Jerusalem left Tel Aviv along the only road connecting Jerusalem with the coastal plains, which passed through the area of Latrun. Due to its strategic importance, the British had established a police station there to control the road. On May 14th, 1948, as the British were set to leave the country, the establishment of the new Jewish state in the Land of Israel was declared in Tel Aviv. That night, the British vacated the Latrun police station, enabling the Jordanian Arab Legion to take control of it. The first battle for the liberation of Latrun, a bloody affair which ultimately ended in failure, took place ten days later on the night of May 24th–25th. The second attempt took place on the night of May 30th–31st. A unit was sent to breach the police station. The mission’s signal operator was Hadassah Lempel.

Devorah Omer, who always conducted thorough research before beginning any book, discovered new details about Hadassah Lempel while reading the article by Israeli author, journalist and Palmach veteran Menahem Talmi, which is quoted above. She read of “a woman’s bloodcurdling cries from inside the inferno” amidst the hail of gunfire, explosions and screaming wounded. She read about a girl with a radio headset sitting inside a damaged armored vehicle filled with wounded men, shouting to the Arab Legion soldiers in the police building that their end was near and they had better run before it was too late.

In the article, Talmi wrote that Hadassah’s voice, emanating from the command vehicle which stood at the head of the force, was the last sound to come from inside the firestorm at the Latrun police station. It was the last report to reach the brigade headquarters about the failed attack, about the brutal battle and the many casualties. In her final moments, she reported that the force commander, Yaki, and his deputy, had both been injured. Hadassah received the order to retreat and Yaki was able to instruct all who were still capable to save themselves. After that, her voice fell quiet. Yet Talmi wrote, “Her voice continued to resonate with those who heard, or those who learned of it from word of mouth. And there were some who asked, with pent-up rage, why a girl had been sent to the front line, why had she been placed with the force making the breach, and whether equality between the sexes, between male and female soldiers, was essential in such  cases.”

Even though her book about the Tehran children had been published, Omer was eager to hear more about Hadassah Lempel, so she wrote to Menahem Talmi, asking him to tell her everything he knew. She received a letter from him in response with a chilling description of Lempel’s final moments. From the letter, she discovered one more thing that Talmi did not mention in his article. He revealed that he himself had heard her voice coming across the hand-radio in the midst of the battle:

I received your letter in connection with the article about Hadassah Lempel z”l. You knew her, as you write, from Givat Brenner [a kibbutz in central Israel], and then she served as one of the characters in your book about the Tehran Children. I didn’t know her and I never saw her. But I knew her voice and it has haunted me for years. I did not take part in the battles for Latrun, but at the time I was at one of the posts above Sha’ar Hagai [a location on the road to Jerusalem] and on my two-way radio, which was the same as the ones in the armored vehicles that went to breach the police station at Latrun, I listened to what transpired in the Ayalon Valley.

I heard her voice, the clear, subdued voice of a girl caught in the midst of the awful and hopeless battle. I heard her reports, without knowing exactly where she was. But I understood the situation she was in. Her speech and voice were bone chilling. It was clear that she was already speaking from the inevitable abyss and it was like needles piercing your flesh. The news she reported over the airwaves was grim. Despite her desperate state, her voice did not betray her. And you’re sitting far away, not physically involved, in a relatively safe place, listening to the voice of some anonymous girl sent into the heart of the battle, not knowing who she is, unable to help her, hoping that something will happen and she’ll be extricated from it. But no such thing took place.

Her voice faded. I still heard those who were in contact with her on the two-way radio calling her repeatedly – but there was no answer. I understood what they understood.

For years, the voice of this anonymous signal operator haunted me. For years, this situation haunted me: the experience of listening to the death of a human being over the airwaves.

Ahead of the fortieth anniversary [of Israel’s independence] I decided to write about this anonymous voice. I traced the footprints. It turned out that the writers of the history of the Battles of Latrun mentioned her here and there. I located her sister, collected the material, sifted through it, wrote – and the reactions started pouring in. Lots of comments – from regular people and from those who were with her at different points, some who have memories, some photos, some letters. What is interesting and encouraging: Even in this weary and cynical age, there is still great sympathy and identification with the heritage of the past and with those who gave their lives so that such a legacy continues to exist.

In addition to the chilling description of the battle, which also appeared in the article, Talmi’s letter to Omer contains a personal element. More than anything else, what stood out was the difficult experience of a soldier’s helplessness (in this case Talmi’s) in not being able to aid his comrade.

In the letter to Omer, especially in the last paragraph, Talmi also addressed the meaning of “memory,” expanding on it as a motive and purpose. He wrote: “For years, the voice of this anonymous signal operator haunted me” and “[a]head of the fortieth anniversary [of Israel’s independence] I decided to write about this anonymous voice.”

The agony of personal memory that remained for Talmi, that dreadful personal experience of being a soldier out of harm’s way while your fellow comrades-in-arms are on the front line, and maybe even the urge to atone for his inability to help in real-time, led him to write about Lempel to keep her memory alive.

In the failed attempt to breach the Latrun police fortress in Operation Ben Nun II, Hadassah was killed along with another 30 fighters. Lempel’s mother and sister, who survived the horrors of the Holocaust and arrived in Israel about three months after her death, did not find her. Only a few weeks later did one of her friends leave them a message that 19-year-old Hadassah had been killed in battle. A year after her death, she was buried on Mount Herzl in Jerusalem, in a mass grave along with other fallen soldiers of Latrun.

Dedicated to the memory of Hadassah Lempel, z”l

And to the memory of Menahem Talmi, who passed away in March, 2018

Many thanks to David Lang of the National Library’s Archives Department for his assistance in the preparation of this article. 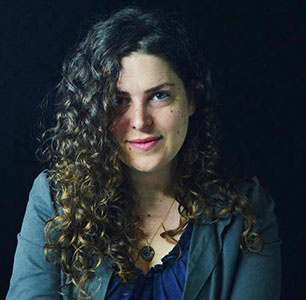 For more stories by Hadar Ben-Yehuda >>