When Jewish and Arab teams faced off against footballers from the Royal Air Force... 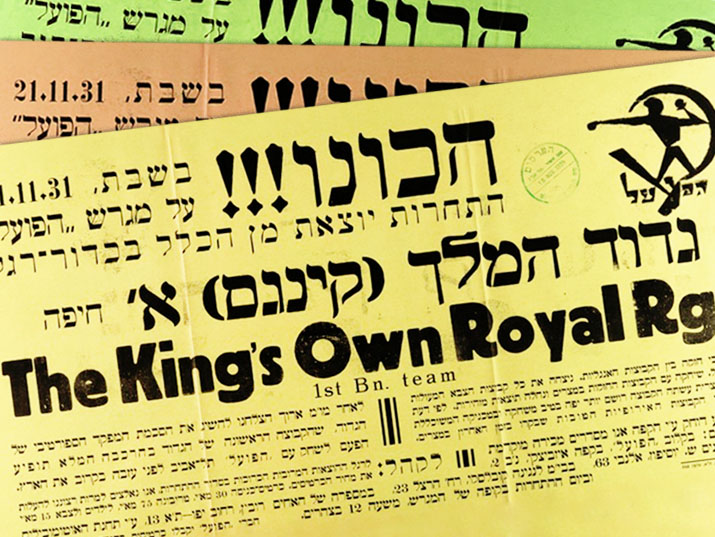 During the years of the British Mandate in the Land of Israel (1917-1948), thousands of British citizens including government, police and military personnel found themselves stationed in the region, living alongside its Jewish and Arab residents. Although football, (or soccer, for American readers) was played here before the British conquest, the sport received a significant push under the nation considered to be the birthplace of the game, as all three major population groups participated, each with their own football clubs competing against each other in tournament play. British, Arab and Jewish teams from this period had names such as The Paymasters, Shabab al-‘Arab and Maccabi Tel Aviv.

In 1928, the Eretz Israel Football Association was founded (at the suggestion of Egypt), and one of the conditions for its acceptance into FIFA was the inclusion of all population groups in the country. League matches were held between Arab, Jewish and British teams, and, in principle, if not always in practice, players from the three populations were even selected for an all-star national team that played against teams from other countries.

When thinking about the relations between population groups in  Mandatory Palestine, one tends to get the impression that a state of constant confrontation and conflict existed between Jews and Arabs. A similar image of hostility between the Jews and the British during the Mandate Period also comes to mind, mainly with regard to the struggle of Jewish groups such as the Irgun (Etzel) and Stern Gang (Lechi) against the British authorities, as well as opposition to British treatment of illegal Jewish immigrants (ma’apilim) during this period. Nonetheless, the sporting ties between Jews, Arabs and the British, as manifested in football, suggest that at least in the realm of sport, a single complex reality existed in which cooperation was the rule and not the exception. While national identity remained a key characteristic of sports in Mandatory Palestine, athletic events served as an arena for encounters between diverse communities.

This does not mean that the tension did not affect the relationships between athletes. For example, due to the protests sparked in the Yishuv (the Jewish community in the Land of Israel) following publication of the Passfield White Paper in 1930, games between British and Jewish clubs were halted; and in 1934, in protest against the treatment to which they were subjected, the Arab teams left the Eretz Israel Football Association, establishing a short-lived parallel organization of their own. It must also be noted, though, that crowds were known to extend warm receptions to teams from other population groups. For example, a newspaper report on a game between the Muslim Club of Jaffa and Maccabi Rehovot held at the Rehovot Soccer Field in 1941, stated: “The Arab team was welcomed with friendly enthusiasm by the football fans in Rehovot.” Throughout the Mandate period, the rulings of the Association were made in the spirit of good sportsmanship and without any evident bias in favor of the Jewish teams.

Football was played not only within the borders of Mandatory Palestine, but also on the international stage. Local Jewish teams were playing against clubs from Arab countries such as Egypt, Lebanon and Syria as early as 1927. No confrontations were reported in newspaper accounts of these games which were still taking place in the early 1940s.

Kicking Around during Wartime

Over time, a process of gradual separation between the Jewish football institutions and  clubs and those of the Arab and British sectors became apparent. This took place mainly during the period of WWII, when relationships with both the Arab and British teams  grew sour.

While games against “foreign” teams naturally came to an end with the departure of most of the forces and government personnel from the region at the end of the war, the decision to cease holding matches between Jewish and Arab teams was a political one taken by the Association.

In the 1942 League Cup games, Maccabi Haifa was scheduled to play against Greece’s Royal Hellenic Army team in the quarter-finals, but the Greeks left Mandatory Palestine prior to the game and Maccabi Haifa was automatically promoted to the next round. One of the three remaining games in the quarter-finals, between Maccabi Tel Aviv and Shabab al-‘Arab, ended with a victory for the Jewish team, which had added to its roster two players slated for conscription. As such an addition was forbidden according to the rules of the Association, Maccabi Tel Aviv was disqualified from tournament play. Nonetheless, it was not the Arab team that benefitted from this disqualification. Maccabi Haifa, which had already been automatically bumped up to the semi-finals, was now automatically placed in the final. Shabab al-‘Arab’s appeal of this decision was rejected by the Association. Following the decision, a conflict ensued between the Arab teams and the Association, leading ultimately to their renouncing membership in 1943 and establishing the Arab Sports Association in May 1944.

The story of football in Mandatory Palestine illustrates how at the personal level, as manifested in athletic encounters, hostile relations did not always prevail between the Arab population and the Jewish Yishuv, and between both of these groups and the ruling British. In the 1930s and 1940s, Jews, Arabs and others continued to meet on the football field, almost through the end of the Mandate Period. During these years, it can be seen how, gradually and unfortunately, football came to function increasingly as a tool for political struggles rather than for cooperation and coexistence.

When the Mayor of Jerusalem Begged the British: Let Me Surrender!