"I can't see you, but I feel you, and I know that you are happy, because you are in your homeland, which is being rebuilt." 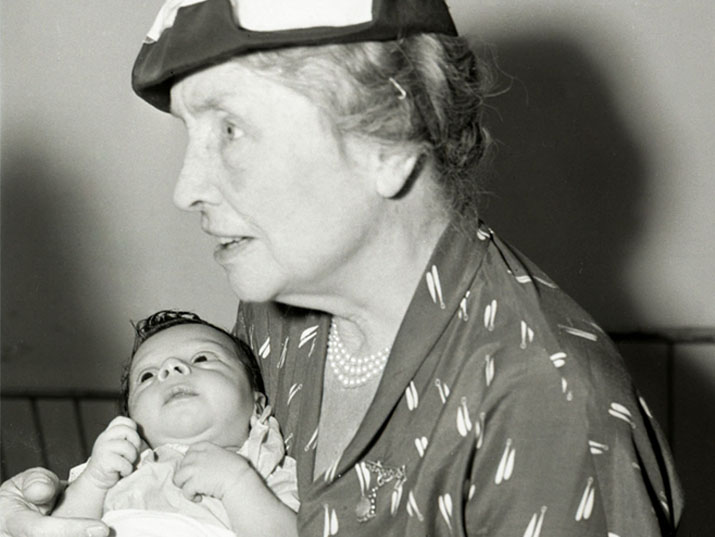 Helen Keller carrying an infant, the village for the blind at Kfar Uriel, photo: Beno Rothenberg, the Meitar Collection

The name of Helen Keller is known today throughout the world for her personal struggle as a blind and deaf woman. She became a social activist, promoting awareness and working to integrate people with disabilities into society. In the early 1950s, she even visited the young State of Israel as part of a tour on behalf of the American Foundation for the Blind.

Helen Keller’s visit in Israel in May 1952 wasn’t only for the purpose of meeting politicians in the Knesset or Prime Minister David Ben-Gurion in his home. Keller toured the country and met members of her community in Israel. “I can’t see you, but I feel you,” she conveyed through a hug to the children of Kibbutz Degania, who gathered around her car. “I know that you are happy, because you are in your homeland, which is being rebuilt.”

While visiting Jerusalem, Keller was impressed by the work being done at the Brandeis Center, where she received explanations regarding new methods of teaching the blind. She also visited the Hadassah nursing school. Keller was so impressed that she stated: “Israel is more advanced than the United States in its efforts to ease the suffering of the unfortunate.”

At the city’s Jewish Institute for the Blind (Beit Hinuch Le’Ivrim) a touching moment was documented, when Helen Keller walked through the door. “At the entrance to the house, the students of the institute handed her dozens of letters written in Braille, and Ms. Keller received their welcome as she hugged and kissed the students excitedly.” At the party held in her honor, Helen Keller couldn’t hide her exhilaration: “The dedicated care and work done to help the blind and deaf in this country, encourage me greatly, in my work for these people.”

A particularly interesting meeting took place at Kfar Uriel, which was actually founded as an experimental project, with the goal of integrating blind immigrants into various workplaces in nearby Gedera. Helen Keller visited the workshop in the village where, among other things, immigrants from Yemen and their families also worked, and was extremely impressed by what she encountered. She enjoyed meeting and talking with the blind Yemeni immigrants and encouraged them. At the local kindergarten, children greeted her with traditional songs. A Maariv reporter described the touching scene in Hebrew: “The deaf woman’s hands move in rhythm with the melody and you almost believe that she can hear. She places her hand on a toddler’s throat and ‘listens’ to the song. The child does not panic. A toddler hands her a bunch of daisies, receives a kiss from the elderly lady, and shyly blushes.”

Another important stop on Keller’s tour was the city of Netanya, where she made a special visit to what is today known as the Central Library for Blind and Reading Impaired People. After welcoming all those present, Keller turned to the books, running her fingers over the Braille script. She browsed through a work written by Stefan Zweig and when she felt the author’s name, she remarked, “A pity he ended his life so tragically.”

An interesting interaction occurred during Keller’s chat with the mayor of Netanya, Oved Ben Ami. Keller urged the mayor to employ the blind in industrial factories, to make use of their talent and precision: “In the United States there are 257 professions in which the blind are employed!”

Helen Keller summarized her fifteen-day visit to the Holy Land with inspiring and hopeful words addressed to Israel’s citizens: “I leave Israel greatly impressed by everything that is being done here. The flourishing cities, villages, and kibbutzim that are being built, the industrial factories and the happy, healthy faces of the children and youth – they all fill my heart with faith in Israel’s prospects for future development.”   If you liked this article, try these: The Exceptional Lilli Henoch: The Sad Story of a Champion Athlete When Marilyn Monroe Kicked a Ball for Israel (And Sprained Her Ankle) The Heroine Who Rescued Jewish Girls from Lebanon and Syria