Home > History of Israel > “Stranger Things” in Jerusalem: Goethe and Goebbels in the Ticho Family Garden
Land of Israel 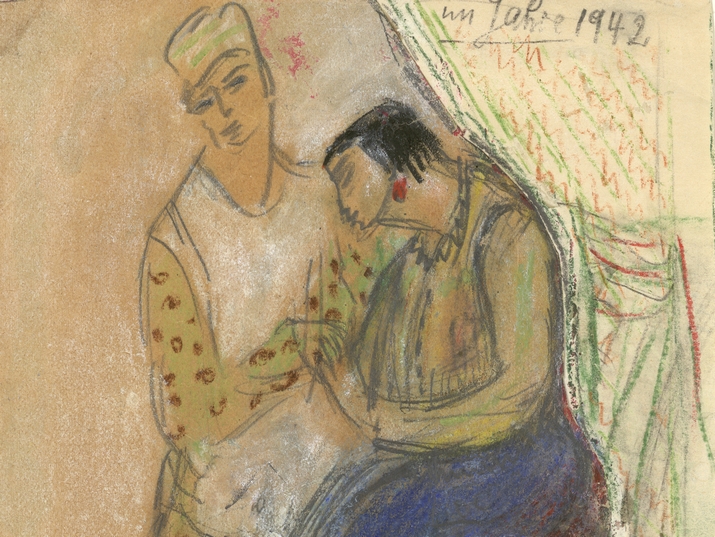 “The Banished Poet”, by Else Lasker-Schüler, 1942. The National Library collections

We may imagine the Ticho family garden in its heyday: a serene spot in the midst of a slowly expanding city, pine trees providing a sanctuary of scent and occasional shade; Patients of the famous eye doctor quietly erring across the garden path into the clinic, their companions catching a glimpse of Anna Ticho’s drawings and aquarelles; British Government officials, emigre intellectuals and local artists strolling the grounds while contemplating the state of the Mandate and of the escalating War in Europe.

Or we could delve into Else Lasker-Schüler’s version of this garden. In her play “I and I”, completed in Jerusalem in 1943, the poet conjures up a dystopic alternative to the eye doctor’s “tropical garden”. This “garden of hell” could be described as an early slapstick version of the “Upside-Down” – the parallel universe featured in Netflix’s “Stranger Things”. The writer Johann Wolfgang von Goethe is able to move between both gardens, while Goebbels, Goering and other figures are confined to the diabolical garden. The rest of the horrific yet humorous cast consists of Faust, Mephisto, Max Reinhardt, the poet herself, a scarecrow, the editor of the Haaretz newspaper, and other historical and fictional characters from the German literary and theatre worlds or from the country’s political and military elite.

The play itself was written during Else Lasker-Schüler’s period of forced exile in Jerusalem, after the Swiss Authorities had refused her re-entry to the country in 1939. By 1941, when she began writing “I and I”, she was already seventy years old and a distinguished poet and painter, although now deemed a “degenerate artist” by the Nazi regime. In Jerusalem she would publish her most famous poetry volume, “My Blue Piano”, through the Tarshish Publishing House in 1943. During these years she continued to paint and worked on her third play, which was not staged during her lifetime.

Her young admirer, the literary scholar and writer Werner Kraft, likewise a refugee from Germany since 1934, settled in Jerusalem’s Rehavia neighborhood, where he wrote his major studies on Karl Kraus and Rudolf Borchardt. Mostly working from the desk at his home, he wrote a journal chronicling and reflecting upon the fate of German-Jewish refugees amidst the urban and rural communities of the yishuv. His entries on Else Lasker-Schüler from these days include a passage from July 24th, 1941, in which he fittingly depicts the courageous and outrageous imagination of Else Lasker-Schüler, which reaches its creative peak in the play “I and I”: “She speaks of Wolfgang Ephraim Goethe, divides herself into Faust and Mephisto, lets the latter claim to have saved the former from the ‘bourgeoisie’. She lets the devil capitulate in face of this world of Hitlers, has Goebbels copulate with Mrs. Martha Schwertlein, and evokes all the magic of the old, noble Germany. She breaks grammar rules, sometimes writes in verse or in a “platt” everyday language, generates associative rhymes like children or the sick, yet with an overall effect of shattering greatness” (originally quoted in Marbacher Magazin 71, 1975).

Indeed, the play moves between past and present, Germany and Jerusalem, and even contains a play within a play. It portrays awe-inspiring literary magnets alongside the devils of their day. While Goebbels appears in the play as a diabolical pleb, the Nazi Minister had in fact impacted Else Lasker-Schüler’s personal fate, as she notes in several letters from the 1930s to friends and acquaintances. She names Goebbels as directly responsible for banning her works and inciting violence against her. These letters are scattered among the two main portions of her archive, kept at the National Library in Jerusalem and the German Literary Archive (DLA) in Marbach, Germany. Examples include letters she wrote to Emil Raas and Fritz Strich, which are kept at both archives.

In a long letter to Professor Strich from December 1934, for example, Lasker-Schüler bewails her last days in Berlin before fleeing to Zurich. She speaks particularly of Goebbels who vilified and haunted her on the radio, in newspapers and in pamphlets handed out on the street. She continues to painfully note how she was beaten in public, had stones thrown at her and was encouraged by her landlord to leave, since he no longer felt he could guarantee her safety. Upon arrival in Zurich she had no choice but to sleep six nights on a bench by the lake because none of her acquaintances were in town (letter kept at the DLA). The letter is sealed with a drawing of a female and male figure with a new moon hung above them and relates to brief descriptions of the poet’s recent trip to “The Land of the Hebrews” and the fantastical travel journal she was writing.

The fusion of fact and fiction in the above letter is repeated, albeit in heightened fashion, in “The Land of the Hebrews” and later in “I and I”. In the play, Lasker-Schüler also moves between real and imagined locations, all inhabited by historical and fictional figures from both the past and the present. The sixth act of  “I and I“ takes place in the “eye doctor’s garden” where the “princely poet” – Else Lasker-Schüler herself – converses with a well-read scarecrow who tells her of his past travels with Johann Wolfgang von Goethe, and Hermann’s Dorothea. The poet herself claims not to read much because she disdains the sound of pages turning. Among the many characters evoked and transformed in the play, the scarecrow in the sixth act takes on a unique, transgressive position – he is on the one hand a well-read, cultured figure who in the past accompanied literary giants, yet is now kept at the end of a “tropical garden” with no food at his disposal. This we may read as a reflection of the poet’s state: on her material and intellectual isolation in exile, her banishment into this “tropical garden” of Eretz Israel where tea parties and salon conversations take place, but from where she nonetheless longs for her past life.

The poet’s state in the world is an ongoing topic in Else Lasker-Schüler’s writing long before her exile, yet the “banishment of the poet” becomes a real and thematic trope in her writings and painting after 1933. The National Library holds many paintings and drawings of Else Lasker-Schüler, one in fact named “The Banished Poet”. It was completed between 1935 and 1942. Lasker-Schüler added the year “1933”, probably for symbolic value, as well as lines from her first poetry volume “Styx” from 1902 from which she frequently quoted to her friend and muse Ernst Simon in Jerusalem during her years there. The painting is both thematically and aesthetically typical of Else Lasker-Schüler during these years, when she was already complaining about pains in her arm but also insisting that she “must paint”. The iconic left profile features flat pencil strokes, with depth and color added by the use of red, blue and yellow crayons.

The appearance is Oriental, of course: apart from the Egyptian profile, the wide clothes and pointy shoes also remind us of the famous 1912 photograph from Berlin in which the poet is dressed as an Oriental prince, a figure that slowly emerges during these years in prose volumes like The Nights of Tino from Baghdad (1907) or The Prince of Thebes (1914).

The melancholic and perhaps even resigned recline of the poet’s figure in the painting preempts a far more confusing and deliberately split personality in “I and I”. Here the poet does not fold in the face of evil that conquers the world, or refrain from confrontation with the Mephistos, Goebbels or Goerings. Her fate and dealings with the world continue the paradigmatic Faustian split in the attempt to confront the forces of good and bad in the world. In the eye doctor’s garden, she glimpses her very own past, as well as Germany’s, in the hollow, hungry figure of the scarecrow. The playwright thus dangles the audience intermittently between metaphysics and history, between poetry and politics, between the hellish garden of Nazi horror and the estate of a renowned Jerusalem eye doctor.

This project promotes the arrangement and description of archives of German-Jewish scholars, writers, and artists and encourages archive-based research in the fields of Cultural Transfer, the History of Science, the Migration of Knowledge, and the History of Ideas. It offers junior scholars and students the opportunity to combine academic research with archival practice and provide an essential foundation for new cultural and scholarly discussions, by making previously inaccessible personal archives, literary estates, and historical collections available to international research.

Crossing the Divide: Walter Grab and the East-German Historical Establishment

A Murder in Mandatory Tel Aviv: The Orientalist as an Advocate

The Composer Who Angered the President of Israel