These photographs document the powerful earthquake that led to hundreds of deaths in 1927. 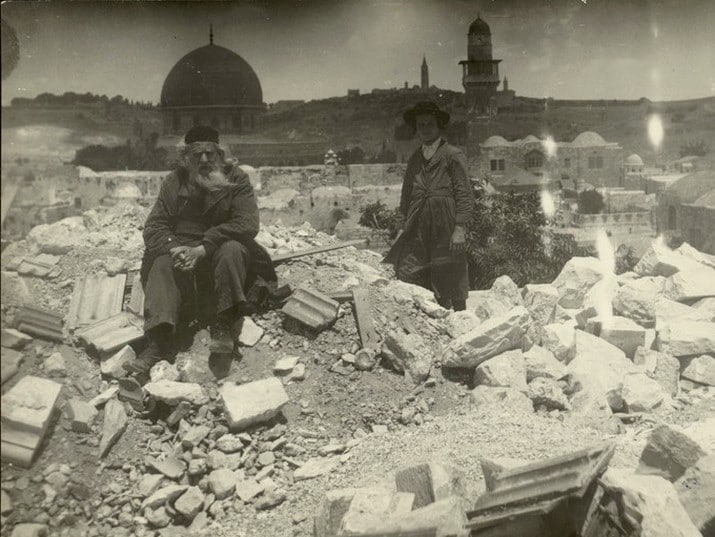 On the 11th of July, 1927, Mandatory Palestine and Transjordan were struck by a powerful earthquake. The tremor measured 7.5 on the Richter scale. This was the most significant natural disaster in the region in the past century, as well as a seismological research milestone – the first earthquake in the area to be documented by scientific instruments.

Hundreds of people were killed and hundreds more were injured. Damage to property was severe. Nablus, Ramla and Lod were heavily affected. Jerusalem, Jericho, Amman and Al-Salt also suffered, on a smaller scale. In Nablus alone, more than one hundred people were killed. In Jerusalem, the Hebrew University buildings on Mount Scopus were badly damaged, including Gray Hill House, the temporary home of the Institute of Jewish Studies.

That fatal summer saw preparations for construction of the Jewish National and University Library building on Mount Scopus. At the time of the earthquake, the precursor of today’s National Library of Israel was still located in its old building at Beit Ne’eman (at the end of Habashim Street – now Bnei Brit Street in Jerusalem’s Musrara neighborhood). According to one report, the Library building was not damaged at all and the books within were also unharmed. Life in the library continued as usual. To attest to this fact, only a few days after the terrible disaster, the library staff hastened to hold a small exhibition on the subject of historic earthquakes in the region.

Naturally, on the day after the disaster, the daily newspaper, Doar Hayom, devoted its pages, above all else, to the earthquake.

The National Library Presents: The Earthquake of 1837

On July 13th, alongside a feature on the damages caused to various public buildings in Jerusalem, was an announcement in the paper that the Library had put together an exhibit on the history of earthquakes in the Land of Israel.

This article gives us a rare glimpse into what was offered in the improvised exhibition put together by the Library staff. The majority of focus in the exhibition was on the powerful earthquake that had preceded that year’s quake – this was the famous earthquake of 1837 which mainly affected the cities of Safed and Tiberias.

What was displayed in the 1927 exhibition?

The article in Doar Hayom explained that the exhibition presented three letters sent from the Land of Israel after the 1837 earthquake. They were written by Mr. Israel Mashkelov, Mr. Aryeh Yerachmiel, and Mr. Raphael Yitzchak Alfandari.

It appears that printed versions of letters sent from the Land of Israel to members and officials of the Amsterdam Jewish community were presented at the exhibition. The original letters made a great impression on the Jews of Amsterdam at the time, and they rushed to publish them in a small, three-page booklet. The booklet was widely distributed throughout Europe and became well known in the Jewish world. In these letters the earthquake is described in great detail. They also include a list of the villages and towns that were affected by the natural disaster, as well as the number of dead and injured in each locale.

This was how one of the survivors described the disaster of 1837:

“On the 24th of Tevet, during the afternoon prayer, a great and terrible tremor rose up, and any who looked upon the land could see the shaking, and here [Jerusalem] some houses and courtyards were also damaged and the whole city was afraid, but thankfully no one was hurt. And in Nablus houses fell and all the shops and sixty people perished and not one of them was of the People of Israel thank the Lord, but in Holy Galilee, ahh! Safed and Tiberias were left in ruins…Fallen and destroyed were all the houses, and all the synagogues, the Sephardic community, the community of Hasidim and our community of Pharisees were destroyed, and no house or street or marketplace was longer visible, even the wall of Tiberias fell, a fire broke out and the Sea of Galilee flooded the city.

O that my head were (full of) waters and my eyes a fountain of tears, that I might weep day and night for the slain of the daughter of my people, for we have lost two hundred souls, and I have been sent the list of our remnant, left naked, except for those who went with me to Jerusalem and who had departed from there before…”

The article also reveals that the exhibition featured a first edition Jerusalem printing of the book Seder Avodat HaKodesh, printed after the Israel Back printing house moved its printing press from Safed to Jerusalem in the wake of the earthquake. The book deals with Kabbalistic issues and was originally written by Chaim Yosef David Azulai. The1841 edition was accompanied by an unusual introduction from the printer. Israel Back was one of the pioneers of the art of printing in the Land of Israel, and he saw fit to preface the book with a long apology. He tells of the hardships he suffered, which forced him to move his printing press from the city of Safed, which was destroyed in the earthquake, to Jerusalem.

Back’s “apology” gives readers of the book, almost one hundred and eighty years after its writing, a firsthand account of the devastation caused by the earthquake.

“…a great tremor which the Lord inflicted upon his land and his people… And the doorposts quaked from the voice of him who called, and the holy cities of Safed and Tiberias were destroyed and twenty-one souls were struck down in one moment. O that my head were (full of) waters and my eyes a fountain of tears, that I might weep day and night for the House of Israel … And it came to pass after that tribulation, the Children of Israel were dispersed to all corners of the Land of Israel …”

The Doar Hayom article, also mentioned another book displayed in the exhibition – Ahavat Tzion by Rabbi Simcha of Volozhin – which also adds to the recorded history of the earthquake in Safed and Tiberias.

The book includes an account of the 1837 earthquake described from a tourist’s point of view:

“And the doorposts quaked from the voice of the tremor and two hundred courtyards were ruined and in each courtyard several homes, some of which fell to their foundations…and some 120 souls perished. And before the tremor one Hasid of the Land of Israel was told that great trouble would come to Safed but they did not know what it was. They arranged prayers and study as is customary in our country, but our sins were such that the verdict was not torn. And some wise scholars were found dead with their faces on their books, and the Hasid was among them. And in the morning light they found a few more people alive, but several days later the tremor returned and some twenty more were killed.”

On March 5th, 1929, around a year and a half after the great earthquake of July, 1927, the following announcement appeared in Doar Hayom:

This public call was a success and the Library received an influx of very interesting photographs, creating a unique record of the damage caused by the earthquake in July, 1927.

What was captured in these rare images?

The most intriguing group of photographs is comprised of thirty-two silver prints of various sizes, which were apparently photographed with the same 6 X 9 cm camera. These photographs were taken by members of the “delegation” seen in some of the pictures. They captured the damage throughout the Land of Israel, as well as Transjordan. Members of this group (Mr. Reiser, Mr. Neumann and three members of the Badian family) traveled in their cars and documented the destruction caused by the earthquake. The captions were inscribed in Hebrew and English.

The photographs were donated to the National Library in 1929. Who were the five travelers who decided to tour the country and its surroundings in their car during the great earthquake? Unfortunately, no additional documentation beyond the names has surfaced to provide an answer to this intriguing question.

Another set of photographs includes 18 silver prints of various sizes, including photographs from the cities of Jerusalem and Nablus. The backs of some of the photographs are marked with the stamp of the German-based Internationale Foto-Aagentur press agency, as well as typewritten annotations in German. Apparently, these photographs were taken by various photographers and sent to the European press through the same news agency. 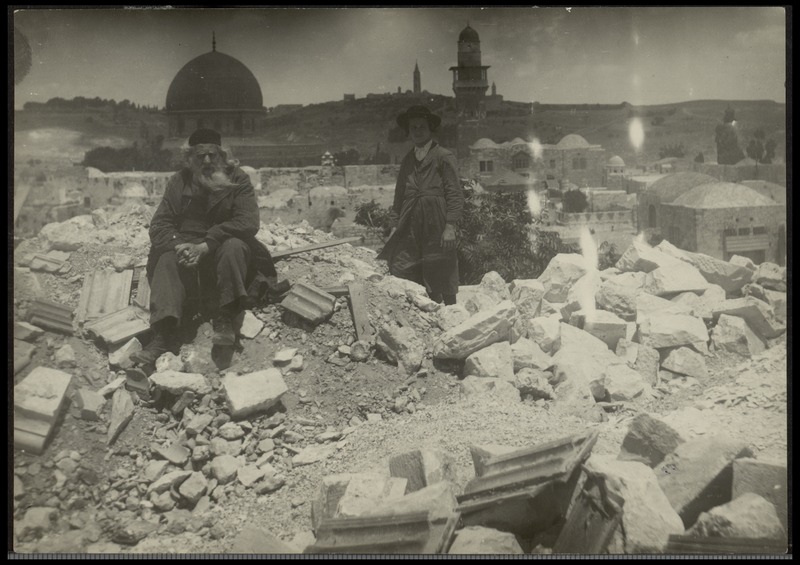 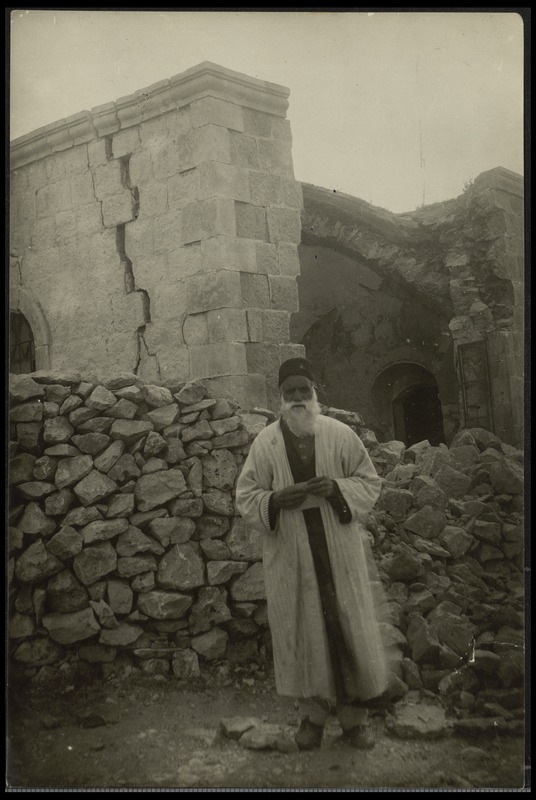 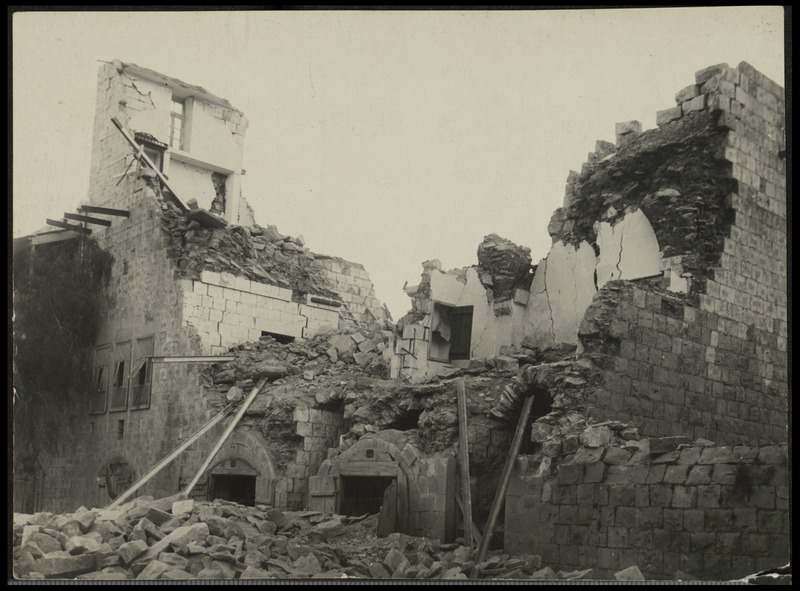 Three black and white photographs from the city of Nablus were accompanied by a poignant letter from Yeshayahu Blechman, a loyal reader of Doar Hayom: 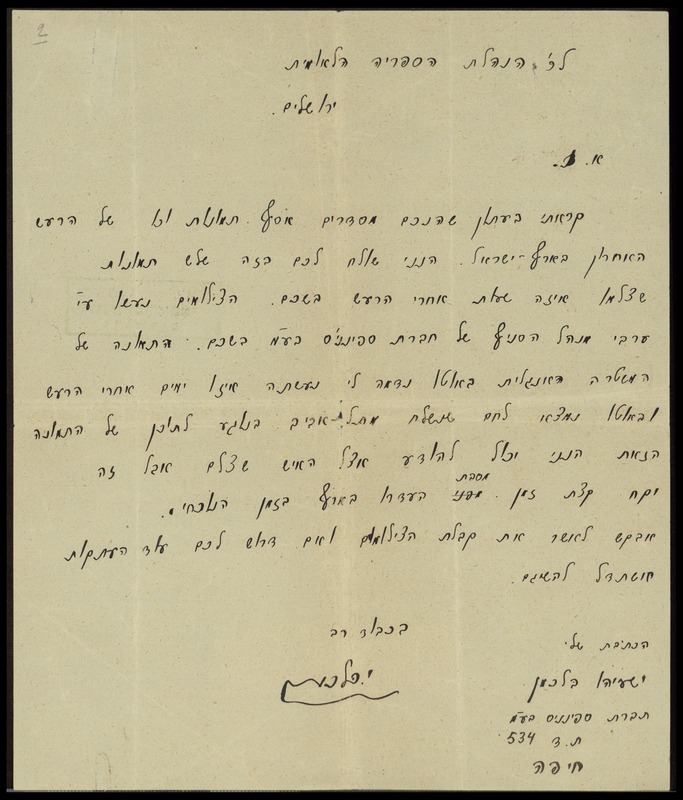 “… I am sending you three photographs that were taken a few hours after the tremors in Nablus. The photographs were taken by the manager of the Nablus branch of Spinney’s Ltd. The picture of the British police in the car seems to me to have been taken several days after the earthquake, and in the car we can see bread that was sent from Tel Aviv …” 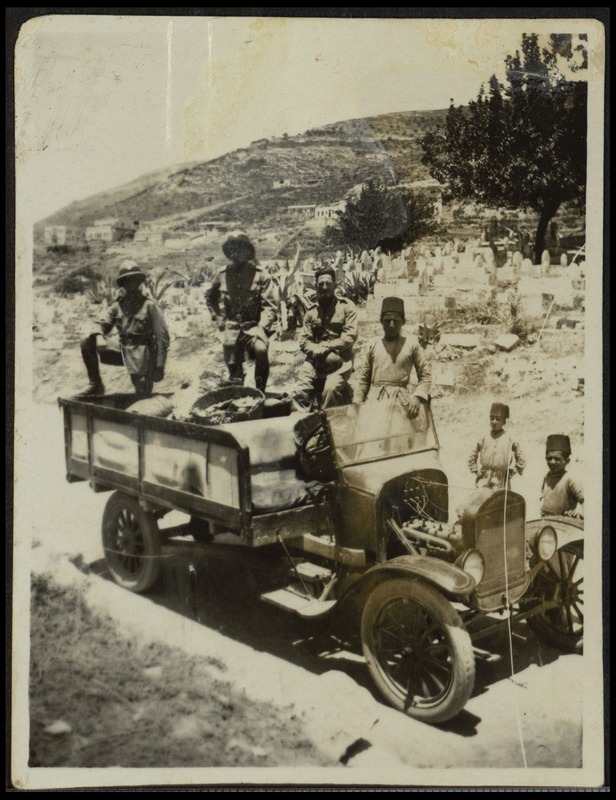 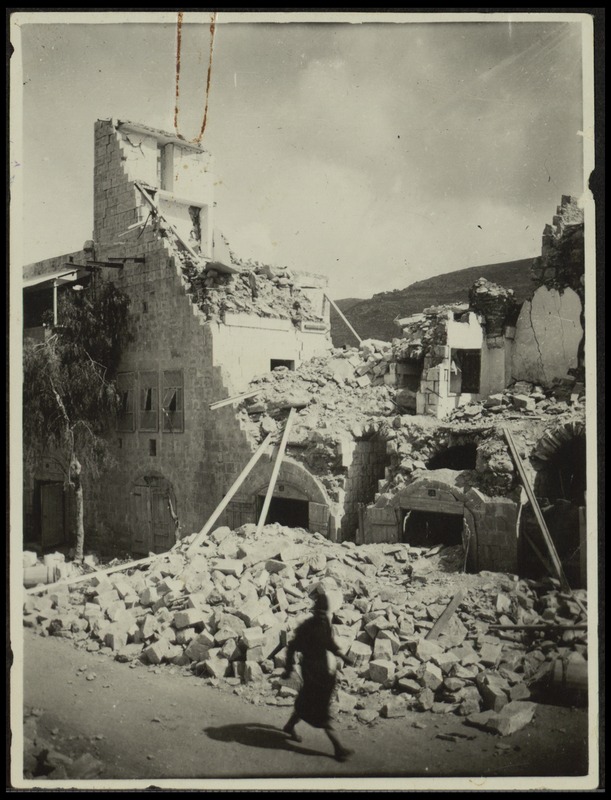 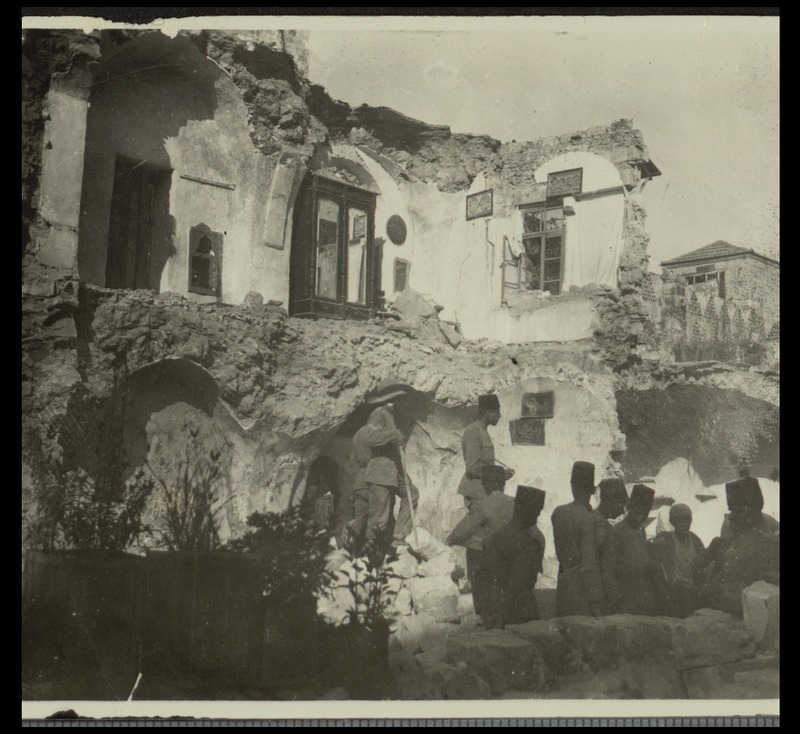 Spinney’s was a supermarket chain that maintained branches across the Middle East. The chain supplied most of the products to the British colonies. It is, therefore, possible to infer that the shipment of bread that arrived in Nablus (in an open truck, without any cover) was taken by a representative of this company, who ordered the shipment from the branch of Spinney’s in Tel Aviv. 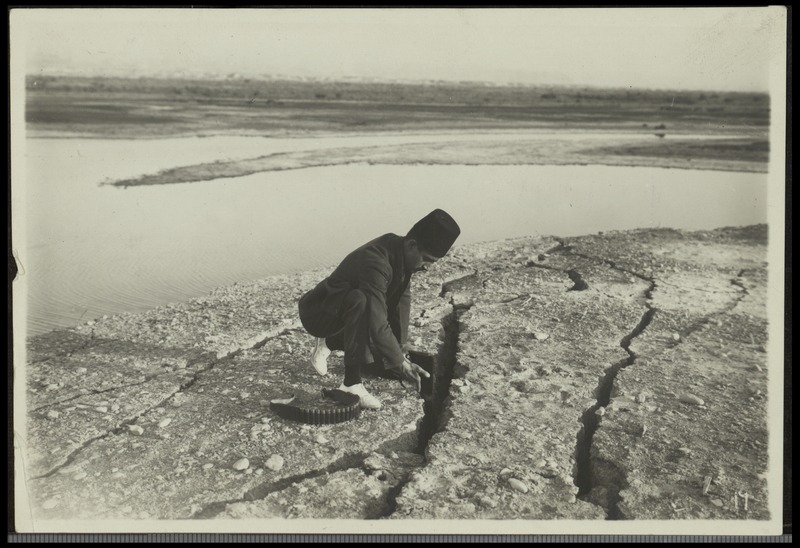 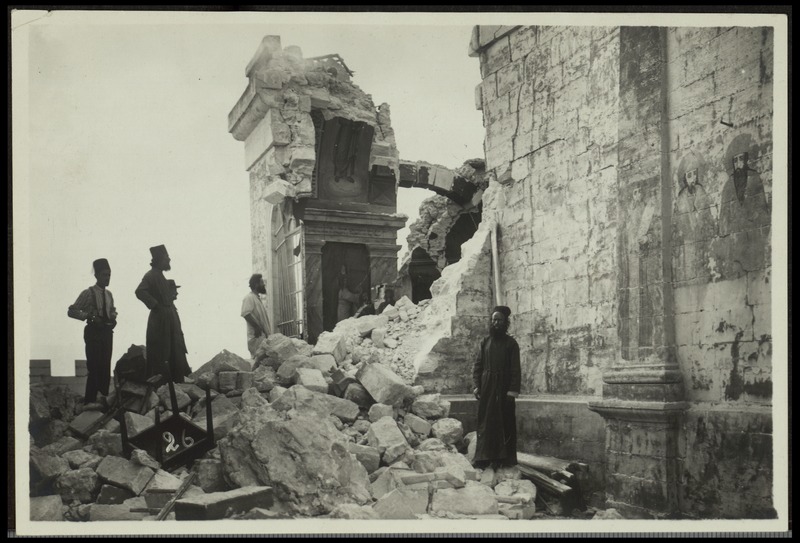 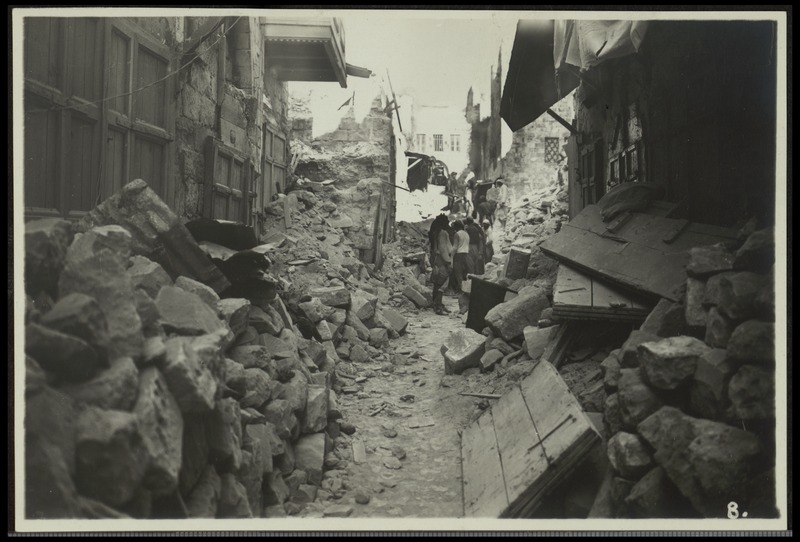 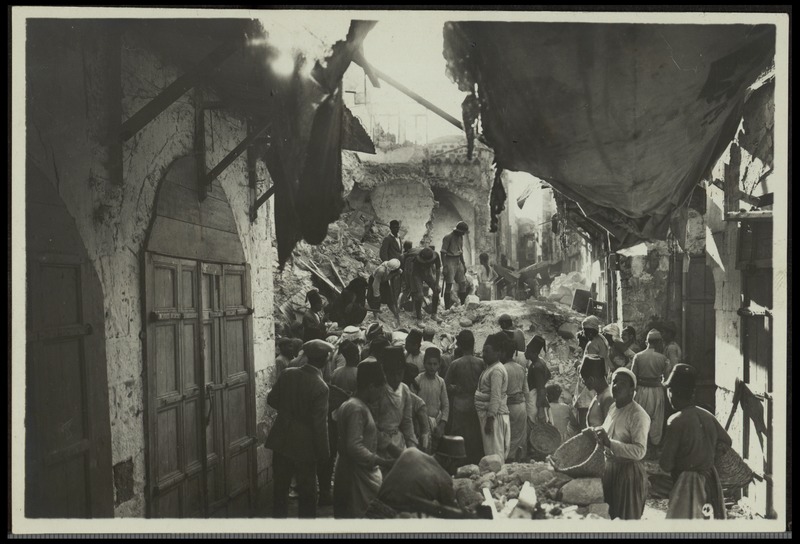 An Enthralling Journey: The Changing Land of Israel Over Three Centuries