When the Mayor of Jerusalem Begged the British: Let Me Surrender!

With the withdrawal of Turkish forces from Jerusalem, the mayor’s delegation set out to surrender to the British. Over and over, the mayor attempted to hand over his surrender, but his efforts were met with confusion and rejection. 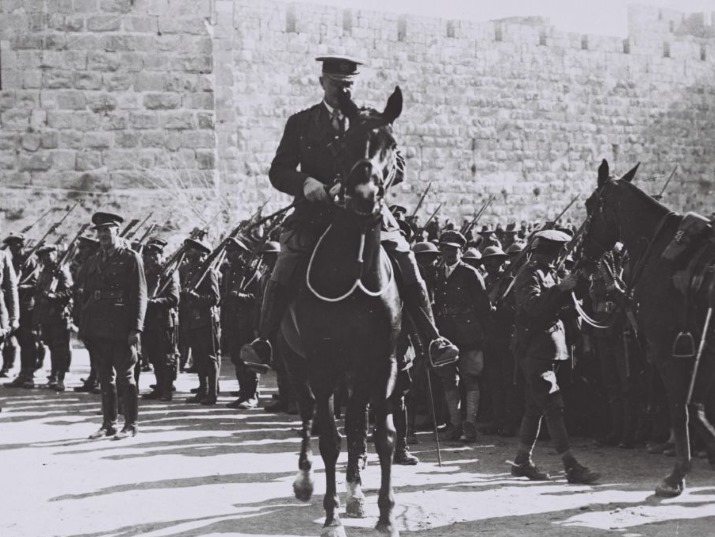 General Allenby near the Jaffa Gate, the general would dismount his horse and enter the city on foot. Photo: Eric Matson, GPO

One of the highlights of the British campaign to take the Land of Israel was more of a symbolic victory than a military triumph – the conquest of Jerusalem. The rapid advance of the British Army through the Sinai, into Gaza, and then to the outskirts of Jerusalem showed the Ottoman Empire that the military situation was all but lost. Ottoman forces in the city received an order from the high command: total withdrawal from Jerusalem was to be carried out on the 9th of December, 1917.

As Turkish troops retreated from the city in droves, Mayor Hussein al-Husayni organized an official surrender mission. The mayor passed through the city’s American Colony on foot, searching for a photographer to document the historic event. When the mayor came across the Colony photographer, Lewis Larsson, he called out to him, “I’m going to hand the city over to the English, bring the camera!” On the way, they stopped at the Italian hospital, removed a white sheet from one of the beds, and tied it to a broomstick. The white flag of surrender was prepared!

Now that everything was ready for a traditional ceremony of surrender, the only question left was – who should they actually surrender to?

Around five o’clock in the morning, the mayor’s delegation happened upon two British cooks. These men had been sent to procure eggs from a village outside of Jerusalem the previous evening, and had lost their way back to the British encampment. The mayor and his companions hastened to surrender to the two flabbergasted sergeants and presented to them, as representatives of the mighty British army, the official decree and white flag of surrender.

This unusual situation became all the more strange when the two sergeants came to their senses and refused to accept the surrender. They asked the dignitaries to postpone the affair for a few hours and to join them while they went to look for their commander. Jerusalem’s surrender to its new imperial overlords was put on hold.

As the cooks made their way to the camp, two more sergeants from a British scout patrol suddenly appeared, armed with rifles and demanding, at gunpoint, that the members of the delegation identify themselves. The mayor kept his cool and tried, for the second time, to surrender to two minor representatives of the great British military. The sergeants refused the delegation once again, demanding that they wait until their commander arrived. However, being proper English gentlemen, they did agree to have their picture taken with the city’s honorable dignitaries.

Several hours later, a Colonel Watson arrived and was presented to the mayor and his party. Watson considered himself to be of sufficient rank and status, and he agreed to accept the dignitary’s letter of surrender. At the end of the hurried ceremony, the colonel turned to the photographer and asked him, “Where can I have a cup of tea?” From there, the group continued to Shaare Zedek Hospital to celebrate the city’s surrender over tea and biscuits.

The next day Larsson the photographer brought the pictures of Watson’s formal ceremony to Major General John Shea’s headquarters. Recognizing the importance of the historical occasion, Larson asked the general about the proper way to transfer the photographs to London. “What pictures?” the general asked in incredulity. “Are you referring to the photographs from the ceremony in which I read the manifesto on the steps of the Tower of David?”

When General Shea heard about the events of the previous day from the photographer who had documented them, he was furious at Colonel Watson, who had accepted the surrender of the city on behalf of General Edmund Allenby. He ordered the photographer to destroy the pictures of Watson’s “unofficial” ceremony. He insisted that the “real ceremony of surrender” was the one that had taken place on the steps of the Tower of David.

Two days after Mayor al-Husayni’s surrender, the commander of the British Empire’s Egyptian Expeditionary Force, the officer now in charge of the entire region, arrived in Jerusalem. At the entrance to Jaffa Gate, General Edmund Henry Hynman Allenby descended from his horse and entered the city on foot, lest he be seen as a patronizing and cruel conqueror, looking down at the inhabitants from atop his steed.

Allenby abruptly nullified all previous surrender ceremonies and demanded that a third (or fourth, depending on how one counts) surrender ceremony be organized. Mayor al-Husayni was not present at this final ceremony on the pretext that he had contracted pneumonia on the day of the long surrender, two days prior.

Thus, in the absence of the mayor, the official ceremony of surrender was held in the city of Jerusalem. It was attended by General Allenby, leaders of the city’s various communities, and several thousand residents who came to see their new rulers. A few weeks later, Mayor Hussein al-Husayni died of pneumonia.

The quotations above are taken from the article – The Battle over the Photographs of Surrender by Dov Gavish, published in the book Jerusalem 5678, 1917/8: Destruction, Miracle and Redemption (Hebrew)

View These Rare Photos Taken Right After the Liberation of Jerusalem!

The National Library of Israel

The National Library of Israel (NLI) is home to the intellectual and cultural treasures of the Jewish people, the State of Israel and its region throughout the ages.

For more stories by The National Library of Israel >>