Postcards and coded letters sent from a concentration camp written in urine reveal the secret experiments performed on human subjects. 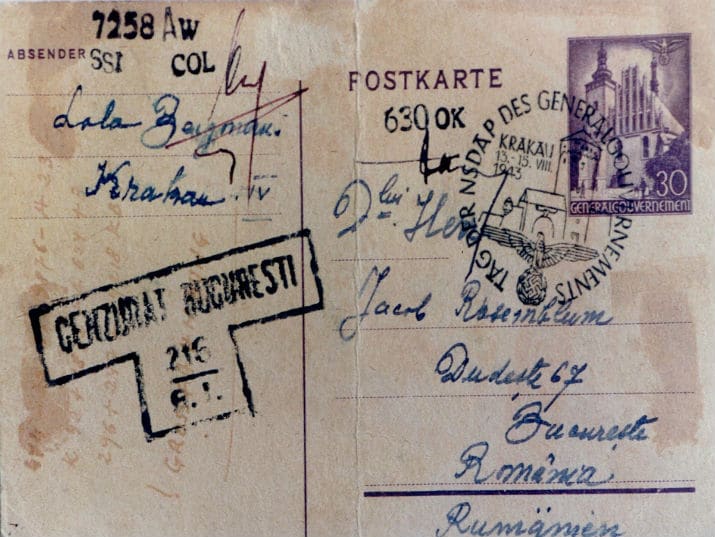 In a small museum in Poland there is a display of letters which reveal information on a series of Nazi experiments on humans subjects. These letters were written in invisible ink made from urine in the Ravensbrück concentration camp. The medical experiments were performed on Polish political prisoners. The letters were donated to the “Saints Under the Clock” museum in Lublin in Eastern Poland, by the family of one of the former prisoners, Krystyna Czyż-Wilgat.

During the Holocaust, Nazi Germany conducted medical experiments on humans – not only in the Auschwitz camp, but also in Sachsenhausen, Buchenwald, Ravensbrück, and others. Ravensbrück was a German concentration camp for women in northern Germany. Between 1939 and 1945, some 132,000 prisoners passed through the camp, including about 40,000 Poles and 26,000 Jews.

At Auschwitz, brutal experiments of marginal medical value were conducted, such as attempting to change eye color by injecting chemicals into the eyes of children. At Ravensbrück however, the experiments were designed to improve the health of German soldiers. Modern penicillin was not yet available and many German soldiers died of gangrene caused by infected wounds. In the attempt to find alternative medicines to cure infections, the Nazis implanted bacteria into the leg bones and muscles of soldiers by inserting pieces of wood or glass into the wounds. The human victims of experiments in the lab were called little rabbits. The experiments were also conducted on 74 Polish women, young and healthy, whose names appear in the 27 letters that contain hidden messages about the horrors of the experiments they were part of in the camp.

In the concentration camps it was forbidden to hold any personal belongings. Correspondence was permitted under strict regulation and with the scrutiny of censorship. It was possible to send letters from the camp that contained neutral information that was approved by the censors, but several prisoners managed, through the use of invisible ink made of human urine, to inform their families and the world of the shocking medical experiments being conducted.

The brilliant idea to write using urine as ink belonged to Janina Iwańska and was carried out by Krystyna Czyż who had a very clear and beautiful handwriting. Their extraordinary intelligence and love of literature was the key. In her first letter to her brother, Krystyna mentioned the period when they would read books together. She particularly emphasized the book, “Satan from the Seventh Grade,” by the Polish children’s author Kornel Makuszyński. In that novel, the hero sends a letter in which the first letters of each line of text, when put together, form a secret message. Krystyna also placed the words “letter,” and “urine,” in the overt text. Krystyna’s brother understood the intentions and knew what to do. That was how their secret correspondence began.

Janina Iwańska planned to escape the prison and wrote a secret text on the envelope containing a letter addressed to her father. The letter itself contained some clues indicating that the envelope held secret information written in invisible ink. Since the letter did not have a censorship stamp, it was likely smuggled out by prisoners working in the factories outside the camp. Once the letter reached its destination, the recipients still faced the task of reading the invisible text. The usual method was to heat the pieces of paper with the hidden text using an iron. Thanks to the encrypted messages, the list of 74 women from Lublin who had undergone medical experiments by Nazi doctors in Ravensbrück was made public in the first few years following the end of World War II. In addition to information on medical experiments which included the intentional infection of wounds for the sake of testing new drugs, the letters also contained information about the camp’s operations, punishments and executions.

In 1995, Yad Vashem received a postcard containing a message written in hidden ink to add to their collections. This seemingly innocent postcard was sent by a woman from Krakow, Poland, to Bucharest, the capitol of Romania in 1943. It contains a secret message written in invisible ink describing terrible conditions in a concentration camp. The postcard is part of a collection of letters and postcards, yellow patches and other objects which were donated to the  Yad Vashem Archives as part of the estate of Theodore Feldman, a Romanian-born Holocaust survivor who passed away in 1993. According to the donor of the collection, Elisheva Ezri, Feldman’s daughter, her father purchased the postcard in a small town near Bucharest. On the postcard, in addition to the addressee and the address, there is a short text is spread out along two lines and written in German: “My dear, I’ll remember you with love. Lola, Krakow, 20.8.1943.”

The sender of the postcard was Lola Bergmann of Krakow. Her address did not contain a street name. The recipient was Yaakov Rosenblum, who, according to the address, lived in the Jewish ghetto in Bucharest. The invisible message included was sent by a man called Otto. The text, written in invisible ink, was in German and contains inside information about one of the concentration camps in the area, incuding details of a well-organized underground movement. The letter even contained a request for aid and equipment suitable for advanced underground warfare conditions, which lends to the theory that this was a part of an espionage operation on behalf of the Allies.

The postcard bears the stamp of the Romanian censor, indicating that it had indeed reached Romania, but it is unclear whether it was read by the addressee or not. According to Elisheva Ezri, Feldman himself made the secret text visible by heating up both sides of the postcard with a household clothing iron. If that is the case, it can be concluded that the postcard did not reach the destination or that if it arrived, it seems that it was not clear to the recipient that it contained a message written in secret ink. In addition, the ink may belong to a group of chemicals that can be removed and then made visible when it comes in contact with another chemical. There are many materials and recipes for manufacturing hidden ink and many methods for making the hidden text visible. The use of secret ink for transmitting secret messages was already well known during World War I, and the censor was alert to this even during World War II. Across the postcard is a thick, light brown line. This line attests to an attempt to discover the hidden text using chemical material. Was the hidden text of the postcard visible and therefore caught by the censors? Or was it able to evade censorship because censorship checks could not identify the secret ink?

The contents of the hidden text and its interpretation, including the attempts to discover the identity of Otto, were presented at length on pages 6-7 of issue No. 7 (fall 1997) of Yad Vashem Magazine.