Crossing the Divide: Walter Grab and the East-German Historical Establishment

The Vienna-born Israeli historian Walter Grab was among the few to venture across the academic Iron Curtain in pursuit of his research...This is the story of his unique relationship with East German scholar Heinrich Scheel 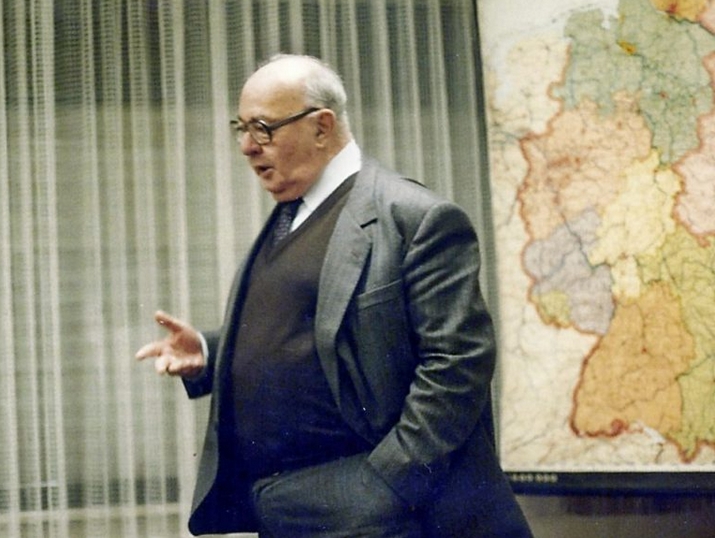 “Are there any other studies published in East-Germany, with which I am not familiar?” wrote Walter Grab, a Viennese-born Israeli historian, to his East-Berliner colleague Heinrich Scheel in August 1971. “Professors Steiner and Markov did not know of any,” he continued, “but here you are the uppermost authority”. By ‘here’, Grab meant East Germany. When he first entered the field of historical research dedicated to the study of German Jacobins, his colleagues considered him a representative of the West, if not a West-German historian proper. Some addressed him in person as the initiator of West-German scholarship on the German Jacobins. Eventually, this was not too far from the truth, given that Grab published his works exclusively in German, and that up until the early 1960s, his field of expertise hardly existed in West-German academia. Apparently, the field had to be invented or at least reintroduced, if it was not to remain an exclusively East-German scholarly endeavor.

Grab himself could not deny his somewhat soloist positioning within the western context, he even fancied its benefits. “There are no true experts in this field in the Federal Republic”, he wrote to a young German scholar, Helmut Haasis, who sought his aid and collaboration in the late 1960s, as a forerunner in the field. For sure, he considered himself the right man for the task. “Is it not also natural, that I, myself a victim of persecution, [am] the first to stimulate the study on the Jacobins in the Federal Republic?” he later reflected. Grab’s positioning was unordinary indeed: a displaced historian of misplaced histories. One who considered himself, as Dan Diner noted, an exiled Jew in the land of Jews, fully devoted to retrieving the roots of failed attempts to constitute a democratic tradition in Germany during the late 18th and early 19th century, following the tides of revolution.

Grab first won recognition as a documenter of the influence and impact of the French Revolution in Germany, following the appearance of his book in 1966 on the Northern-German Jacobins (Demokratische Strömungen in Hamburg und Schleswig-Holstein zur Zeit der Ersten Französischen Republik). This was an elaboration of his dissertation, completed shortly before (at the age of 46) at the University of Hamburg, supervised by the by then already controversial figure of Fritz Fischer. When he first received his doctorate, East-German research on the effects of the French Revolution in Germany, German Jacobins and demagogues and early German revolutionary literature and theater was rather well established and lead by historians and literary scholars such as Walter Markov, Gerhard Steiner, Karl Obermann, Helmut Bock and Hedwig Vogt. Above all, the study of the German Jacobins was tied to the figure of Scheel, a historian committed to the ruling socialist party in the one-party state, and a long-term member of the East-German academy of sciences in Berlin. In 1962, Scheel published an extensive volume on the South-German Jacobins, and earned his place as an expert in a scarcely populated field. Grab, who, albeit ideological differences, acknowledged the pioneering role played by East-German scholars in the study of early revolutionary democracy, established close contacts with all relevant figures in his field, including Scheel. Given the gloomy reality of Cold-War rivalries, this was not all too common. Repeatedly he insisted to his West-German counterparts that without collaboration with East-German scholars and without an acquaintance with exclusive materials kept in East-German archives, no serious progress in the study of a neglected German democratic tradition could be made.

While cataloging Grab’s personal archive for the National Library in Jerusalem, as part of a collaborative research project conducted by the Franz Rosenzweig Minerva Research Centre and the German Literature Archive in Marbach, I came across revealing footprints of an allegedly East-West exchange enterprise. These footprints, highlighting an entanglement of political constraints, ideological obligations and professional profit, provided for a larger picture of the relationships between the German-speaking, formerly light-communist Israeli historian, and his East-German counterparts, completed by institutional correspondences kept in the historical archives of Tel-Aviv University. Especially interesting in this regard is his correspondence with Scheel. At the time when Grab first appeared on the academic stage, Scheel, only slightly older than him, was much more versed in the study of a shattered German democratic past. However still, Grab managed to utilize the geographical division in their areas of study (Scheel was ‘in charge’ of southern Germany, Grab of the northern parts), along with Scheel’s geo-political and cultural isolation, in order to balance-out the power equation between them and act accordingly. 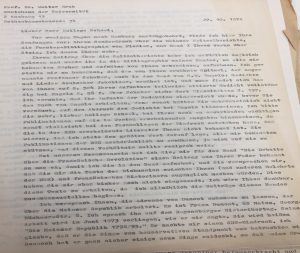 The partnership between the two set off in 1963. They met in East Berlin, and Scheel offered his Israeli colleague considerable help in negotiating with East-German archives. Later on, Scheel even offered a joint research project, whose results were to appear in an East German academic journal in 1967. This was a huge opportunity for Grab, which never materialized. That very year marked the harshening of East-German policy towards Israel following the Six Day War, and the German historian decided not to risk breaching the party line. Thus from very early on, the political sphere made it very difficult for this partnership to succeed. Nevertheless, Grab, for his own sake, and for the sake of beneficiaries from all sides, sought to make sure that the professional, political and ideological gaps remain somehow manageable. “I will continue my efforts in keeping you updated with regards to new publications in the West”, he wrote to his East-Berliner colleague in October of 1972, “and would appreciate it if you could do the same. […] Inobservance or lack of knowledge of researches on both sides,” he further added with a pinch of discontent, “is only harmful for scientific insight, and creates unnecessary tensions between scientists, who should otherwise be on friendly terms with each other.” 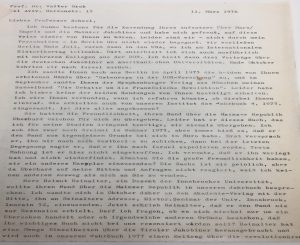 However keen, there was only so much Grab could do to prevent global politics from intervening in their partnership. As ideological disagreements between the two sharpened towards the mid-1970s, the burden grew heavier to carry. Scheel, taking more than a step back, began questioning whether Grab’s works on the German Jacobins were not “imperialistically misused” by West-German institutions of higher learning. Grab replied to this accusation in a letter from March 1976. As a sign of his willingness to overarch political obstacles, he stated that he would not mind publishing his works in the journal of the Academy of Sciences in East Berlin (Das Jahrbuch für Geschichte(, and that he was by no means shy of crossing communist thresholds, “But the gates to which are shut, as you may well know, and especially after the Six Day War” he wrote. “My willingness, to also publish in the GDR,” he added, “differs me doubtlessly from those systemkonservierenden West-German historians, who criticize my works in the Frankfurter Rundschau.” The correspondence between the two, which recently arrived in Jerusalem, is very telling in regards to understanding Grab’s unique positioning as an émigré scholar and outsider, with its obvious benefits and less apparent limitations. On the one side, there were no institutional constraints which could hinder him and prevent him from promoting his research in the name of preserving a united front. On the other, perceived as a voice from the outside, Grab apparently had to negotiate his stance and accept the fact of being ideologically ‘marked’ by both sides, in order to be considered a legitimate participant in a highly charged field of historical investigation.   Walter Grab’s archive is preserved at the National Library of Israel

This project promotes the arrangement and description of archives of German-Jewish scholars, writers, and artists and encourages archive-based research in the fields of Cultural Transfer, the History of Science, the Migration of Knowledge, and the History of Ideas. It offers junior scholars and students the opportunity to combine academic research with archival practice and provide an essential foundation for new cultural and scholarly discussions, by making previously inaccessible personal archives, literary estates, and historical collections available to international research.   If you liked this article. try these: A Murder in Mandatory Tel Aviv: The Orientalist as an Advocate What Did Freud Really Think of Zionism? The Enigmatic Researcher of the Magic of Music