It was 1937 and publisher Salman Schocken was looking for an original gift for his friends. The result: 40 spectacular photographs capturing the cities and landscapes from the skies. 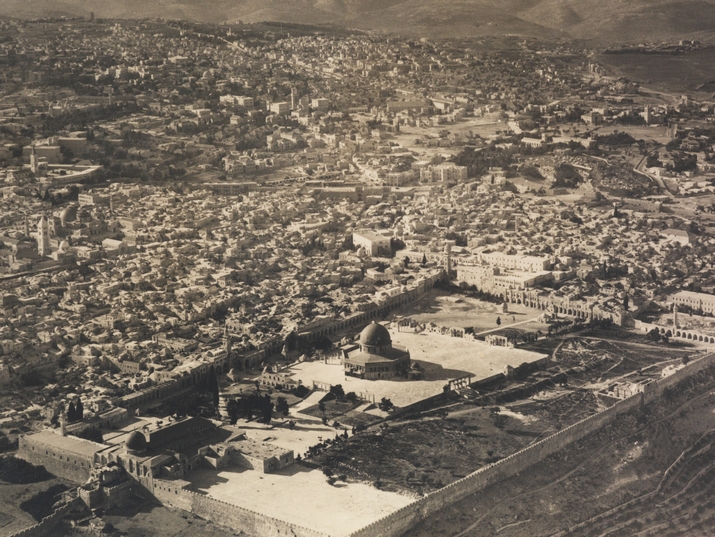 Deep within the archives of the National Library of Israel, an unmarked cardboard box wrapped in fine linen contains 40 high-quality aerial photographs taken of pre-state Israel. A yellowing piece of paper sits atop the photos, with a brief inscription in Hebrew and German revealing the story behind their production.

The photography project was the result of a unique collaboration between a successful publisher and one of Israel’s greatest photographers. The goal was to produce the first-ever set of aerial photographs of the Land of Israel taken for nonmilitary purposes.

What does the yellowing inscription tell us, and who are the men who created this unique album just over 80 years ago?

Against the backdrop of the violence of the Arab Revolt in Israel and Hitler’s edicts in Germany, a celebration was held in Jerusalem on October 23, 1937, marking Salman Schocken’s 60th birthday. On the second floor of his library, a building that had been planned by renowned architect Erich Mendelsohn, Schocken gathered a small group of colleagues and peers. A tough and powerful businessman, Schocken had few real friends but many wanted to extend their best wishes to this affluent man who was a patron of Hebrew literature and who had brought together the greatest creative minds in the burgeoning local Jewish community.

Schocken’s public status in pre-state Israel was at its height. He held senior positions at the Hebrew University of Jerusalem and the Jewish Agency and he had just purchased Haaretz – one of the most important dailies in the Land of Israel, which his son, Gershom Schocken, would then edit for 50 years. Salman Schocken devoted most of his energies toward cultivating original and innovative cultural experiences – first and foremost through his collection of Schocken Books.

Author S.Y. Agnon headed a group of writers who “adopted” and looked out for Schocken, who in turn generously supported them. Haim Hazaz, Shaul Tchernichovsky and other artists received handsome stipends from him in exchange for exclusive rights to their work.

While Schocken’s endeavors on behalf of literature are well-known, little has been written about his initiative to photograph Israel from the skies. Schocken’s collaboration in 1937 with Nachman Shifrin, owner of the Orient Press Photo Agency, left a unique mark on Israeli photography.

Just four years prior to the collaboration, Nachman Shifrin sold his large press photo agency in Berlin and immigrated to the Land of Israel along with one of his best photographers, Zoltan Kluger. Four months after Hitler came to power, Nazi restrictions on the activities of Jewish photographers had led Shifrin to the conclusion that he must get out of Europe. He also understood that the national institutions needed professional photographs for the developing publishing industry.

Shifrin was a talented entrepreneur and a shrewd, resourceful businessman. What he was not though, was a photographer. He entrusted the photography know-how to Kluger, a modest and highly skilled photographer from the Hungarian city of Kecskemet, who had worked in Berlin since the 1920s.

The technical and artistic quality of Kluger’s work led him to become the preferred photographer of Keren Hayesod and the Jewish National Fund soon after his arrival in pre-state Israel in November 1933.

Shifrin and Kluger’s immediate success did not prevent them from seeking out new, additional ventures even though this created ill will from other photographers in the field, but a new wave of immigration from Europe (the Fifth Aliyah) included a large group of photographers, some of international renown, which led to greater competition among the photographers.

Shifrin grew concerned by the other photographers’ complaints that Kluger was enjoying too much exclusivity in working with the national institutions. This led him and Kluger to seek other ways to showcase their superiority in the field including the daring venture they pursued that would literally allow them to look down upon their rivals.

So who came up with the actual idea of taking the aerial photographs? Could it have been Kluger, who had served as a photographer in the Austro-Hungarian air force in World War I? Or was it the exuberant entrepreneur Shifrin who first thought of it? Or, perhaps it was Schocken who was widely known for his original ideas in the field of advertising. The answer remains unclear.

What is known is that Schocken was the key figure in the initiative to hire a civilian aircraft and document pre-state Israel from above for the first time. Until this initiative, aerial shots had been take only for military use, through the auspices of the German and British Air Force during World War I. Schocken was able to hire a private plane through Aviron – the first “airline” in pre-state Israel – and let Kluger work his magic.

All of these images were novelties in the pre-state Israel photo album, but the crowning glory of the collections was Kluger’s aerial shots of Jerusalem.

In a gesture (or perhaps in response to a specific request) to the project’s patron, Kluger photographed Schocken’s home and library – the luxurious buildings designed by Mendelsohn on the outskirts of Talbieh that had been inaugurated shortly before the photos were taken.

One of the most amazing details in the Schocken house imagery is the private pool and the surrounding landscaped garden, designed by a gardener brought in from Germany specifically for the task.

These photographs are important documents for the study of the Jewish portion of Jerusalem during the Mandate era. There are also marvelous aerial shots of Mount Scopus which include the original National Library of Israel housed in Wolfson House.

Jewish philosopher Martin Buber once said, “The older we get, the greater becomes our inclination to give thanks, especially heavenward.”

Schocken, an admirer of Buber’s, also adopted this worldview and wished to thank his many well-wishers. The process of sending out his thank you gifts was largely delayed – thanks in large part to the publisher’s meticulous attention to detail – but Kluger’s aerial shots were eventually gifted.

The series of high-quality silver prints were mounted on cardboard and packed carefully inside a box. Schocken then added a page of writing in both German and Hebrew: “I am pleased to send you, albeit belatedly, a collection of aerial photographs of the Land of Israel as a reciprocal gift for the generous present I received from you in honor of my 60th birthday.” Beneath the dedication, Schocken added a few words in German in his own scrawl and signed it. 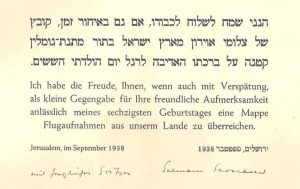 The careful production of the photos (which only added to the time delay) would have been quite an expensive endeavor. Schocken, a sensible businessman who was always careful with his money, produced a limited number of the albums that contained 40 hand-selected images. He also produced two mini-albums, which contained a smaller collection of six to 12 photographs apiece. Several copies of these albums are now preserved in the National Library of Israel archives. A few albums also lie in the personal archives of some of Schocken’s close associates.

The advent of World War II led to restrictions on civil aviation in pre-state Israel, and aerial photography was banned. Consequently, the Schocken, Kluger and Shifrin project ended up being the sole nonmilitary documentation of the country for many years.

Even today, 80 years later, the collection’s beauty and quality continues to amaze and inspire us.

A Moment Before Desolation: Rare Photographs of Polish Jewry