A Year After the Balfour Declaration and Still No State?

A letter sent by a soldier in the Jewish Legion in 1919 gives us a glimpse into the depression and despair felt by the youth of the Land of Israel at the end of the war which "liberated" the Land of Israel from Ottoman oppression. 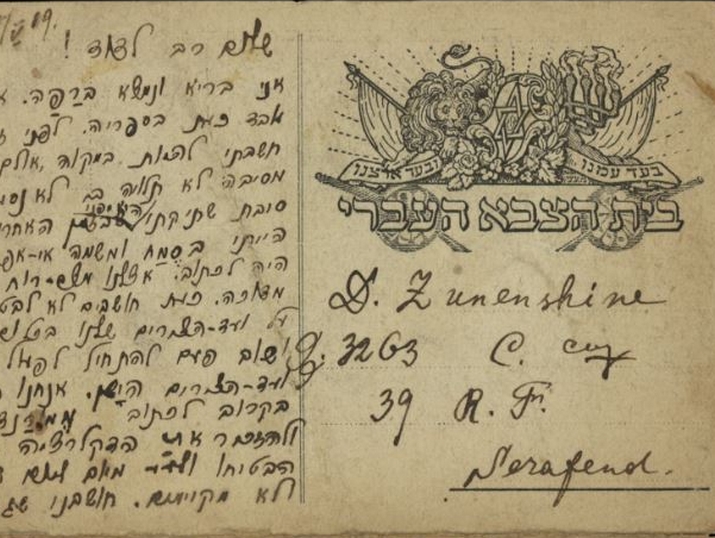 17 year old Moshe Feldstein arrived in Israel in 1913. Life in the undeveloped poverty-struck country was certainly not easy for a young man who came from the Ukraine, but these conditions did not prevent him from taking part in building the Land, and when the time came – from enlisting to defend and liberate it from the Ottoman Empire.

In 1919, Feldstein sent a letter to another enlisted friend named David Zonenstein. The war had ended a year earlier and Feldstein, who was stationed in Rafah, found himself predominantly bored. His letter is a fascinating historical document – testimony from a critical period in the history of the Jewish Yishuv. But before we peek into the soul of a soldier in the Jewish Legion at the end of the First World War, we should first clarify what this Legion was and who enlisted in it.

“For our nation and our land”: From the Zion Mule Corps to the Jewish Legion

The first incarnation of the Jewish Legion was given a singularly unimpressive name. It was known as “The Zion Mule Corps”. At the end of the first year of the “Great War”, Joseph Trumpeldor and Ze’ev Jabotinsky, from their place of exile in Egypt, came up with the concept of the battalion. When the idea began to take shape, the pair disagreed about the extent of the achievement. Trumpeldor was satisfied, Jabotinsky – much less so.

Jabotinsky fought for the establishment of a Jewish combat military legion for over two and a half years. In contrast to the Zion Mule Corps who were stationed in Gallipoli and had combat service support roles, Jabotinsky envisioned a Jewish battalion which would fight and liberate the Land of Israel itself.

In August 1917 some of Jabotinsky’s demands were accepted, when he was one of the founders of the first Jewish Battalion of the British army. The British army’s capture of the south of the Land of Israel in December 1917 provided him with the impetus he was waiting for. From January 1918, multitudes of young men from the Land of Israel enlisted in units which were given the name “The Jewish Legion”. But even now, when the waves of enthusiasm from the Balfour Declaration and the surrender of Jerusalem had not yet subsided – the enthused soldiers’ dream did not materialize. Three different units were established: British, Land of Israel and American. With the exception of the conquest of the Um Al-Shart Bridge in the Jordan Valley, the legion’s soldiers carried out a series of combat service support roles – mainly guarding prisoners of war and non-combative patrolling.

And what is in the letter?

The letter begins with the really important information: “I am healthy and am in Rafah. I currently work in the library.” After these two lines, the idyllic description ends. “Our mood is dejected” and it seems we have no one left to trust. The Zionist leadership, the Committee of Delegates led by Chaim Weizmann, was revealed to be a group of activists who the soldiers in the camp “now think we should not trust”.

Despairing and depressed, the soldiers discussed the possibility of writing a memorandum “and to mention the declaration which they”, referring to the British,” just made and which they are postponing from day to day and not fulfilling.”

What declaration is Feldstein referring to? We find support for our speculation that this is the Balfour Declaration in a sentence he wrote on the side of the letter “There is a cartoon which shows Balfour. He is asked: ‘What’s new with the declaration you gave to the Jews?’ Balfour sits down and replies: ‘My mistake…'”

This assertion is nothing less than astonishing – less than two years have passed since the Balfour Declaration guaranteed that “His Majesty’s Government view with favor the establishment in Palestine of a national home for the Jewish people” and the entire country was now captured by the British army. Despite these historic developments, the youngsters in the camp in Rafah had totally detached themselves from the waves of enthusiasm which swept through the entire Jewish world.

Did they express a prevalent feeling in the Yishuv at such an early stage of British rule in Israel, before the Mandate had even been firmly established? Or should the reason for their doubts be attributed to another cause? Feldstein’s letter does not provide an answer to this historical question, but we can postulate.

Visualize a group of young Jews, full of purpose and with a sense of mission who go out to battle in order to free the parts of the Land of Israel still awaiting liberation. Fast forward a few months until the “Great War” ends, now, after its end, we find them scattered in camps far from home – with no state or even a single heroic tale to impress the girls back home. Little wonder they were depressed.