The end of the First World War left Jerusalem devastated and impoverished. Hundreds of women from the Jewish Yishuv were compelled to find work in prostitution. 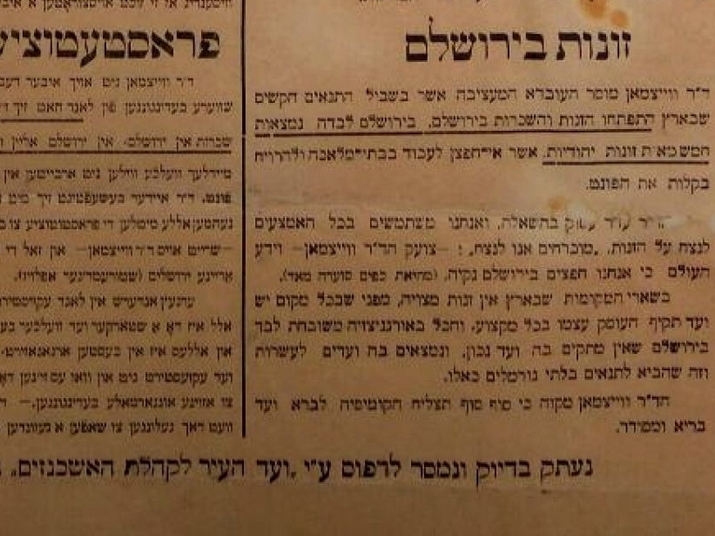 At the end of the First World War, the city of Jerusalem was left devastated and impoverished. Life in the shadow of deprivation, destitution, and unemployment compelled many women of the Jewish Yishuv, some of them young girls, to work in prostitution. While the city’s Jewish committee wasted its time on discussions on searching for a culprit, the city’s women rolled up their sleeves and set about diminishing the terrible phenomenon. Despite the opposition and derision that surrounded them, it was their actions that practically eradicated prostitution from Jerusalem.

“In the month of February,” reads the short news bulletin published on August 21, 1919, “twelve young unemployed girls aged 12-14 began to work in a vegetable garden under the supervision of a professional laborer.” The seemingly innocent article concealed more than it revealed.

The First World War years were especially trying for the city of Jerusalem. Despite being captured by the British with not a single shot fired, the rule of the new empire on the block was preceded by four long years of suffering and poverty. The Ottoman Empire, which made little effort to develop the Land of Israel, considered the Jews of the Land – especially the new immigrants who were not citizens of the Empire – a potential fifth column. The population of the Jewish settlement in Jerusalem dwindled during the War and had halved by its end.

On December 9, 1917, the Ottoman troops began their panicked retreat from Jerusalem. General Allenby, commander of the battle for the Land of Israel, arrived two days later and was greeted with much ado. The city officially surrendered to the British Empire. The exultant cries with which the British Army was received did not stop the continued suffering of the city’s residents (primarily the women).

The War Against Prostitution

Intense hunger and poverty were prevalent in the Jewish neighborhoods. There were over 3,000 orphans in the community of 26,000 people. Life in the shadow of deprivation, destitution, and lack of employment, compelled hundreds of women from the Jewish Yishuv, including young girls, to work in prostitution. They crowded together in the brothels established in Nachalat Shivah and Batei Miland (with the knowledge and approval of the British rulers). British soldiers who settled in Jerusalem were their main consumers.

The Jewish leadership of the city was well aware of the plight of the women working in prostitution, which became one of the main ordeals of the city’s Jewish residents: it was mentioned briefly in City Committee meetings in March 1918, and an entire sitting was dedicated to the topic in June. The identity of the girls and women who worked in prostitution was not the focus of these discussions. Instead, emphasis was placed on the damage caused to the neighborhoods by the objectionable occupation, and lengthy discussions about the impurity which defiled the holiness of the city’s Jews.

While the Jewish Committee in Jerusalem wasted its time on discussions focused on searching for culprits to blame, the women of the Jewish community instituted a series of flash initiatives to reduce prostitution in the city: firstly, they delivered evening classes to women to keep them away from work during “business hours”, and organized professional courses for young girls. The courses aimed to provide them with an education and alternative ways of earning a livelihood which had not been available to them.

When they saw that their endeavors bore fruit, the women of the community worked to involve the British Army authorities and the Jewish Committee of the city as well.

The women of the city didn’t stop there; they introduced other initiatives – distributing clothes to children in collaboration with the city committee and women of Hadassah, helping the hospital staff and taking thousands of orphans under their wings – first in an orphan assembly and later by bringing them to attend classes they arranged.

“Dr. Weizmann informs us of the saddening fact that due to the difficult conditions in the Land of Israel, prostitution and drunkenness developed in Jerusalem, there are five hundred Jewish prostitutes in Jerusalem alone, who lack desire to work in the factories and earn money easily.”

A vocal protest was organized in the Meah She’arim Yeshiva. Its goal was not to protect the women who had deteriorated to their current state against their will, but rather a vigorous denial of the evil fabrications disseminated by the Ashkenazi Committee.

The express prohibition against operations of the brothels in Jerusalem was only taken in September 1919. Many months had passed since the women of the various societies active in the city approached the military ruler – Colonel Storrs. It was thanks to the prompt action of the women of Jerusalem, who refused to look away and refused to blame the women working as prostitutes, that the phenomenon was almost completely destroyed even before the brothels in the city were finally ordered to close.