How the former director of the National Library of Israel played a key role in the "book diplomacy" of the 1950s and 60s... 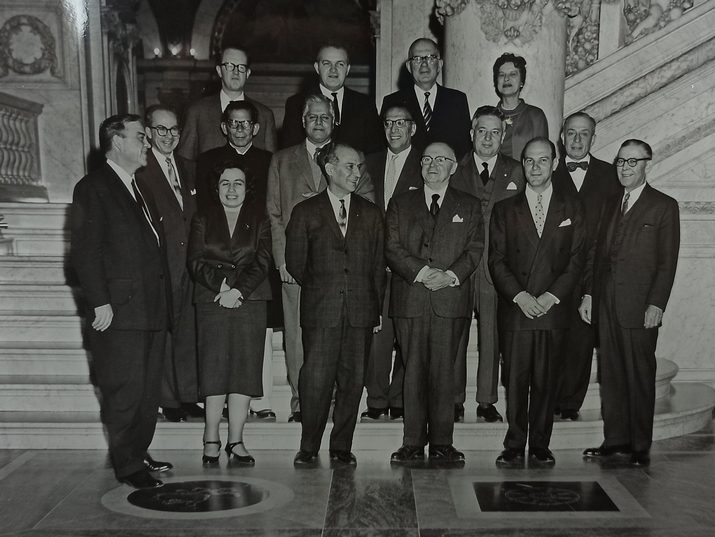 Curt Wormann, former director of the Jewish National and University Library, is seen in the back row of this group photo (2nd from the right), along with directors of national libraries from such countries as Iran, Iraq, Pakistan and Turkey, among others. November, 1961, the Curt Wormann Archives at the National Library of Israel.

In November of 1961, at the peak of the Cold War, librarians from all over the world came to New York to take their seats in the United Nations Plenary Hall. It was as if the international body’s diplomats had been supplanted by an assortment of bookish types from the four corners of the Earth. Among those gathered was Curt Wormann, the longtime director of the Jewish National and University Library in Jerusalem. His archives allow an insight into the role played by a handful of leading international Librarians in the cultural politics of the 1950s and 1960s. But they also reveal another story: the internationalization and professionalization of Israeli librarianship against the backdrop of Cold War politics.

But why did Curt Wormann and his colleagues from around the world travel to the United Nations in 1961? Among the hundreds of folders which can be found in the Wormann archives, there is one that contains documents and letters relating to the event at UN Headquarters in 1961. Let’s take a closer look at one of these letters, a typewritten carbon copy: At first glance, the document seems like a polite everyday exchange between colleagues: On December 19th, 1961, Curt Wormann wrote a letter to his colleague Josef Stummvoll, the director of the United Nations Library in New York.

As Wormann was formulating his letter, a year of heightened tensions between East and West  was coming to a close: The Berlin Wall was erected in August, and by October, American and Soviet tanks sat facing each other in the center of the divided city. Not far away from the place that would later become the borderline dividing East and West, in the Berlin district of Kreuzberg, a young Curt Wormann had begun his career as a librarian in the 1920s. By 1926, he was already director of the district library. Born into a German-Jewish Family in 1900, Curt Wormann devoted his professional life to the development of public libraries and higher education during the years of the Weimar Republic. But when the Nazis came to power, he was forced into retirement, losing his position as a result of the “Law for the Restoration of the Professional Civil Service”. Shortly after, he immigrated to Mandatory Palestine, together with his wife, the physician Dr. Carola Gottheil, and worked as a librarian at the Shaar Zion Public Library in Tel Aviv. Although his career had been violently interrupted by the Nazi regime, he soon gained a reputation within German-Jewish intellectual and cultural circles. In 1947, he was appointed director of the Jewish National and University Library in Jerusalem (today’s National Library of Israel). In this position, he would not only play a major role in gathering Jewish cultural treasures in Israel as part of “The Politics of Restitution”, he would also travel the world as Israel’s leading book diplomat.

In December 1961, Curt Wormann had just returned to his office in Jerusalem from New York, where he had taken part in an international librarians’ symposium on the occasion of the opening of the newly constructed United Nations Library building. With his letter to the UN Library director Josef Stummvoll, Wormann wanted to express his gratitude and appreciation “for the hospitality I enjoyed during my stay in New York as a guest of the United Nations” and “the possibility of taking part in the Symposium”. Indeed, thirty leading librarians from all over the world had been invited personally by the UN Secretary-General Dag Hammarskjöld to attend the Librarians’ Symposium dealing with librarianship and the UN Library’s role in international relations. When Curt Wormann received the invitation in Jerusalem, he immediately and happily accepted, replying with a telegram. Tragically, a few weeks before the library’s opening ceremony, Secretary-General Hammarskjöld, in office since 1953, died in a plane crash in Africa. The international librarians were deeply saddened, but decided to proceed as planned. They dedicated the new building to Dag Hammarskjöld, who had closely followed the construction of the new library building and who was also known as an ardent book collector. Thus, Curt Wormann addressed his letter of December 19th to Dr. Josef Stummvoll, the director of the “Dag Hammarskjöld Library of the United Nations”.

The UN Library’s new building fulfilled all the requirements of a modern library, and was financed by the Ford Foundation. Thus, both the building and the symposium reflect the globalization of librarianship after World War II within the framework of international cultural politics under American auspices. Knowledge, information, education, and thus libraries, as key infrastructure, were understood to represent a competitive advantage during the Cold War. Curt Wormann’s correspondence with Josef Stummvoll and other international colleagues, mainly from Europe and the United States, allow deep insight into their thought processes and roles as agents in the international cultural politics of the early Cold War era. In his letter to Josef Stummvoll, Curt Wormann described the New York UN Symposium as a “demonstration of world librarianship and a really important event in the development of international cooperation in our profession”. Indeed, this “world librarianship” – to use Wormann’s accurate description – was a network of leading international librarians who contributed to the internationalization and professionalization of librarianship through organizations like the United Nations or UNESCO. Founded in 1945, UNESCO defined its goal as – “contributing to the preservation of peace and security by promoting cooperation between peoples in education, science and culture […]”. Thus, Curt Wormann and his colleagues from the Jewish National and University Library and the Hebrew University perceived the membership of the young state of Israel in UNESCO since 1949 as a means of diplomacy in both external and internal politics. This included establishing and maintaining communication with other countries through UNESCO, developing librarianship in Israel through international cooperation, and defending the JNUL’s interests, mainly concerning the book collections which remained on Mount Scopus (an Israeli controlled enclave which was surrounded by Jordanian territory until the Six Day War of 1967).

However, UNESCO’s stated aim of overcoming cultural boundaries revealed its limitations during preparations for yet another important meeting of librarians, in 1958. As part of the UNESCO program, an international symposium on the role of national libraries was to take place in Vienna, where Josef Stummvoll served as director of the Austrian National Library (before his appointment as director of the UN Library). However, the UNESCO symposium in Vienna in 1958 was intended exclusively for librarians from European countries. Israel was excluded for geographical reasons and this made Curt Wormann’s participation impossible. However, Josef Stummvoll insisted on Wormann’s participation in a letter written to Luther Evans, the director-general of UNESCO, who also knew Wormann personally. In his letter, Stummvoll did not only describe Curt Wormann’s expertise in questions of librarianship, but he also underlined the truly European background of the German émigré who had started his career as the head of the public library in Berlin-Kreuzberg. Stummvoll’s intervention was a success and the UNESCO officials were convinced: Wormann was invited to the conference as an external expert. His conference report, National Libraries in our Time, which was published in Libri, the scholarly journal edited by the International Federation of Library Associations (IFLA), contributed much to Wormann’s international reputation.

While the meeting of European librarians in Vienna strengthened the ties between Curt Wormann and Josef Stummvoll, their first contact goes back to the early 1950s. As director of the Austrian National Library, Stummvoll was in contact with the JNUL and responsible for issues of cultural restitution, on which he collaborated mainly with Shlomo Shunami from the JNUL. Last but not least, Josef Stummvoll of Vienna and Berlin-born Curt Wormann shared the same mother tongue. Thus, Wormann could have easily written his grateful letter in German, as he had done with previous letters to Stummvoll. This time, Worman chose to write in English, thus expressing the international character of the United Nations Librarians’ Symposium, as well as that of their own professional and friendly relationship.

Indeed, while the history of librarianship in Mandatory Palestine and Israel is often presented as a history of knowledge transfer by German speaking émigrés, the archives of Curt Wormann depict him as one of the agents of the internationalization, professionalization, and institutionalization of Israeli librarianship during the first twenty years of statehood. In 1968, Wormann’s term as director of the Jewish National and University Library in Jerusalem came to an end, a role in which he had served as an agent of “cultural internationalism” (see the work of Akira Iriye). Even afterwards, he continued to be involved in international librarian associations and to further the cause of Israeli librarianship. He died in 1991. His personal archives are preserved in the library to which he dedicated his life’s work, waiting to be explored.

This project promotes the arrangement and description of archives of German-Jewish scholars, writers, and artists and encourages archive-based research in the fields of Cultural Transfer, the History of Science, the Migration of Knowledge, and the History of Ideas. It offers junior scholars and students the opportunity to combine academic research with archival practice and provide an essential foundation for new cultural and scholarly discussions, by making previously inaccessible personal archives, literary estates, and historical collections available to international research.   If you liked this article, try these: “Stranger Things” in Jerusalem: Goethe and Goebbels in the Ticho Family Garden A Murder in Mandatory Tel Aviv: The Orientalist as an Advocate Crossing the Divide: Walter Grab and the East-German Historical Establishment